Isaac could hinder GOP chance to define Romney at convention 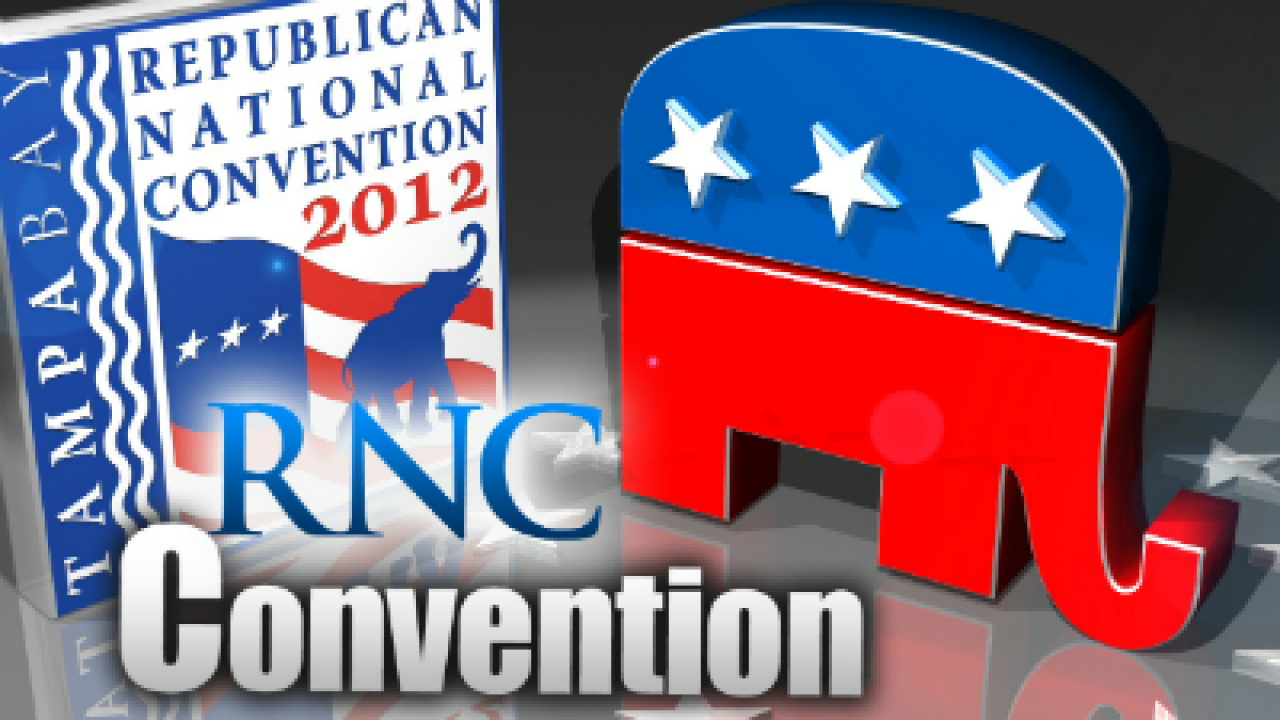 GOP officials already canceled Monday’s planned first day of the convention because of Isaac, the tropical storm growing to hurricane strength in the Gulf of Mexico off Florida.

That will be plenty of time to nominate the former Massachusetts governor, “tell the Mitt Romney story” and show why he is the right person to fix problems left unresolved by what Republicans called the failed policies of President Barack Obama, Priebus added.

Sen. John McCain, the Republican nominee in 2008 who had the first day of his nominating convention in Minneapolis, shortened because of a hurricane then threatening the Gulf Coast, agreed that losing one night is manageable.

However, McCain told NBC on Sunday that “it could be harmful if we lose more than that.”

In a sign of how badly the party wants to hold the convention to showcase Romney, GOP officials have not ruled out extending it by a day to Friday if necessary, a Republican source told CNN.

Romney and his wife attended church on Sunday. The opening hymn, with its chorus of “onward, ever onward,” reinforced the imagery of a tough struggle.

While the CNN/ORC International indicates a dead heat between Romney and President Barack Obama, new numbers released Sunday show that likely voters believe Obama is more in touch with their needs.

“The public gives Obama a big advantage over Romney on questions on caring about people and understanding their concerns,” said CNN Polling Director Keating Holland, adding that Romney’s strong points — in the minds of poll respondents — were his managerial skills and having a clear plan to solve the country’s problems.

According to the poll, 53% of likely voters say Obama cares about the needs of people, with 39% feeling the same way about the former Massachusetts governor. Obama leads by an equal margin when it comes to being in touch with the middle class, and six in 10 say Obama is in touch with the problems facing women today, with just over three in 10 feeling the same way about Romney.

Romney has a 48%-44% margin over Obama on managing the government effectively and a 6-point advantage on having a clear plan for fixing the nation’s problems. Both are within the survey’s margin of error.

“The challenge facing Romney at the GOP convention is to build on those managerial strengths while at the same trying to convince average Americans that he is in touch with their problems. Obama’s personal characteristics, for the moment, outshine Romney’s,” Holland said.

On specific issues, the poll results show a similar dynamic — Obama is generally ahead on foreign policy and social issues while Romney is generally preferred on economic issues.

According to the survey, likely voters prefer Obama’s policies on gay and lesbian issues by 59%-33% and choose Obama over Romney on abortion by 53%-40%. The president also has a 51%-44% advantage over Romney on foreign policy and a 50%-43% margin on terrorism.

The candidates were statistically even on the economy, with Romney’s 50%-46% advantage within the survey’s margin of error, and Romney holds a 10-point advantage on handling the federal deficit.

Priebus said Sunday that delaying the start of the convention was “the right thing to do,” adding that that most of Monday’s planned events would be folded into the remainder of the week’s schedule.

“Everything is going to be back to normal on Tuesday,” Priebus said, adding that some speeches might be shorter than originally planned.

The RNC chairman will open the convention on Monday, then quickly declare it in recess until the full proceedings begin on Tuesday afternoon, with Romney’s formal nomination expected a few hours later, organizers said. Romney will close the convention with his acceptance speech on Thursday night, which was the original plan.

On Sunday talk shows, Republicans said the convention must focus on Romney’s character and show how he can lead the nation to economic prosperity, which is the top issue with voters.

“It’s the vision of Mitt Romney versus the record of Barack Obama, and facts just are stubborn things,” Virginia Gov. Robert McDonnell told ABC, adding that “the middle class is hurting” and people want “results, not rhetoric.”

The Obama campaign, anticipating the Romney branding effort by Republicans, released a movie trailer-style video Sunday that previewed a “do-over” moment for Romney.

In a statement accompanying the video, the Obama campaign said it is “presenting Americans with an epic cinematic preview of Mitt Romney’s ‘convention reinvention’ — the Do-Over moment that voters have grown to expect — because they’ve seen this movie before.”

Responding to the video, Romney’s campaign said Sunday the president was relying on “negative attacks” as a way to distract from his own record.

However, Los Angeles Mayor Antonio Villaraigosa told ABC that Romney is vulnerable to being portrayed as a political opportunist because of the right-wing positions he adopted during the rugged primary campaign against conservatives such as Rick Santorum and Newt Gingrich.

“I suspect that they are not going to be able to Etch-a-Sketch their way out of this campaign,” Villaraigosa, a Democrat, told CNN with a reference to a Romney aides comment earlier this year about resetting the campaign message. “They’re not going to be able to put away all the things they said in the primary and all the things they have in their platform right now.”

Last week, incendiary comments by conservative Republican Rep. Todd Akin of Missouri ignited a political firestorm about rape and abortion as the Romney team sought to build momentum up to the convention.

Akin, who won Missouri’s Republican Senate primary to challenge Democratic Sen. Claire McCaskill in November, told an interviewer that women have an undefined biological response to what he called “legitimate rape” that oftentimes prevents pregnancy.

Romney and a full spectrum of GOP politicians — from the Republican National Committee to tea party groups — condemned Akin’s comments and called for him to drop out of a race considered crucial to Republican hopes of winning a Senate majority.

Akin apologized and called his remarks incorrect, but he has refused to end his Senate bid. The imbroglio has given new life to McCaskill, considered the most vulnerable Democratic senator running, and caused chagrin within the Republican establishment.

Sen. Marco Rubio, R-Florida, told CBS that Akin’s statements “make it much more difficult — borderline impossible, perhaps — for him to win that race.”

A further concern is that Akin’s comments focused attention on the volatile abortion issue in the run-up to the convention, when the Romney campaign wanted to talk about the candidate’s prescriptions for high unemployment and slow economic growth under Obama.

Instead, Romney and running mate Paul Ryan, the conservative House Budget Committee chairman from Wisconsin, have been asked repeatedly about differences between their personal views on whether abortion should be banned in all cases or permitted only for pregnancies from rape, incest or that threaten the life of the mother.

Romney’s Mormon faith supports the narrow exceptions, while Ryan — a devout Catholic — supports a blanket ban. The campaign has made clear the ticket supports Romney’s stance, which also contrasts with the party platform that convention delegates are scheduled to vote on this week.

In an interview with Fox broadcast on Sunday, Romney again answered questions on the Akin comments, saying “it obviously is being used by Democrats to try and cast a shadow on our entire party, and it’s not.”

At the same time, Romney noted that Democrats were “wise enough to understand” that Akin’s comments can hurt Republicans.

In addition, polls show Obama continuing to hold a big lead over Romney among Hispanic-Americans, the fastest-growing demographic group in the country.

Conservative opposition to immigration reforms — such as the policy put in place by the Obama administration to stop deporting some young illegal immigrants who came to America as children — prevents GOP gains with Hispanic-American voters, some Republicans say.

“Our demographics are changing, and we have to change not necessarily our core beliefs but the tone of our message and the message and the intensity of it for sure,” former Florida Gov. Jeb Bush told NBC on Sunday. “Long-term conservative principles, if they’re to be successful and implemented, there has to be a concerted effort to reach out to a much broader audience than we do today.”

Bush noted that some Republicans benefit in their conservative districts by using immigration as a “wedge issue” to build right-wing opposition to Democrats.

“I don’t think that’s right for our country,” he said. “You can’t ask people to join your cause and then send a signal that you’re really not wanted. It just doesn’t work.”

Al Cardenas, the chairman of the American Conservative Union, told CNN that Romney was still in “the early stages” of getting to be known by the Hispanic-American community.

“Can we get this done in 75 days? I think enough to win this election, and then it’s a long-term project to do a lot better institutionally as a party,” Cardenas said.

Like previous Romney spots, the new ad includes a claim that, “As president, Barack Obama cut $700 billion from Medicare to pay for Obamacare,” the 2010 health care reform law despised by Republicans.

The claim cites a report from the Congressional Budget Office that shows repeal of the president’s health care law would mean an additional $716 billion in spending on Medicare. However, it ignored the same report’s finding that the additional spending would come from rising costs and inefficiencies that the health care law would have addressed, rather than restoring money cut from Medicare.

The Obama campaign has called the Romney claim on Medicare false, citing the CBO report, and repeatedly attacked the Medicare reform plan proposed by Ryan that would partially privatize the government-run health care program for senior citizens. Democrats claim the Republican proposal would “end Medicare as we know it,” while Ryan says his plan is the kind of reform necessary to ensure Medicare’s long-term solvency.

According to the poll results released Sunday, likely voters are evenly divided between the candidates on the Medicare issue.