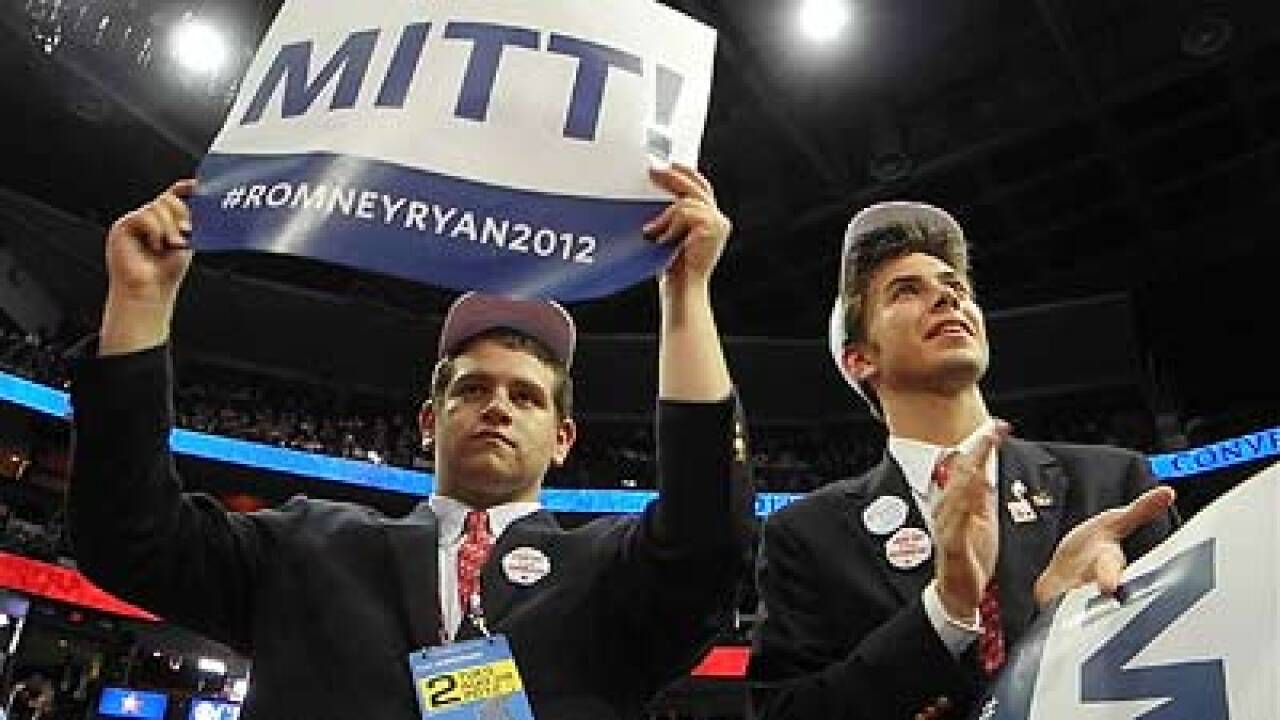 Mitt Romney delegate on the floor of the RNC during the roll call for nomination of the Republican Presidential candidate.

By Tom Cohen
TAMPA, Florida (CNN) -- Mitt Romney officially clinched the GOP presidential nomination, then watched his wife deliver a political broadside with a personal touch at the Republican National Convention that seeks to portray the multimillionaire former businessman as a champion of working-class Americans who struggle under the policies of President Barack Obama.

The storm-delayed convention continues Wednesday with Romney's running mate, Rep. Paul Ryan, and former Secretary of State Condoleezza Rice taking the stage to make their case for why the GOP ticket can do better if elected in November.

Tuesday's first full day of proceedings came as Hurricane Isaac churned across the Gulf of Mexico and slammed into the Louisiana coast, raising concerns among Republican organizers that the convention crucial for defining Romney to the American people would get overshadowed by a dangerous storm on the eve of the seventh anniversary of Hurricane Katrina's devastating landfall.

Determined to proceed, GOP officials expressed their best wishes for people in the path of the storm and pushed ahead with the convention agenda designed to frame the election as a referendum on Obama's presidency while attempting to turn Romney's biggest political vulnerabilities into campaign advantages.

To roaring cheers in the packed Tampa Bay Times Forum, the delegation from New Jersey put Romney above the 1,144-delegate threshold needed to claim final victory after a rugged Republican primary campaign that saw momentum swings nearly every week and bitter attacks by GOP colleagues.

The 2,200-plus convention delegates also approved a conservative platform that called for less government, opposed same-sex marriage and endorsed a "human life amendment" to ban abortion with no specific exceptions for cases of rape, incest or when the mother's life is threatened.

Romney and Ryan, who also was endorsed by delegates Tuesday, will be formally nominated on Thursday, and Romney's acceptance speech that night will conclude the convention with the most high-profile political moment in the former Massachusetts governor's career.

On Tuesday, speeches accused Obama of failed leadership and undermining the American dream, with speaker after speaker emphasizing their own humble beginnings as descendants of immigrants who worked hard to achieve success for their families and never expected government help or handouts. Virtually every speaker took umbrage with Obama's comment on the campaign trail that "you didn't build it" in reference to successful businesses that received government help along the way.

Ann Romney's speech, among the most anticipated of the convention, was billed as an attempt to personalize a candidate who comes off as stiff and out-of-touch with the public at times. She mixed homespun anecdotes, such as repeated references to their first date at a high school dance, with an astute political touch to urge Americans to trust her husband to fix the nation's problems.

In particular, Mrs. Romney touched on issues considered weaknesses for her husband -- support from women, his personal wealth -- and encouraged people to look closely at his record and get to know him for the warm and loving man she met at that dance.

She avoided any mention of controversial issues such as the anti-abortion stand in the convention platform that polls show is opposed by most Americans, instead focusing on the day-to-day challenges facing women throughout the country.

"I'm not sure men really understand this, but I don't think there's a woman in America who really expects life to be easy," Mrs. Romney said. "We're too smart to know there aren't easy answers but we're not dumb enough to expect there aren't better answers."

She concluded by declaring "you can trust Mitt," adding: "He loves America. He will take us to a better place, just as he took me home safely from that dance."

As the crowd cheered and applauded, Romney came out in his first appearance at the convention to hug and kiss his wife, telling her: "You were fabulous."

The Obama campaign has made an issue of Romney's personal wealth, challenging him to release more than two years of tax returns -- like the 12 years of returns his father made public when running for president in 1968 -- and questioning whether his career as a venture capitalist benefited workers or prepared him to deal with a sluggish economy.

In her speech, Mrs. Romney addressed the Democratic attacks head-on, noting her husband's success throughout his career and expressing amazement that such a record was being criticized.

"If the last four years had been more successful, do we really think there would be this attack on Mitt's success?" she said.

In reference to Obama, Priebus said "he hasn't even run a garage sale or seen the inside of a lemonade stand." The nation needs a president "with real experience in a real economy," Priebus added. "Mitt Romney will be that president."

Other speakers continued the effort by Priebus to denigrate Obama's presidency and depict their party and candidate as the protectors of the American dream -- an issue at the heart of the Obama campaign's messaging.

"The American people are still asking 'where are the jobs,' but President Obama only offers excuses instead of answers," U.S. House Speaker John Boehner told the delegates. "His record is a shadow of his rhetoric. Yet he has the nerve to say that he's moving us forward, and the audacity to hope that we'll believe him."

Rep. Dan Benishek of Michigan complained earlier that Democrats in Washington were "spending away our children's and grandchildren's futures," while Rep. Tim Scott of South Carolina serenaded Obama with a chorus of the Ray Charles tune, "Hit the Road, Jack."

At a campaign event in Iowa, Obama said Tuesday that he expected the GOP convention to be "a pretty entertaining show."

"I am sure they will have some wonderful things to say about me," the president said. "But what you won't hear from them is a path forward that meets the challenges of our time."

New Jersey Gov. Chris Christie concluded the first night of convention speeches with a keynote address that declared Republicans were willing to face the tough issues and find solutions that work, instead of taking the easy way out and pandering for voter support.

"Leadership delivers. Leadership counts, and leadership matters," Christie said, recounting his own record of reforms as a GOP governor in a majority Democratic state.

"Mitt Romney will tell us the truths we need to hear" and solve the problems worsened by an "era of absentee leadership in the White House," he added.

In a sign of lingering internal division in the party after a rugged primary campaign won by Romney, rival candidate Rep. Ron Paul of Texas was thronged by supporters when he entered the convention floor before Tuesday's session convened. Some Paul supporters shouted "let him speak," referring to their candidate's exclusion from the convention agenda.

Paul supporters later protested a rule change adopted by the convention that they believe will hinder their kind of grassroots campaign in the future. They also cheered wildly when Paul received any delegates in the state-by-state roll call.

For Romney, 65, the nomination puts him one step away from the goal he first sought in 2007 by running for president after serving as a Republican governor for four years in traditionally Democratic Massachusetts.

He lost to veteran Sen. John McCain in the Republican primary campaign in 2008, then spent the next two years preparing for another try. Though rivals challenged his conservative credentials in the primaries, Romney emerged victorious but continues to walk a political tightrope in trying to galvanize right wing support while also appealing to moderates and independent voters.

The latest CNN/ORC International poll indicates a dead heat between Romney and Obama, with new numbers released Sunday showing that 53% of likely voters believe Obama is more in touch with their needs, compared with 39% for Romney.

Obama leads by an equal margin when it comes to being in touch with the middle class, and six in 10 say Obama is in touch with the problems facing women today, with just over three in 10 feeling the same way about Romney.

Romney leads 48% to 44% over Obama on managing the government effectively and has a six-point advantage on having a clear plan for fixing the nation's problems. Both figures are within the survey's margin of error.

"The challenge facing Romney at the GOP convention is to build on those managerial strengths while at the same trying to convince average Americans that he is in touch with their problems. Obama's personal characteristics, for the moment, outshine Romney's," CNN Polling Director Keating Holland said.

Republicans say the Republican convention must focus on Romney's character and show how he can lead the nation to economic prosperity, which is the top issue with voters. On Tuesday, speeches by top party officials were interspersed with testimonials by working class Americans who described economic hardship blamed on Obama's policies, which Republicans say stifle growth and job creation through over-regulation and high taxes.

The GOP platform contains traditional conservative planks, including support for the "human life amendment" with no exceptions to an abortion ban. That runs counter to overall public opinion in America, especially among women, a demographic that polls show favoring Obama far more than Romney at this point.

Romney and Ryan, the conservative House Budget Committee chairman, have been asked repeatedly about differences between their personal views on whether there should be limited abortion exceptions.

Romney's Mormon faith calls for the narrow exceptions, while Ryan, a devout Catholic, supports a blanket ban. The campaign has made clear the ticket supports Romney's stance, which contrasts with the party platform.

The only speaker Tuesday night to touch on the abortion issue was conservative Rick Santorum, who attacked Romney's conservative credentials in the Republican presidential primary campaign. In his speech, the former senator from Pennsylvania backed Romney to end what he called destructive policies of Obama that undermine American values.

"I thank God that America still has one party that reaches out their hands in love to lift up all of God's children - born and unborn - and we say, and we say that each of us has dignity and all of us have the right to live the American Dream," Santorum said to cheers.