Eastwood, the empty chair and the speech everyone’s talking about 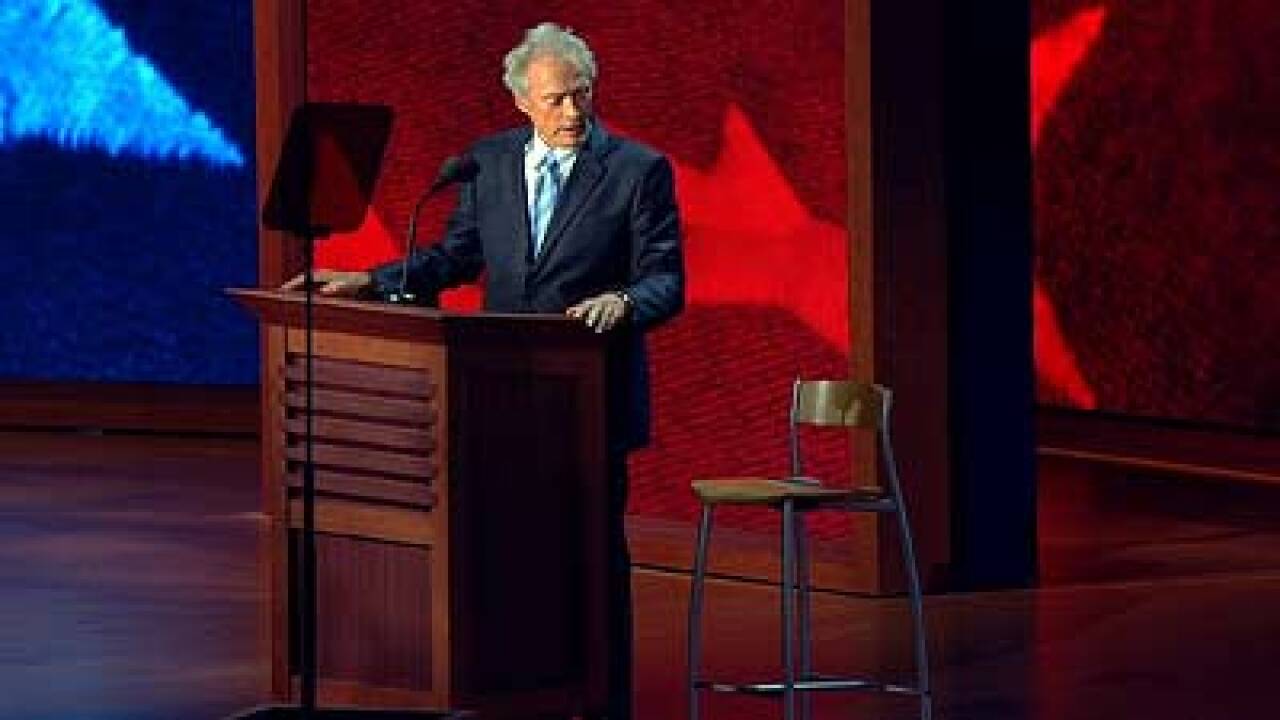 TAMPA, Florida (CNN) — Actor and director Clint Eastwood made the day of the GOP faithful at the Republican National Convention when he gave a surprise speech Thursday night in which he laid out what he sees as the good, the bad and the ugly state of American political affairs.

And he did it all while addressing an “invisible” President Barack Obama sitting in an empty chair. Eastwood, who played the iconic tough guy character “Dirty Harry” during his long career in Hollywood, fired up the party base when he said he cried when Obama was elected and cried even harder years later when millions were out of work.

“It’s a national disgrace,” Eastwood said. “It may be time for someone else to come along and solve the problem.”

At times, Eastwood sent the crowd into laughing fits when he pretended Obama was offering colorful objections.

“What do you want me to tell Romney?” Eastwood asked the empty chair. “I can’t tell him to do that to himself … you’re getting as bad as Biden … of course we all know Biden is the intellect of the Democratic Party. Kind of a grin with a body behind it …”

The RNC had left room for a “mystery guest” on its Thursday schedule and announced Thursday that Eastwood would speak. Late Thursday afternoon, Eastwood walked through the convention floor for a brief rundown of the night’s events.

His ad-libbed speech later in the evening was decidedly political, bitingly satirical and more than a bit, well….rambling.

“I think if you just step aside and Mr. Romney can kind of take over. You can maybe still use a plane,” Eastwood said.

Seconds after Eastwood finished his speech, the Twittersphere was buzzing with response.

Larry Sabato, director of the University of Virginia’s Center for Politics tweeted:

“I’d feel better if I knew for sure that Clint doesn’t see anyone in the chair. :)”

Actor George Takei tweeted that he could use the Eastwood tactic at next week’s Democratic National Convention.

Actress Mia Farrow tweeted that she thought Florida Sen. Marco Rubio, who introduced Mitt Romney later in the evening, was the night’s best speaker — with one problem: “Rude to ignore invisible Obama sitting right there.”

The Twitter handle “Invisible Obama,” which said it was sitting “Stage left of Clint Eastwood,” quipped that “The GOP built me.” An hour after Eastwood’s speech, it already had 20,000 followers. The move spawned a new trend with people posting photos of themselves pointing at empty chairs with the hashtag “eastwooding.”

Comedic takes on Eastwood’s speech went viral and all of a sudden, what might have been for some younger viewers a ho-hum speech by an octogenarian actor became both a national joke and a means to engage in the political process, political experts said.

“It was campaign malpractice that the Romney managers sent out a dithering, clueless Clint Eastwood. The Romney campaign will be lucky if Eastwood’s antics don’t linger as a national punch line,” Sabato wrote on his “Crystal Ball” blog.

Sabato also noted that fallout from Eastwood’s vaudevillian like schtick overshadowed “Sen. Marco Rubio, whose dazzling speech to his home state conclave might end up being as nationally invisible as the imaginary Barack Obama sitting in Clint’s stage chair.”

A Romney campaign aide addressed Romney’s appearance later, saying, “Judging an American icon like Clint Eastwood through a typical political lens doesn’t work. His ad-libbing was a break from all the political speeches, and the crowd enjoyed it. He rightly pointed out that 23 million Americans out of work or underemployed is a national disgrace and it’s time for a change.”

Eastwood, a longtime Republican, endorsed Romney at an Idaho fundraiser at the beginning of August, where he told reporters that he was backing the GOP presidential candidate “because I think the country needs a boost somewhere.”

He endorsed Sen. John McCain in the 2008 presidential election.

Earlier this year during in an ad that aired during the Super Bowl, Eastwood’s familiar, sandpaper voice spoke to Americans about the nation’s economic woes. The ad featured close-up shots of factory workers and black-and-white photos of Midwest families — images some political watchers flagged as subtly political.

“It’s halftime in America, too,” said the 81-year-old Hollywood legend. “People are out of work, and they’re hurting. And they’re all wondering what they’re gonna do to make a comeback. And we’re all scared because this isn’t a game. The people of Detroit know a little something about this. They almost lost everything. But we all pulled together, now Motor City is fighting again.”

Eastwood said any implication of politics was baseless. Stars react to Clint Eastwood.