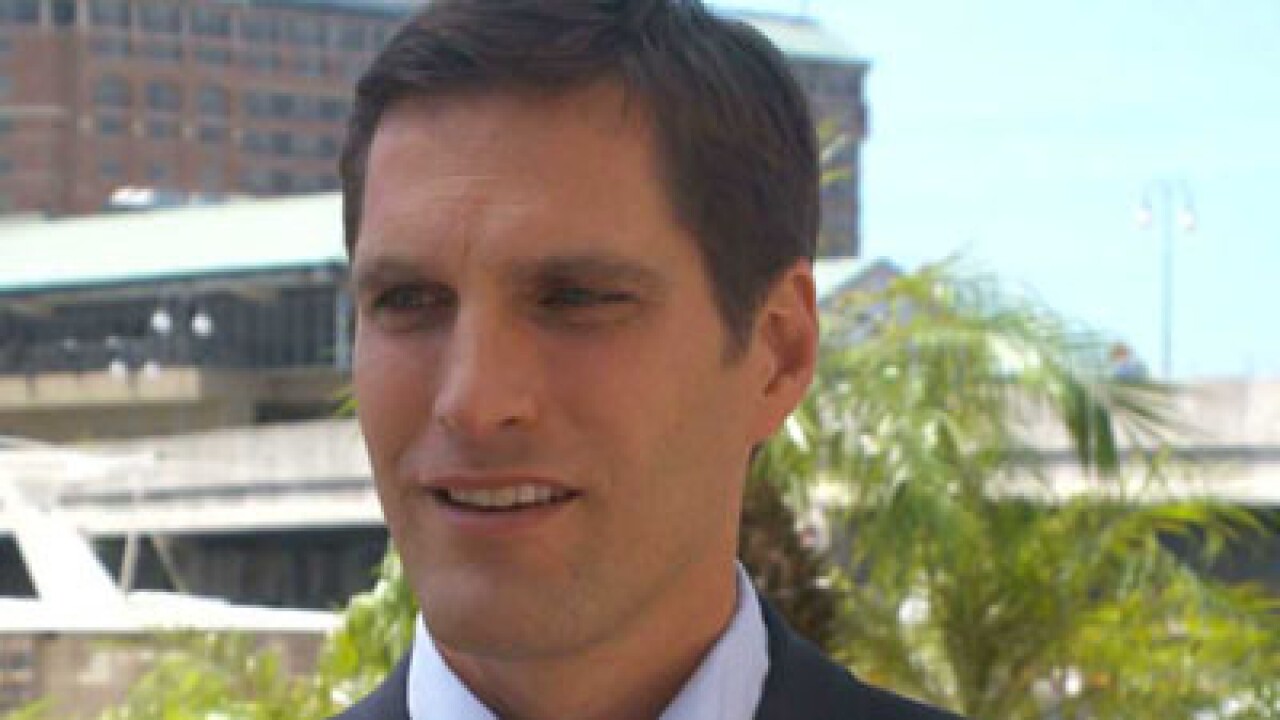 MAX ROTH: We’ve seen pictures of your dad with the grandkids. What does that do for him?

JOSH ROMNEY: It’s who he is. I think people want to know who my dad is and that is who he is. He loves those grandkids. That’s why he’s in the race. He looks at their future in this country and recognizes it’s in jeopardy and the debt crisis that we have right now, all the things that are happening in this country. It’s his grandkids who are gonna have to face the penalty for it so he’s fighting for kids of that generation to make sure they have the same America, the same hopes and dreams in this country that he was able to have so that’s why he’s in the race.

MR: Having them around him here in the hotel, does that just makes him at home. Does that kind of make him who he is and remind him what’s important.

JR: Yes. He doesn’t get to see them enough these days and so for him to have a chance to do that. They were just up there tackling him in one of the conference rooms and just jumping all over him and for him to do that. It’s a good way to take his mind off of everything else that’s happening and just kind of focus on the family for a bit.

MR: What do you want Americans to know about your dad after tonight?

JR: I hope they see why he’s in this race, and what he’s doing this for. My dad does not need this as an ego trip or anything like that. He’s in this for the right reasons. He wants to help people. He’s been blessed extraordinarily. He wants to be able to give back to people, give back particularly to those in the middle class who are suffering so much right now under this recession, to restore the economic vitality in this country, to ensure we remain the greatest nation on earth.

MR: Your mom, on Tuesday night. She was terrific. How did you feel about that when you were watching her?

JR: We were pretty emotional about that. I was tearing up a bit. I was just so proud of her. When you think of where she’s come in these last twelve years, when she first came out to the Salt Lake Olympics, she’d been diagnosed with MS and she was struggling so much, to be up introducing my dad like that, talking about him and talking about the family giving a different side of him, it was a proud moment for me. I was just so proud to see her up there doing that.

MR: It was amazing because it was a prepared speech but she was up there, she was laughing, she was shouting to the crowd, it was, it seemed so genuine.

JR: I think she added a lot of her own touches there. She I think really felt the energy of the crowd. She loved it and had a really good time. Apparently wasn’t nervous at all the whole time. We were nervous for her but she wasn’t nervous at all, just had a really good time up there and I think people got to see who she is and what a great woman she is.

MR: How much have you gotten to know Paul Ryan?

JR: Not very well at all yet. We’re hoping to get to know him better over the next few weeks and months, but I have a tremendous amount of respect for him. Just watching his speech last night I was inspired by it. He is a guy, you know there are not a lot of politicians who are in this for all the right reasons. You look at my dad, and a guy like Paul Ryan. These are guys who really want to solve the problems. Paul’s been in congress for 14 years. He’s been working from day one to find solutions. Not just complain and whine and talk, but actually find solutions, present ideas and really think things through. So that’s I think what attracted my dad to him. These are guys that get stuff done and the two of them together are going to be a team in Washington.

MR: What’s the schedule going to be like for you and your brothers after tonight?

MR: Is this something you want to do or does it feel like an obligation?

JR: A little of both. My dad’s my hero, so if I’m gonna be on the campaign trail talking about him, it’s just an honor and privilege, and I love doing that. You know at the same time you start to miss your kids and wife a little bit but this is something that’s so important for this country, we feel like we gotta do it.