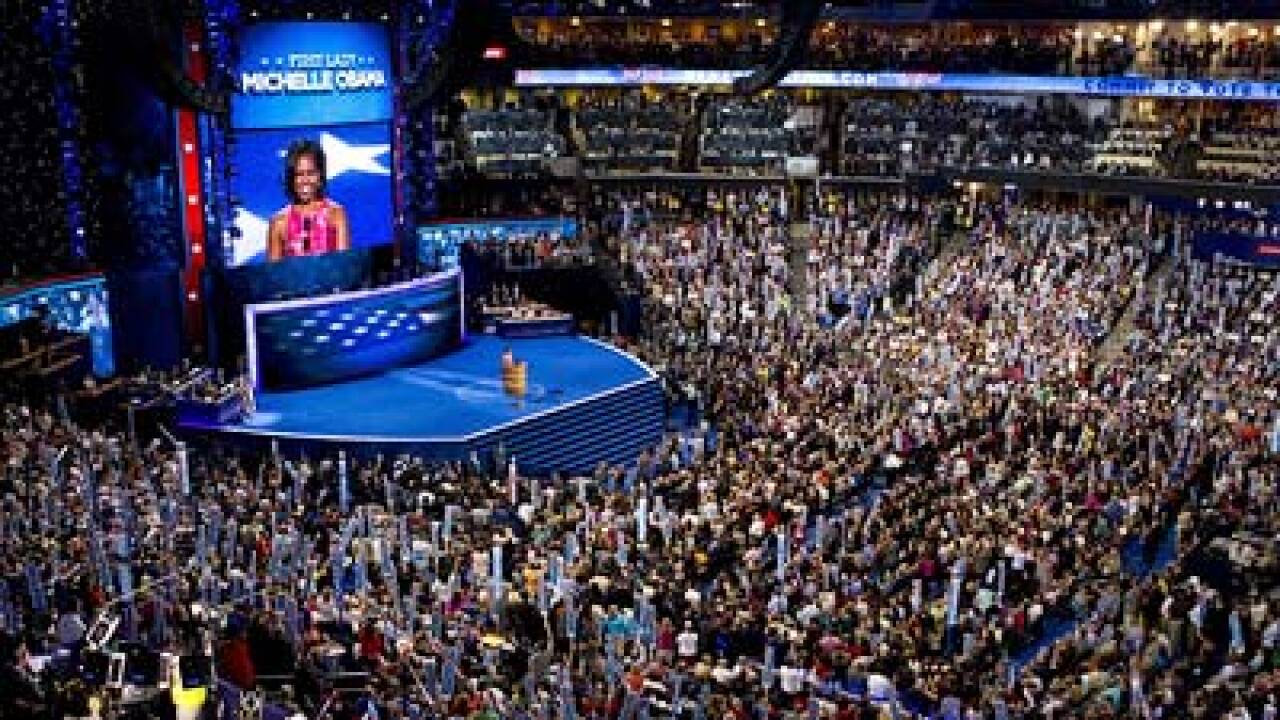 CHARLOTTE, North Carolina (CNN) -- A Democratic National Convention vital to President Barack Obama's re-election bid will hear from former President Bill Clinton on Wednesday after the first lady and other opening night speakers urged supporters to fight for a man they portrayed as a strong leader committed to equal opportunity for all.

Facing a tight race and Republican attacks that they have made things worse while in power, Democratic organizers want their three-day convention to emphasize the tough decisions Obama has made so far and the additional steps needed to bolster the middle class.

The first night couldn't have gone much better, according to CNN Senior Political Analyst David Gergen, who said: "If they have two more nights like this, they could possibly break this race open."

Speech after speech lambasted Romney and Republicans, accusing them of being out of touch and politically divisive at a time requiring national unity. Seeking to further strengthen Obama's advantage with women, Hispanic Americans and young voters, the Democratic speakers hailed the president for promoting health care reforms, supporting gay marriage and ending deportations of some young illegal immigrants.

Michelle Obama offered a personal perspective on why her husband should be re-elected, telling the convention that the same values she fell in love with guide him each day in the White House.

"In the end, for Barack, these issues aren't political, they're personal," she said, adding: "Barack knows the American Dream because he's lived it, and he wants everyone, everyone in this country to have the same opportunity, no matter who we are, or where we're from, or what we look like, or who we love."

Massachusetts Gov. Deval Patrick earlier challenged Obama supporters to be more forceful in supporting the president's record in the face of unrelenting Republican attempts to discredit the administration's accomplishments, such as ending the Iraq war and delivering "the security of health care to every single American in every single corner of the country."

"It's time for Democrats to grow a backbone and stand up for what we believe," he said to prolonged cheers.

Health and Human Services Secretary Kathleen Sebelius defended the 2010 health care law despised by Republicans, saying the changes that prevent insurance companies from denying coverage for pre-existing conditions and allow parents to keep their children on family policies up to age 26 were "what change looks like."

San Antonio Mayor Julian Castro in his keynote address declared, "Mitt Romney, quite simply, doesn't get it," later adding: "We know that in our free-market economy, some will prosper more than others. What we don't accept is the idea that some folks won't even get a chance."

Romney and Republicans "are perfectly comfortable with that America. In fact, that's exactly what they're promising us," Castro said.

"Trust comes from transparency, and Mitt Romney comes up short on both," Reid said.

In a video played in the Time Warner Cable Arena where the convention opened, former President Jimmy Carter said Obama prioritized the middle class in making the difficult decisions required of the nation's highest office.

"He has done it all in the face of bitter, unyielding, in fact unprecedented partisan opposition," Carter said in reference to congressional Republicans.

The Romney campaign said no amount of rhetoric could mask what spokeswoman Andrea Saul called Obama's "record of disappointment and failure."

"On the first night of President Obama's convention, not a single speaker uttered the words 'Americans are better off than they were four years ago,' " Saul said in a statement, adding that "the American people will hold President Obama accountable for his record."

Obama to accept nomination on Thursday

The convention will conclude Thursday with Obama accepting his party's nomination exactly two months before the November 6 election.

After the 46th Democratic National Convention was gaveled to order, the more than 5,500 delegates adopted a party platform that emphasizes middle-class opportunity while differing sharply on key issues with the Republican version endorsed at last week's GOP convention.

Newark Mayor Corey Booker energized the first session with a rousing call for delegates to pass the platform that represented "our fundamental national aspiration."

To applause and cheers, Booker said voters in November faced a choice between GOP policies offering either "a country of savage disparity favoring the fortunate few" or the Democratic goal of equal opportunity for all, adding: "This is our American mission."

Later, Chicago Mayor Rahm Emanuel recalled the litany of crises that greeted the Obama administration when it assumed power in January 2009: a Wall Street meltdown, economic recession, wars in Iraq and Afghanistan, a collapsing auto industry.

Other speakers told how Obama's decision to bail out the struggling auto industry saved vital jobs and kept a mainstay of the U.S. economy afloat. The goal was to contrast a politically unpopular decision -- spending tax dollars to help a private industry -- with Romney's call at the time to let Detroit go bankrupt. Romney now says he advocated a managed bankruptcy similar to the eventual result under Obama.

Senior campaign officials told CNN that the convention has three main objectives: to outline the clear choice facing voters, to highlight Obama's leadership in championing necessary but politically unpopular steps such as health care reform and the auto bailout, and to present a detailed plan for creating jobs for the middle class.

The Democratic platform focuses on improving the economic situation for middle-class Americans, and also contains language endorsing same-sex marriage and abortion rights that directly contrasts with the Republican platform. In a break from past conventions, the platform does not include the word "God" or label Jerusalem as the capital of Israel, two more issues that differ from Romney and Republicans.

Romney's campaign is focused on the question of whether Obama has made life better for Americans, arguing that continued economic woes show that White House policies have failed to deliver promised recovery from the recession that began during the previous Republican administration.

The "are you better off" strategy was famously employed in 1980 by Ronald Reagan, who asked voters that question when running against the incumbent Carter at a time of national economic woes. Reagan went on to win, and the Romney campaign has repeatedly invoked his name this year while seeking to link Obama and Carter as failed leaders.

Romney's running mate, Rep. Paul Ryan of Wisconsin, has led efforts to link Obama with the Carter legacy, telling a campaign stop on Tuesday in Westlake, Ohio, that "when it comes to jobs, President Obama makes the Jimmy Carter years look like the good old days."

"If we fired Jimmy Carter, then why would we rehire Barack Obama now?" Ryan said to cheers. He later told an Iowa event that the national debt reached $16 trillion Tuesday, which he called "a serious threat to our economy."

Obama and Vice President Joe Biden have fought back against the GOP attack line, telling supporters that the nation is better off now than it was when their administration took office in January 2009.

In Norfolk, Virginia, on Tuesday, Obama criticized Romney for failing to detail his economic plans, calling them "retreads of the same old polices that have been sticking it to the middle class for years." He cited the health care reform law he championed and financial industry reforms that followed the Wall Street meltdown as examples of accomplishments under his leadership that Romney has pledged to repeal.

The back-and-forth between the campaigns is part of their struggle to define the election in the minds of voters. Republicans want it to be about Obama's presidency, while Democrats seek a choice between differing political ideologies on the size and role of government.

In particular, Republicans seek to shrink the size of government and end chronic federal deficits and rising national debt through reduced spending, reforming entitlement programs such as Social Security, Medicare and Medicaid and slashing taxes on businesses and individuals as a spur for economic growth.

Obama and Democrats argue that a deficit reduction plan also needs additional revenue, and they propose allowing tax rates on income of more than $250,000 for families and $200,000 for individuals to return to higher levels from the 1990s.

Republicans oppose any kind of tax increase, and the impasse over that issue has been the main impediment to a comprehensive deficit reduction agreement during Obama's first term.

Close race ahead of November

The race overall is very tight, with a new poll Tuesday showing Romney received little bounce from last week's convention intended to introduce him to voters turning their attention to the presidential race.

The CNN/ORC International survey also indicates that less than 40% of registered voters said the GOP convention made them more likely to vote for Romney. At the same time, Romney got a slight bump in his favorable rating, and on being in touch with the middle class and women, although he still trails Obama on those two questions.

CNN's previous poll, released as the Republican convention got under way, indicated that 49% of likely voters backed Obama, with 47% supporting Romney, a statistical tie. In the new survey, which was conducted after the GOP convention, both the president and Romney are at 48%.

"The Republican convention had at best a mild effect on the presidential race, and from a statistical viewpoint, no effect at all," said CNN Polling Director Keating Holland.