RIVERTON, Utah -- Unified Police are looking for three suspects they say released an aerosol chemical at a Riverton Walmart.

The incident happened at about 4:15 p.m. The store, located at 13502 S. Hamilton View Drive (3550 West), was evacuated and the store remains closed through Sunday morning.

Officials are determining if food items in the store, namely the produce, are safe to sell and consume.

Approximately 80 people were affected by the chemical. Most were treated at the scene, however, a woman and a child were taken to the hospital where they are in stable condition.

Cliff Burningham, a Unified Fire Department spokesman, said the chemical may be pepper spray. Police are still working to identify the chemical substance.

Police are seeking two males and one female in connection with incident.

The suspects are about 18-19 years old. One of the males was in all black and a cowboy hat. Police said they left the store in a Dodge sedan.

"It very much looks like it was intentional," said Lt. Justin Hoyal, Unified Police Department. "These three individuals walking together. The one male was holding the canister down toward the ground and spraying it as he was walking through the aisles."

Unified Police have released surveillance photos in hopes the public will recognize these suspects. If anyone has any information, please call the Unified Police Department at 801-743-1000. 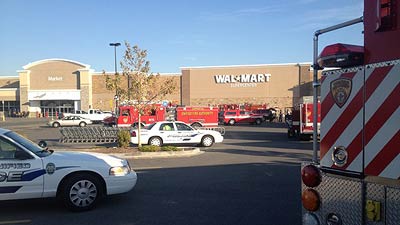