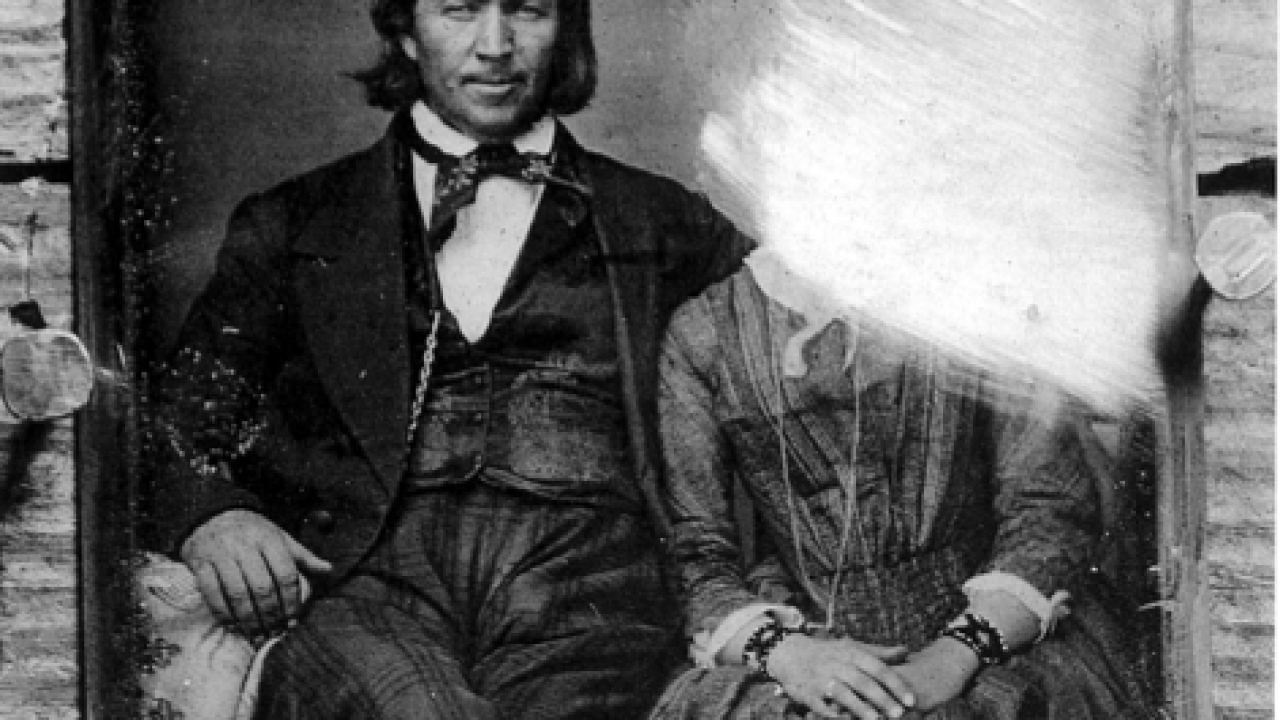 SALT LAKE CITY -- A mysterious image of early Mormon leader Brigham Young is raising new questions about his relationship with a Native American woman, and whether she was his adopted daughter or his long-forgotten wife.

A Daguerreotype known in historical archives as "Brigham Young and Unknown Wife" shows the founder of the state of Utah with one of his wives. The woman's face has literally been erased from history. It was apparently scratched out in an effort to conceal her identity.

But a photographer claims his investigation has revealed her identity: Sally Young, a woman known in historical records as Brigham Young's adopted Native American daughter. Brent Herridge believes she is actually one of his wives.

Historical archives claim Sally Young was kidnapped from her tribe and tortured. Her body was cut with knives and hot ashes poured on the wounds. She was sold by another tribe to Mormon settlers. It was common practice for Indian slaves to be sold by other tribes. Mormon pioneers sometimes bought them in an effort to prevent them from being executed.

Sally Young eventually wound up in one of Brigham Young's homes. Records say he had as many as 56 wives.

Herridge said he first came upon the image when he was hired to appraise the original Daguerreotype. He was intrigued by the face of the Mormon leader.

"If you look at that picture of Brigham with Sally, Brigham has probably the first smile that was ever recorded of him," he said.

Herridge said he looked at the wedding rings and the tortured hands, which matched a later portrait of Sally Young. He said it also matches with other records he has uncovered about Brigham Young's relationship with the Native American woman.

Sally Young had someone else who wanted her for his wife. Records indicate Sally Young was pursued repeatedly by local tribal Chief Kanosh. She eventually did marry him and moved to central Utah (where the town of Kanosh is now).

She died at age 38. Some historical records claim she was murdered by a jealous wife of Chief Kanosh. When he learned of Sally's death, he ordered that woman to be killed. Herridge calls that account a "folk story," and said he believes Sally Young died of a broken heart.

Her disappearance from historical records -- and the image in question -- may have been political, Herridge said. Sally Young's status as a Native American and a polygamist may not have sat well with the federal government as Utah sought statehood.

"When the state became a state and changed from a territory, there was a concerted effort to disregard the Native American," he said.

Herridge is authoring a book on Sally Young to be released later this year. He presented a glimpse of his findings at a conference at Fort Douglas on Friday, sponsored by the Utah State Historical Society.

The Church of Jesus Christ of Latter-day Saints declined to comment on the image. Herridge's findings have been met with mixed results. Maurine Smith, the president of the Daughters of Utah Pioneers, was skeptical.

"Brigham married rather a lot of people, did you notice?" she said. "So, yeah. Of course. Why not?"