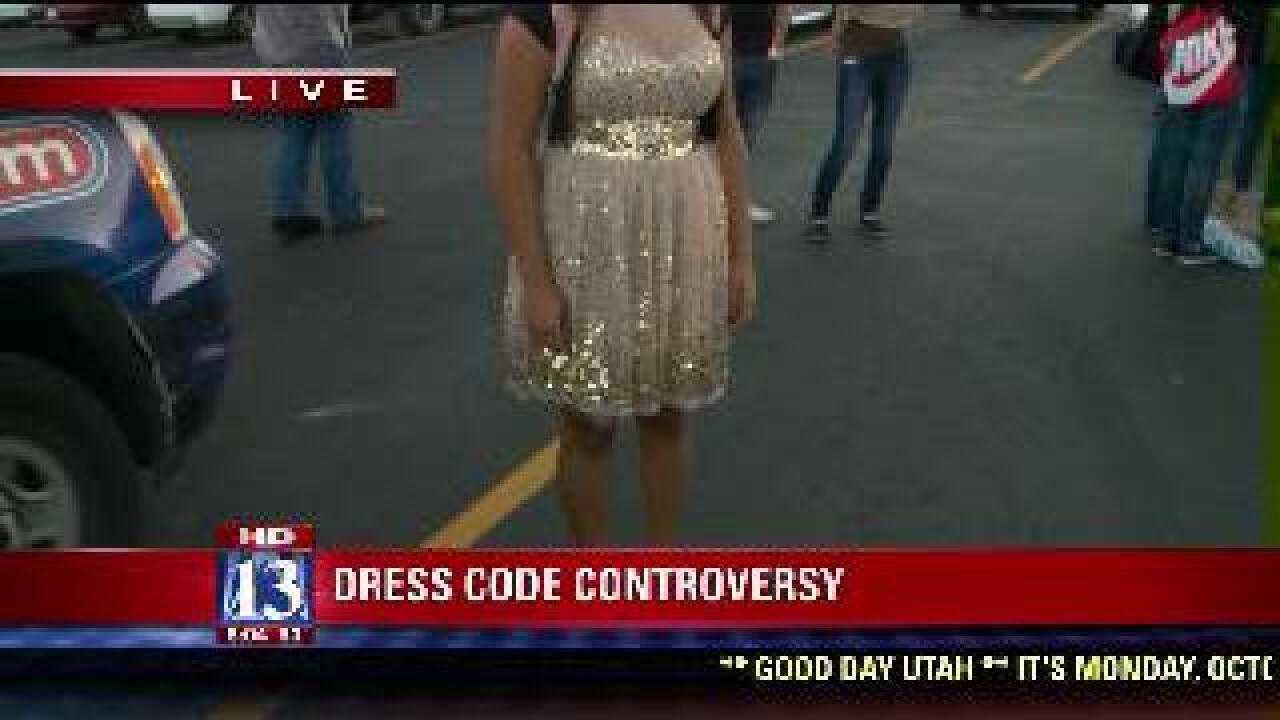 UPDATE, Oct. 1 11:20 a.m.: The administration at Stansbury High School apologized to students during an assembly Monday morning after many were turned away from the homecoming dance on Saturday because of their dress.

The school announced a free dance has also been scheduled for students. The administration said they would revise the dress code as well.

"I did give an apology. I feel like the error occurred because, with our dress standard for our formal dresses, there is some ambiguity, there is some things in question about," said Principal Kendall Topham."Specifically, there is something in there about the length of skirt that says at knee or at or near the knee. And you know, near, what does near mean? And so I apologized that that was not clarified. I also apologized that we had students and parents who had gone out and prepared for this dance and felt like, as they reviewed the policy, that they were in compliance. And then to come and be turned away, that was disheartening."

“There is going to be a new dance and it’s going to be free of charge, but, however they are going to make a new dress code,” said Bailey, a student at the school. “But everybody just went and bought their dresses and paid hundreds of dollars to get everything done, to get their hair done and everything. And now they are just going to have to go do it again and most of them are probably going to have to get a new dress.”

PREVIOUS: TOOELE, Utah - Dozens of girls at Stansbury High School say they weren't allowed to attend their Homecoming dance Saturday night because their dresses were too short.

According to Tooele School District's dress code, individual schools develop their own dress code standards. At Stansbury High School, that means dresses that are at or near knee-length.

There have been signs in the days leading up to their school Homecoming on Saturday illustrating to students what is 'acceptable,' and parents thought their daughters had purchased appropriate dresses, but the school turned those girls away at the doors to the dance.

"It's frustrating. That there's such an ambiguous rule that all of us believed we were following. And then we spent the money and time and none of the kids or parents found out until they got there," said Shelly Wolf, a parent.

Wolf says her daughter was one of dozens of girls who were told to leave the Stansbury High Homecoming Dance on Saturday because her dress was too short. Parents found themselves abruptly picking up their daughters and their dates.

A Facebook page called "Stansbury High Homecoming Spirit Massacre" was launched on Sunday night where students and parents express their concern and dismay at what they say is the school cracking down too harshly on conservative attire.

"I am a Student Body Officer at SHS and was in charge of the dance with two other girls. I think I can speak for many of us in student government in saying I'm angry that administration basically ruined our dance," posted Michelle Gubler on the Facebook page.

Photos of girls whose dresses were deemed inappropriate are also posted on the page.

Another student, Ashley Maya Farley wrote, "My dress was shorter than most on this page and they all told me I was fine. There were a lot of shorter dresses in there that had no problem. So why were we allowed in and not other people??"

Parents are also upset about what they say is a non-specific dress code. "I say we as parents make the determination of what is acceptable dress for our child when a school dress code is not specific," wrote Raini Woolley Heap on the Facebook page.

Shelly Wolf says she'd like school officials to apologize for their students being kicked out of the dance and for the rules to be more straightforward so they don't have to deal with this again.

The Facebook page has already collected hundreds of 'likes' in just a few hours as both parents and students express their frustration and anger at the situation.

Attempts to contact school or district officials on Sunday were not successful.

This is not the first time a school in Tooele has gotten attention for a questionable dress code violation. In May, a 14-year-old Tooele Junior High School student was sent home after school officials say her skirt was too short.