The shooting incident happened in June 2007. Officer Stephen Anderson escorted Curtis Allgier from the Utah State Prison to a medical clinic at University Hospital for an MRI. Allgier allegedly took hold of Anderson's gun and shot him.

Police say Allgier then carjacked a resident doctor's Ford Explorer and fled the scene. After a police chase, Allgier went to an Arby's restaurant on Redwood Road. Police fired one shot at the scene and a customer was able to disarm him. Allgier was found hiding in the manager's office of the restaurant.

Allgier is an alleged Aryan gang member and white supremacist. His body is covered in tattoos that police say showed his dedication to the Aryan Brotherhood. Allgier was serving jail time for burglary and forgery and was facing federal gun charges.

Allgier was charged with capital murder in the death and prosecutors said they would seek the death penalty. Over the next five year, Allgier changed attorneys and acted out in court, something skeptics say was just delay tactics.

In 2008, a judge decided that a letter written by Brent Cobb, who was housed in the cell next to Allgier at the Salt Lake County Jail, should be made public record.

In the letter, Cobb wrote to a third district judge asking to be moved. He said Allgier had verbally admitted to killing Anderson and was threatening to kill Cobb and his mother if he ever told anyone.

Allgier’s attorney petitioned the Utah Supreme Court in 2011 because he said Allgier’s outbursts in court may have jeopardized the judge’s ability to remain unprejudiced and unbiased. The court denied the appeal in February 2012.

The district attorney, defense and Anderson's family have met quietly over the last month discussing a possible plea deal that would take the possibility of the death penalty off the table.

"About what their needs were, what their concerns were and within that, we made the offer we did. But if it had not gone forward we would have been prepared to go forward with the requested death penalty," said Salt Lake County District Attorney Sim Gill.

The plea deal was announced Wednesday. It takes the possibility of the death penalty off the table but ensures that Allgier will spend his life behind bars without parole. Allgier pleaded guilty to five of the eight felonies, including the capital murder charge.

"The plea agreement he agreed to, he's doing it out of respect for the Anderson family and that's something he's been willing to do since June 28th, 2007," said Dusty Kawai, Allgier's defense attorney.

Allgier will be formally sentenced on Dec. 5.

The photo gallery below shows file photos of Curtis Allgeir and some of the progression of his tattoos. 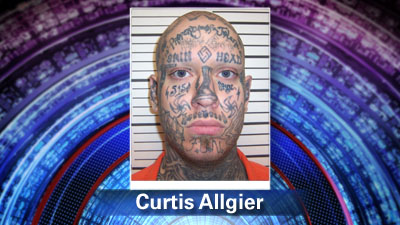