Skydiver lands safely after historic jump from edge of space 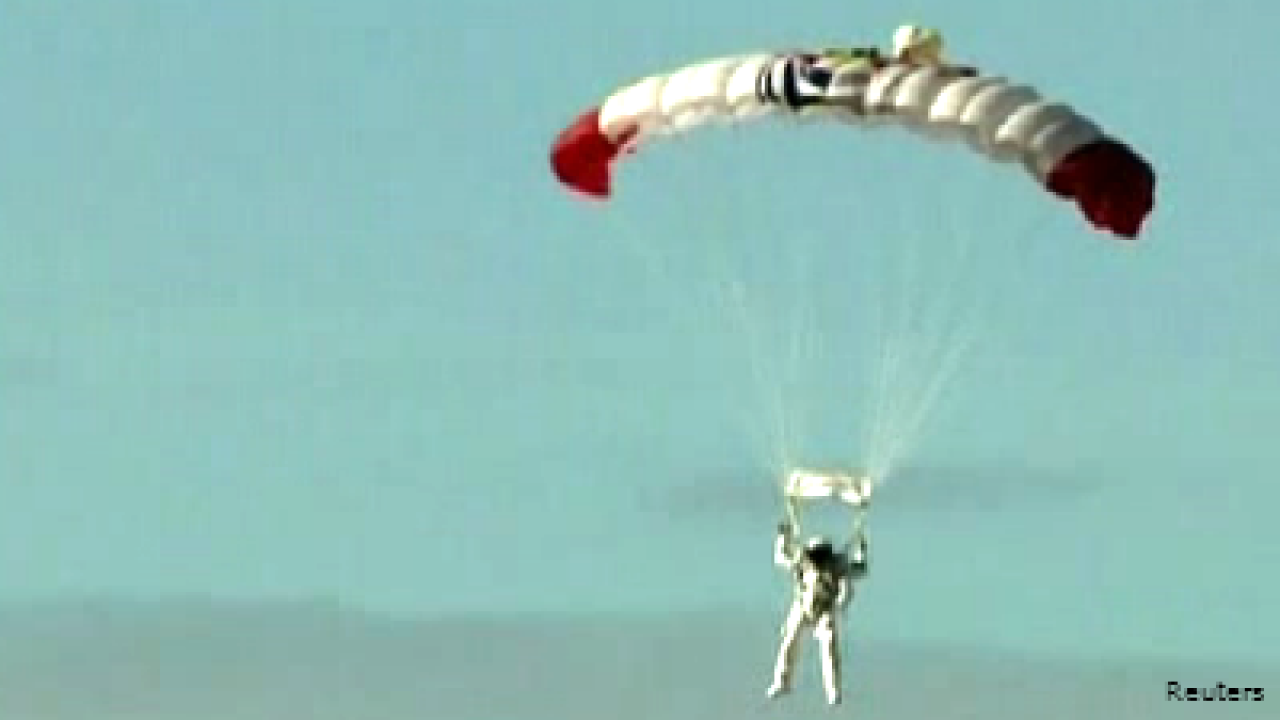 (CNN) — Skydiver Felix Baumgartner on Sunday successfully completed a record-breaking jump from the edge of space, pumping his fists in celebration as he safely hit the ground in southeastern New Mexico.

“He made it — tears of joy from Mission Control,” his support team said in a live feed.

Rising in a capsule attached to a huge helium balloon, Baumgartner got to 128,000 feet — 24 miles up — then jumped. If confirmed, it would make his feat the highest balloon ride ever, as well as the highest jump ever.

Baumgartner reached an unofficial speed of 704 miles an hour as he plunged toward the Earth with nothing but a space suit, helmet and parachute, his support team said.

He had hoped as he plunged to be the first person to break the sound barrier — which is 761 mph at sea level, but is slower as one goes higher above Earth — without the protection of a vehicle. However, his sponsor Red Bull said that it would await review and certification before saying whether he broke the speed of sound at any one point in his free-fall.

Mission Control, though, said during the jump that the skydiver did not “break the record for time elapsed” before pulling the parachute.

Dubbed “Fearless Felix,” the Austrian helicopter pilot and former soldier had parachuted from such landmarks as the Petronas Towers in Malaysia and the Christ the Redeemer statue in Rio de Janeiro.

He had been preparing for his latest feat for five years — both physically and mentally.

“You have to remember all the procedures,” he said in an interview during testing for the jump. “You know you’re in a really hostile environment. And you cannot think about anything else. You have to be focused. Otherwise, you’re gonna die.”

After a weather delay of several hours, he set off at 9:30 a.m. MT (11:30 a.m. ET) Sunday from Roswell, New Mexico, in breezy, clear conditions, strapped into a pressurized capsule that hung from a giant helium balloon. Over the next two hours, he rose into the stratosphere.

Then he ran through a 40-step checklist, opened the hatch, disconnected from the capsule, and climbed out onto a step the size of a skateboard.

“Guardian angels will take care of you,” said Mission Control just before he jumped.

After giving a salute, he jumped.

The Austrian daredevil had trained to maximize his speed by forming a crouched “delta” position, and his team on the ground watched for any signs of problematic spins or twists. Yet during his fall, Baumgartner reported only one hitch about three minutes in: “My visor is fogging up.”

After free-falling most of the way down, for a total of about four minutes and 20 seconds, he deployed a parachute for the final mile or two down to Earth.

“There’s the chute,” said a specialist in Mission Control, and the control room broke into applause.

As soon as Baumgartner landed, he dropped to his knees and raised his fists — as the team at Mission Control, in Roswell, burst into applause.

While he and his team had prepared diligently for the jump, his survival was no guarantee.

They practiced how to avoid getting trapped in a dangerous “horizontal spin.” His life also depended on the integrity of his pressure suit, since temperatures high up were expected to hit 70 degrees below zero Fahrenheit or lower, and the atmosphere was so thin that his blood would have vaporized if he wasn’t sufficiently protected.

Testing that pressurized flight suit and helmet — which restrict mobility and together weigh 100 pounds — was one goal of the mission, as it could save an astronaut’s life if a manned spacecraft malfunctioned. The outfit had sensors and recorders to measure everything from his speed to his heart rate.

Sunday’s successful jump breaks the record set in 1960 by Col. Joe Kittinger, who fell from 102,800 feet as part of a U.S. Air Force mission. More than 50 years later, Kittinger was a consultant on Baumgartner’s effort, even serving as the voice from Mission Control the skydiver heard throughout his attempt.

After a test jump this year, when the two lost communication with each other, Baumgartner told CNN he realized how much he relies on Kittinger as a mentor.

“Immediately you can feel how lonely you feel,” Baumgartner said. “I wanted to hear the voice because I am so used to this. Every time we have been practicing on the ground, Joe was talking to me. So I am used to the voice, and (it) makes me feel safe.”