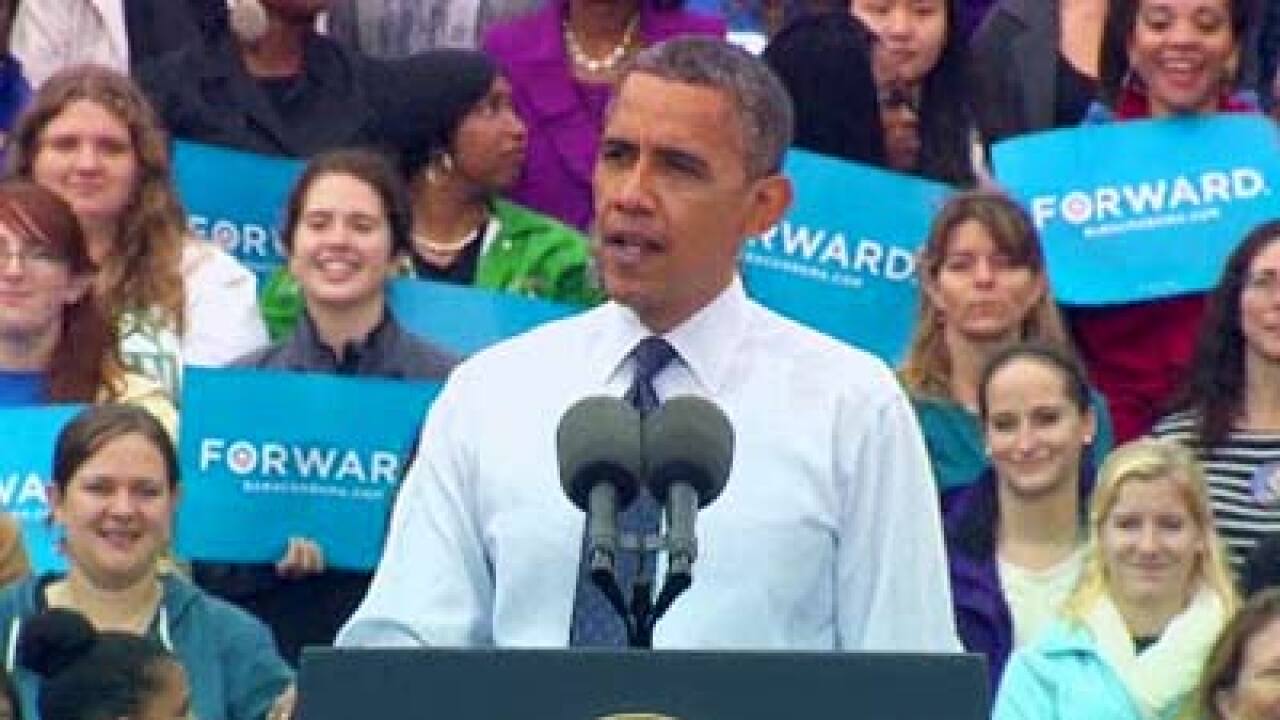 (CNN) — After an evening of light-hearted jabs, President Barack Obama returned to his cutting criticism of rival Mitt Romney Friday, accusing the GOP nominee of forgetting the hard right positions he took during the GOP primary in order to seem more moderate.

Obama, speaking at a rally in the Northern Virginia suburb of Fairfax, told the crowd his opponent was suffering “Romnesia” after seeming to change his position on contraception, coal, equal pay, and taxes.

“He told folks he was the ideal candidate for the tea party,” Obama said of Romney’s stance during the primary season. “Now suddenly he is saying ‘what, who me?’ He is forgetting what his own positions are and he is betting that you are too. I mean he is changing up so much, back tracking and sidestepping.”

Obama said he and his supporters needed to come up with a term for “this condition he is going through,” striking upon “Romnesia.”

“That’s what it’s called,” Obama declared. “Now I’m not a medical doctor. But I do want to go over some of the symptoms with you because I want to make sure nobody else catches it.”

He continued using the neologism to slam Romney for what he said was a slippery set of positions, including on a set of issues important to women.

Romney has yet to clearly state his position on the law, though an adviser said after the second presidential debate that Romney would not seek to repeal it as president.

Obama continued Friday, “If you say women should have access to contraceptive care, but you support legislation that would let employers deny contraceptive care, you might have a case of Romnesia. If you say you will protect a women’s right to choose but you stand up in a primary debate and say you’d be delighted to sign a law outlawing that right to choose in all cases, then you have definitely got Romnesia.”

Romney, who says he does not oppose contraception use in women, did voice opposition to a provision included in Obama’s health care law that required employers – including Catholic colleges and hospitals – to provide contraception coverage in their insurance plans.

The Obama administration announced in February what it called a compromise to that rule in which free contraception coverage still must be offered to employees of religiously affiliated colleges and hospitals, but health insurers — rather than the employers — would have to cover the cost.

Romney promises on the campaign trail to repeal Obama’s health law, including the contraception provision.

Romney’s campaign recently battled back accusations the candidate is moderating his stance on reproductive rights after he said in an interview he wouldn’t pursue any new abortion legislation. He later said he would seek to remove federal funding from Planned Parenthood and appoint Supreme Court justices that would support revisiting and overturning Roe v. Wade, the 1973 U.S. Supreme Court decision affirming a woman’s right to have an abortion.

Barbara Comstock, a Virginia delegate and Romney campaign surrogate, said Obama was using his attacks on the former Massachusetts governor to mask a failed jobs record.

“When you don’t have a plan to run on, you stoop to scare tactics,” Comstock said.