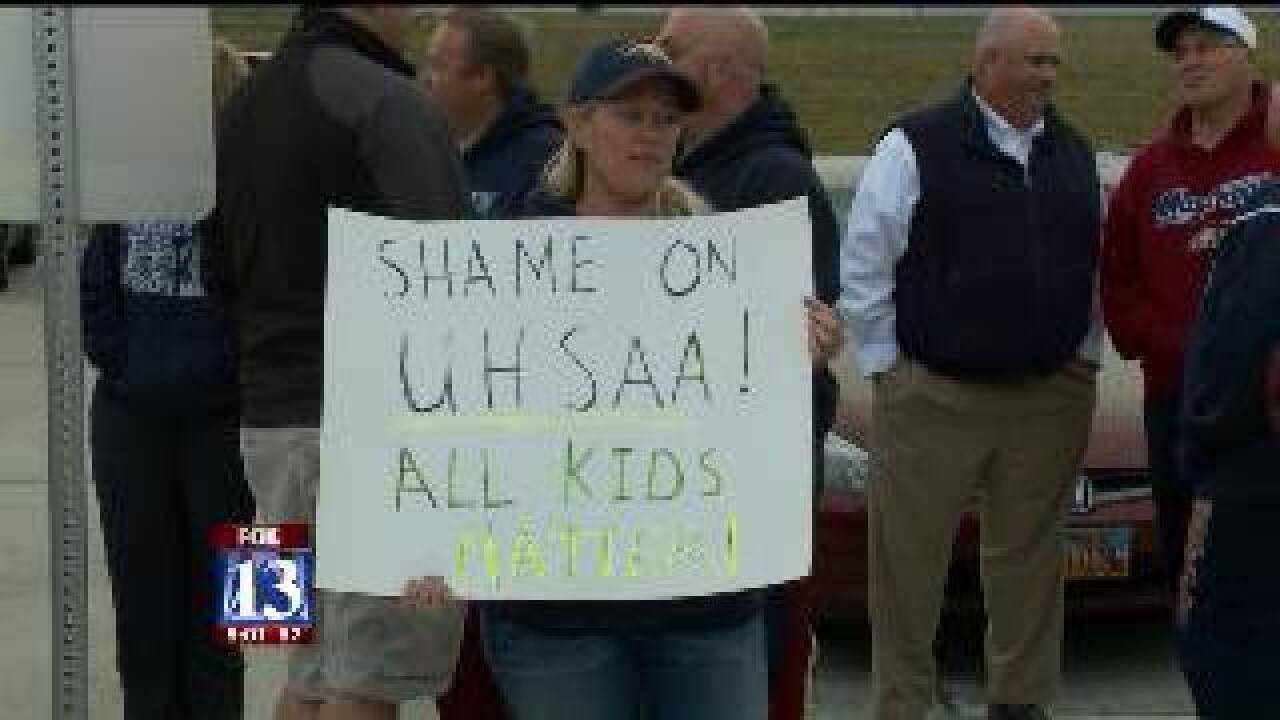 HERRIMAN, Utah - Football players, coaches and community members from six Utah high schools gathered in Herriman to speak out against a decision made last week that impacted the state's high school football playoffs.

East High had been sanctioned for having ineligible players and was forced to forfeit seven wins this season, knocking them out of the playoffs.

But the Utah High School Activities Association overturned those sanctions Friday morning, which means East High will get to participate. They now have enough wins to place them in fourth place in Region 6.

Timpview High School had a similar sanction for an ineligible player on their team, but that sanction was upheld despite an appeal to the UHSAA.

Several dozen people from schools as far away as Logan gathered in Herriman as a show of protest against the UHSAA decision. Coaches say the different treatment of the two schools is having a ripple effect on numerous Utah schools.

"The following day the board of trustees basically overturned the East decision. They kept the forfeits in place on a game-for-game basis with Timpview and chose not to do that with East so we feel it was very arbitrary, we feel it was inequitable," said Larry Wilson, Herriman High School football coach.

“The issue is that there’s an appearance that there’s been a double standard applied to the same rule being broken judged by the same board of trustees ending in a different result for both guilty parties," said Mike Favero, Logan High School football coach.

Schools that were seeded in the playoffs were moved and some feel it's as if their team's performance wasn't considered.

“It’s almost like - and I've said this to many people - that they considered the 120 East football players and what it meant to them to be in the playoffs but they didn't consider anyone else," said James Birch, Herriman High School principal.

Coaches say the format for the playoffs is now in disarray as four of the five top teams in the state now play in the first round.

“I think the UHSAA has made some arbitrary decisions and rulings and moving forward will be a mess," said Cary Whittingham, Timpview High School.

A statement was released by Herriman High School decrying what they call an "arbitrary, capricious and utterly indefensible decision.

"The statement says that while the UHSAA considered the impact on East High football players, they did not consider the impact that East High's participation in the playoffs has on other 4A schools.

"They ignored the impact on the kids at Salem Hills and Springville, who earned a right to compete for the fifth place playoff slot on the field, only to be told that due to a Timpview forfeit they no longer get that chance.

"They ignored the impact on the kids at Cyprus, who receive the message that East must forfeit its region wins against other schools, but not the one against you, so they can stay in the playoffs and you stay out.

"They ignored the impact on the kids at Mountain View, who are supposed to play a true 4th seed giving them a fighting chance at the last spot in the field of 16. Who, instead, must play the best team in the state, and if they pull off the miracle, must then face another number 1 seed as their reward.

"Finally, they ignored the impact on every kid in this state who plays sports to whom they owed the fiduciary duty to carry out their responsibilities under rules applied in a just, consistent, and predictable manner."

In the statement, Herriman High asks that the decision be overruled and that Timpview and East be treated with the same application of the rules.

The school proposes either both teams forfeit their games, which would keep East High out of the playoffs, or have both teams keep their wins and put them in the playoffs in their original place.

"One of these two results and not some arbitrary, unequal, and indefensible hybrid, is the only way to maintain the integrity of the 2012 4A Football playoffs.  Any other result is a travesty that cannot go unchallenged by those seeking to maintain their own integrity."

Coaches are hoping to talk to the five members of the UHSAA board of trustees who made the previous decision on Monday. They hope that the structure of the playoffs can be corrected in some way and that standards will be set to prevention this from happening again.

A spokeswoman for the Jordan School District said they are not taking sides in the dispute.