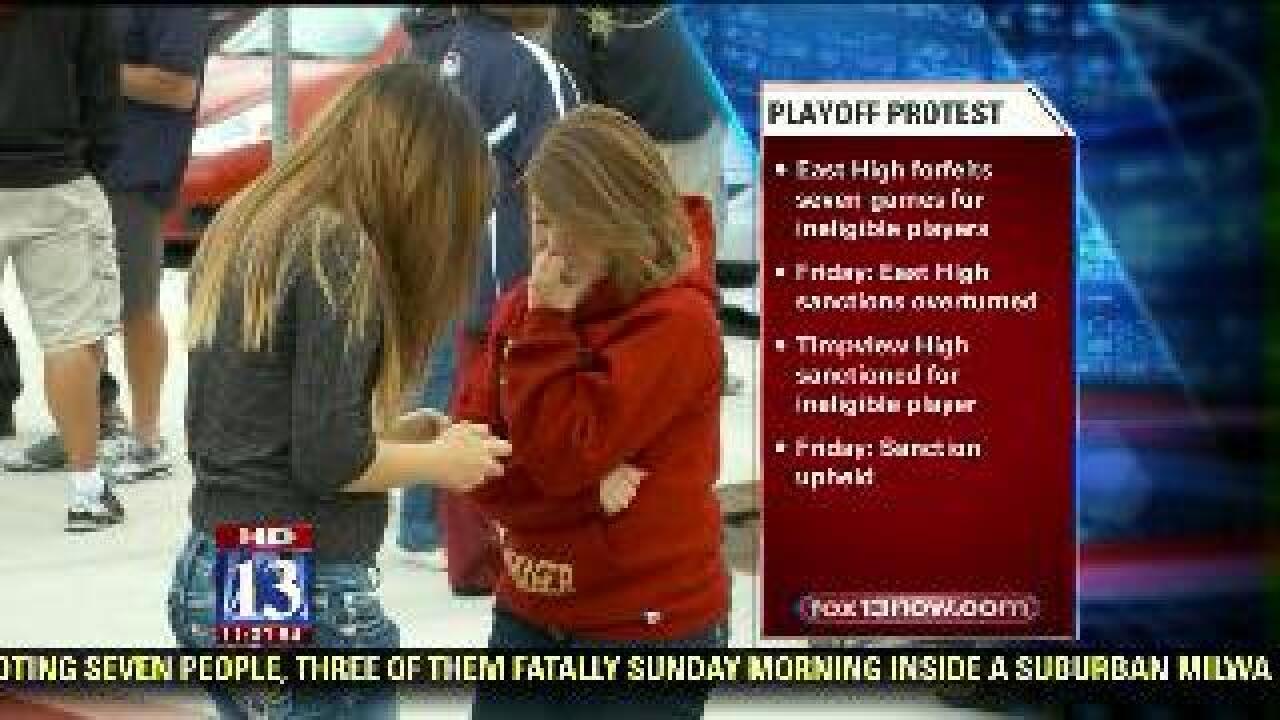 The High School Football Playoffs won't be delayed after all and the Utah High School Activities Association says it stands by its decision to allow East High to play as the 4th seed despite being busted for having ineligible players on the team.

Several schools are still crying foul, and a meeting with the UHSAA became heated this afternoon. Herriman High is upset its players will compete against East High in the first game of the playoffs. Cyprus High won't be in the playoffs at all. The decision to keep East High in the running has not only ruffled feathers, but set a precedent.

"There are a lot people who want what you want, said Mark Van Wagoner, an Attorney for UHSAA during a meeting Monday. Cyprus High School's head coach Scott Wooldridge asks in return, "What you're getting is you've put them in 4th place; is it a magic pen we put you in 4th place and the only one you have is Cyprus?" Van Wagoner says, "Yes."

Coach Wooldridge calls the board's decision to keep East High in the playoffs unfair. "If you're going to make Timpview forfeit all three why does east have to forfeit all theirs?" he asks.

The controversy began last week when Timpview came forward, admitting one of its players was ineligible. Someone then turned in East High for having several ineligible players on its team. The Athletics Director resigned as a result.

The UHSAA originally decided to cut them from the playoffs, but the board changed its mind Friday and reseeded them. East High went from 1st seed to 4th as part of its punishment.

"The problem with the decision isn't that there's no rationale for it," said someone in the meeting. The decision was ultimately met by protest from principals and parents. Some even suggested delaying the playoffs.

"If they want to amend their judgement in such a way that it would require a delay I guess there would be a delay but that's a logistical nightmare, said Van Wagoner. The UHSAA avoided the nightmare but admit, "This was a no-win situation from the beginning," said Rob Cuff, the Executive Director of UHSAA.

There are two reasons why it's a no-win. First? The schools violated the rules, knowingly or not. The board however was able to make the decision it did and then reverse it all because of the the word may. In section 6 under penalties in the UHSAA's handbook the rule partly reads, "In cases of the use of an ineligible player, the non-complying school may forfeit any contest."

"If the rules had been different we wouldn't have this issue we wouldn't be sitting in this room right now," says Wooldridge. UHSAA's Attorney agrees.

"If the rule had said that if one uses an ineligible in any contest you shall forfeit that game then they would not have the power to wave it but it say they may forfeit," said Van Wagoner.

The board is now considering changes to the rule, possibly striking the word may and replacing it with shall so this debacle doesn't happen again. Those changes most likely won't go into effect until next fall.

Tuesday afternoon at 4, East High will take on Mountain View High's football team at its play-in game. It's the game before the playoffs, and the game East High has to win in order to continue to the playoffs. The first game in the playoffs is Saturday, presumably between East High and Herriman High.