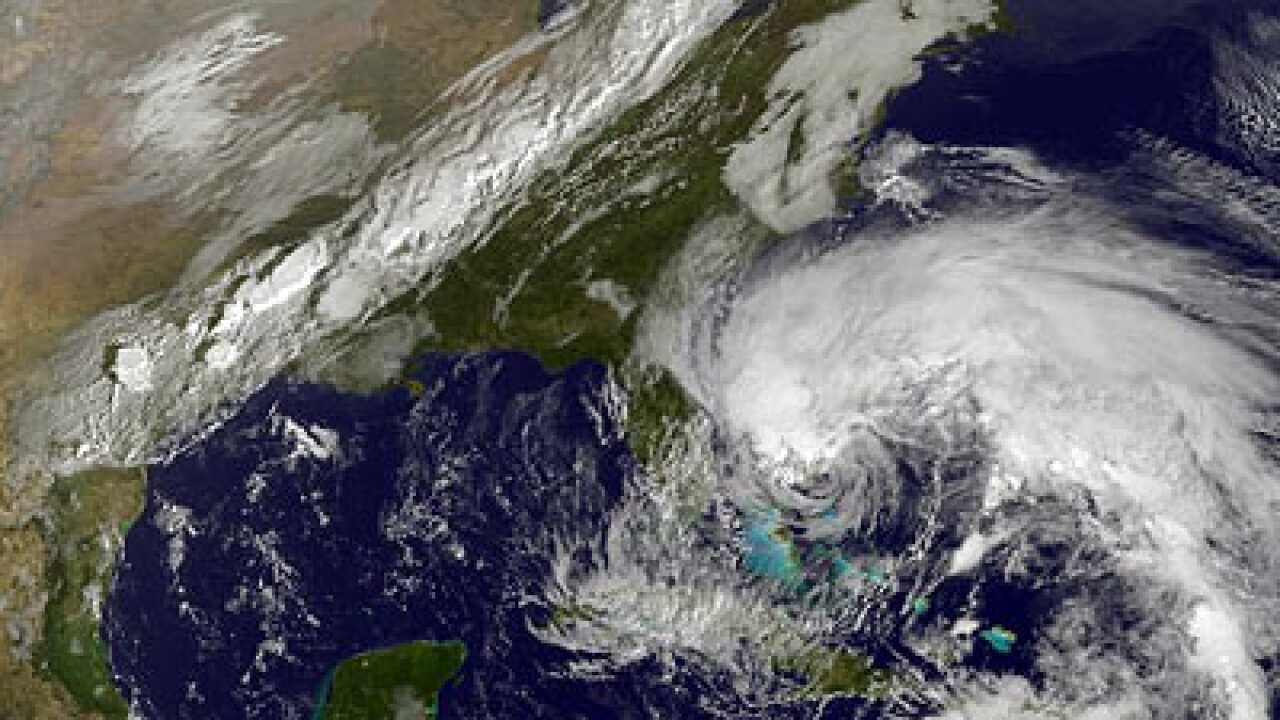 By Mariano Castillo and Ben Brumfield

(CNN) — No one hopes Hurricane Sandy lives up to its potential.

The storm that has already claimed nearly two dozen lives in the Caribbean churned Friday near northern Bahamas, and meteorologists warn that it packs the potential to slam the Northeastern United States as soon as Monday with powerful winds, pelting rain and cold temperatures.

Worst case, Sandy could merge with a strong cold front from the west. The double threat could morph into a “superstorm” that could sit over New England for days, making untold trouble for millions of residents. Weather experts said it’s a recipe not unlike 1991’s “Perfect Storm.”

At 11 a.m. ET Friday, forecasters said Sandy is losing shape and is a Category 1 hurricane with winds of 80 mph. But it’s not to be taken lightly.

“Forget about the category with this,” said CNN meteorologist Rob Marciano. “When you have trees with leaves on them still, this kind of wind and rain on top of that, you’re talking about trees that are going to come down, power lines are going to be out and the coastal flooding situation is going to be huge.”

Sandy’s death toll in Haiti, Jamaica and Cuba this week was 21 people.

The U.S. target area is hard to predict at this point. Some landfall computer models show the storm striking somewhere between Washington and Boston — some of the most densely populated areas of the country. U.S. residents in those areas, forecasters said, should prepare for the possibility of several days without power. “There is potential for widespread power outages, not just for a couple of days but for a couple of weeks or more, if the storm stays on track,” said meteorologist Kathy Orr of CNN affiliate KYW-TV in Philadelphia.

Sandy could be a storm “of historic proportion,” she warns, and the City of Brotherly Love could take a direct hit.

“This could be like the ‘Perfect Storm’ 21 years ago,” said CNN meteorologist Chad Meyers.

A combination of three weather systems produced the famed “Perfect Storm” in the north Atlantic over Halloween 1991 when moisture flung north by Hurricane Grace combined with a high pressure system and a cold front, according to the weather service.

The current weather conditions are not exactly the same as what produced the 1991 tempest. Although Grace contributed significantly to the storm, it did not progress to New England and did not make landfall, weather records show.

On Friday, residents in South Jersey were already stocking up on batteries and bottled water, and hardware stores have put up preparedness displays, KYW reported. One location quickly sold out of electric generators.

“This is the worst timing for a storm,” Newark Mayor Cory Booker told CNN’s Soledad O’Brien. “You have fall ending, a lot of loose branches.

“The storm itself will be bad, but I worry about the aftermath, people being caught without power.”

Along the Jersey shore, storm preparations included bulldozers shoring up piers with mounds of sand. Worried residents filled sandbags in case of flooding.

“We will be piling up as much sand as possible along the beachfront,” said Frank Ricciotti, Margate, New Jersey, public works director. “I think the water damage is worse than another type of damage, and the hardest thing is to stop water, once it starts coming up.”

With a national election already under way in many early voting states, Sandy’s wrath also could have a ripple effect on politics.

Bad weather in Maryland or Washington could make it harder for people to get out and cast their ballots at early voting locations. Early voting kicked off Monday in Washington and will start Saturday in Maryland.

“From Sunday through Wednesday, winds of hurricane force are expected to lash exposed areas of the Northeast/Mid-Atlantic states, leading to potentially serious coastal erosion and coastal flooding,” the National Hurricane Center reported.

The weather service also warns “the buildup of tides over multiple tidal cycles should exacerbate the situation.”