(CNN) — They’ve lost their homes, their businesses and many are still stranded — but residents in the battered Northeast are overcoming the after effects of Superstorm Sandy with a gritty resolve.

“It’s sort of like the transit strike a few years ago,” said Elizabeth Gorman, 40, a Queens resident, who walked across the Queensboro Bridge on Wednesday. 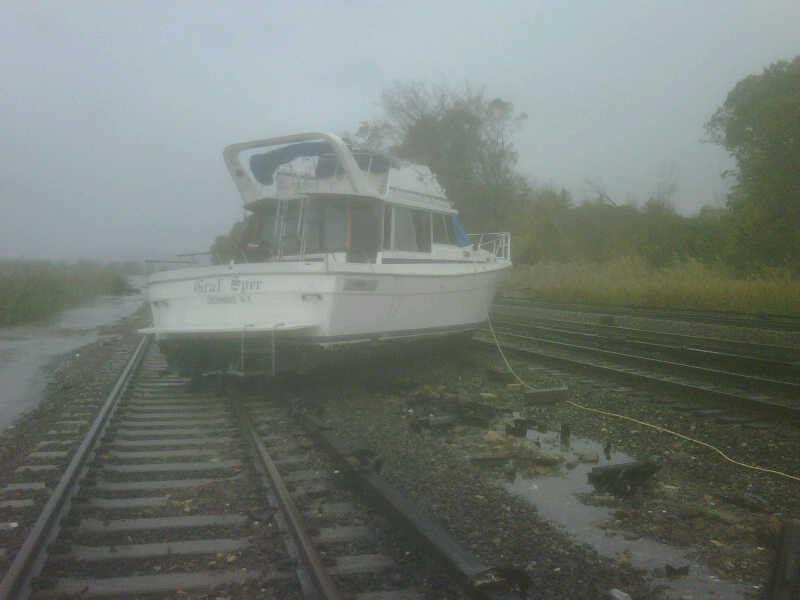 Gorman was part of a steady stream of commuters forced to walk or bike into New York City after Sandy roared ashore barely two days ago, wiping out roads, bridges and mass transit systems across the region.

Commuters, homeowners and businesses struggled with the loss of power, and waterlogged or burned homes.

But many residents along America’s most populous urban stretch greeted the major losses and daily inconveniences with determination.

In Seaside Heights, New Jersey, Mayor Bill Akers said his hard-hit town will tough it out.

“We’re going to just do the best we can and give the support,” he said. “When it’s tougher, we’re the best community.”

Over its entire path, the storm killed 122 people — 67 in the Caribbean, 54 in the United States and one in Canada. Nearly half of the U.S. deaths have been reported in the state of New York.

Wednesday, the storm sputtered over the Great Lakes region, where its strong winds were expected to trigger some coastal flooding as well as additional snowfall in portions of West Virginia, Maryland and Pennsylvania.

Nearly 6 million customers across the Eastern United States were still in the dark Wednesday, down from the nearly 8 million who lost power shortly after the storm hit.

Others remain stranded by flooding, particularly along the Jersey Shore, where police were conducting house-to-house rescues.

President Barack Obama arrived in the Garden State to see first-hand the damage that Sandy inflicted on the Jersey Shore, described by Gov. Chris Christie as “unthinkable.”

In Seaside Heights, Akers said crews are trying to get each and every person to shelters from his battered community, which he called the storm’s “ground zero.”

Speaking to CNN, Akers’ voice cracked a bit as he described the enormity of the destruction and the resolve to rebuild.

“I just want to try to keep the emotion out of it,” he said. “For everybody, it’s — this is a loss for everybody … not just Seaside Heights.

“If there’s any good news,” he added, “the water (has) receded, the roadways are accessible. But we still have downed power lines. We are not letting anybody in at that particular time.”

Most of the town’s few thousand residents have no access to power, Akers said, and crews from across New Jersey and out of state were arriving to help. Many people lost their homes and the town’s piers floated away in the ocean.

For now, the mayor said, he and other officials are taking “baby steps” in tackling the devastation. He’s hoping for help from utility workers, the National Guard and the government.

“It’s a long process,” Akers said. “I really don’t have a timetable yet.”

Akers said eventually, when residents come back, they’ll have to deal with their emotions and “face what we’re facing right now.”

Farther north, the National Guard arrived in Hoboken, New Jersey, near New York City, to help the city, where thousands are reportedly trapped.

Other military branches have also been deployed to help in the storm’s aftermath.

The U.S. Coast Guard sent airboats normally used for ice rescues in the Great Lakes area to the East Coast to assist in shallow water rescues. The U.S. Navy is moving three amphibious landing ships toward the coastlines of New York and New Jersey in case there is a request for their assistance.

As for mass transit, both New York and New Jersey were working to get their transportation systems back in order.

New York buses were operating at full service Wednesday and there was limited commuter service on trains, Gov. Andrew Cuomo announced. There will be limited NYC subway service supplemented by bus service from Brooklyn to Manhattan, starting Thursday.

The Port Authority of New York and New Jersey said it was waiting for electrical power to be restored to begin pumping out the Holland Tunnel. Three of seven East River tunnels have been pumped and are free of water.

Con Edison and other utility crews worked to restore power.

As New Yorkers worked and cycled into Manhattan, the financial markets reopened following a two-day closure due to the storm. New York Mayor Michael Bloomberg rang the opening bell for the New York Stock Exchange.

“I’ve taken this action to minimize additional risks to lives and the public safety as we begin the process of rebuilding and recovering from Hurricane Sandy,” Gov. Christie said.