RIVERTON, Utah - When they heard the story of a baby eagle who miraculously survived this summer's Dump Fire, third grade students at Riverton Elementary decided to do their part to help out.

The Dump Fire scorched more than 5,500 acres of Eagle Mountain of Saratoga Springs in June and forced thousands of evacuations. After the fire was out, rescuers found a baby eagle - now named Phoenix - who'd been badly burned but miraculously survived the fire.

"Phoenix was named Phoenix because he literally rose up out of the ashes," said Buz Marthaler with the Wildlife Rehabilitation Center of Northern Utah. "There was very little reason other than it being a miracle that he even survived."

Phoenix was between 75 and 80 days old when the Dump Fire destroyed his nest. His feathers were singed, he was severely underweight and dehydrated, his feet had third-degree burns, his beak nearly melted away. He was taken to the Wildlife Rehabilitation Center of Northern Utah to help him recover.

"I was sharing the story with my students and the remarkable tale of that Phoenix bird," Fay said. "The kids asked if there was a way they can help."

The class contacted the Wildlife Rehabilitation Center and started on three service projects. They made a scrapbook of Phoenix's survival and journey to recovery, bird perches and a donation drive.

To thank the kids for their help, the Wildlife Rehab Center paid a surprise visit to their classroom on Monday. 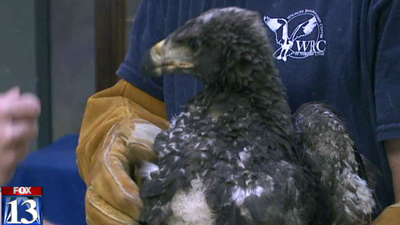