WEST VALLEY CITY, Utah -- Fire crews are investigating the cause of a fire that engulfed at least ten cars at a West Valley City apartment complex Tuesday.

The fire broke out in the car port just after midnight near 3700 South 2200 West.

Investigators said a situation like this is unusual and arson is a possibility. Tuesday morning, investigators brought arson dogs to the scene and said the dogs hit on several spots while going through the debris.

Investigators will test the debris. They are also speaking with the owners of the cars that burned for additional clues to what may have started the fire. 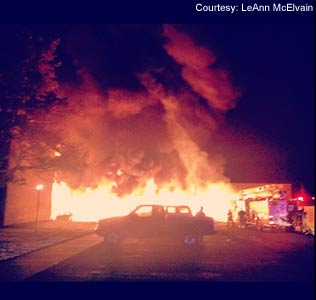 When fire crews arrived on the scene, several cars were already in flames. Firefighters rushed to evacuate people living in the apartment complex. Although the building was not on fire, there was a risk of explosions and toxic fumes.

"We didn't want to put people in harms way with that smoke, because when a car burns it's got plastics, it's got just about everything that's nasty when it burns and so we just want to make sure everybody's safe that way," said Bob Fitzgerald, West Valley City Fire Marshal. "It's one of those fires we're going to have to take a very close look at, and see exactly what happened here."

Residents were allowed back into their homes after about an hour.

The fire marshal said the quick work of the firefighters kept this fire from spreading to homes or a nearby school. No on was hurt.

Resident Sandra Young said she was less upset that her car was burned and was more bothered by the possibility that someone did this on purpose.

"Well especially if they are talking arson, how can they affect other people, hurt somebody else?" Young said.

Fitzgerald said the damages are estimated to be over $100,000.