PRICE, Carbon County, Utah – Police say an autistic boy's puppy that went missing at the Salt Lake Gun Show in Sandy over the weekend has been found.

Amanda Godin says they'd gotten three Chihuahua-Dachshund puppies a couple months ago because they were told a pet could help with their 5-year-old autistic son Aiden’s development.

"He brushes their teeth, he puts their collars on. He plays with them, he pets them," say Godin. "It helps him learn that this is something that he has to do in everyday life, as well."

While their family was browsing at the Salt Lake Gun Show on Saturday, Godin says a woman approached them, interested in Aiden’s 10-week-old dog.

"The lady just asked if she could touch him," says Godin. "And she grabbed him and ran before I even realized, at first I thought it was a joke."

The woman disappeared into the crowded expo center. Godin says she tried to run after the woman, but there were too many people.

"I kept hitting people and running people over. I’m surprised I didn’t get hit," says Godin. "But I couldn’t catch up with her."

The family filed a police report and offered a reward for the return of the dog.

Police say the couple told them they found the dog running in the parking lot south of the South Town Expo Center on Saturday afternoon and took him home. They say the dog had no tags on him when they found him.

"They were at the gun show Saturday, found the dog walking through the parking lot and out towards State Street. Little puppy. So they picked it up and said they asked around, talked to security and no one had indicated to them it was a lost dog," Arnold said.

On Monday, the couple took the dog to a veterinarian and had it checked out.

After seeing the story on FOX 13, neighbors reportedly told the couple that they had the stolen dog.

The veterinarian also saw the story and worked with police to get the couple's names, but the couple returned the dog before police contacted them.

Aiden and his family were reunited with the puppy on Wednesday afternoon.

"For everybody that looked for him and passed on the word and passed his picture, thank you. From the bottoms of our heart, thank you for everything that you did. Cause none of those people know us and they didn't owe us anything. They just did it because they are good people," Godin said Wednesday. 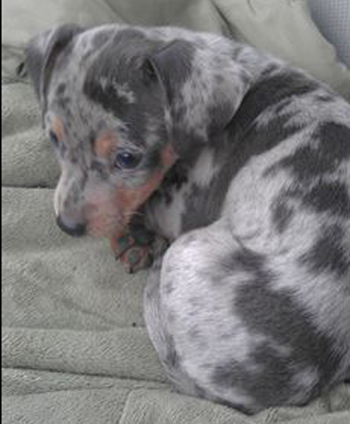