SALT LAKE CITY -- South Salt Lake police are searching for a woman they said robbed a gas station at gunpoint Friday night, and the suspect may be the same woman sought by Salt Lake City police in connection with a similar crime.

South Salt Lake police said a woman entered the Texaco gas station, located at 315 East and 3900 South, at about 6:30 p.m. Friday and pointed a handgun at the clerk.

"So I greet her and she just showed me the gun and said, 'Open the till and give me all your money,'" said Tanya, the store's clerk.

The suspect demanded cigarettes and cash, and the clerk complied. Witnesses say the suspect then left the store to a waiting car with a driver and sped away.

Gary Keller, South Salt Lake Police Department, said they are still trying to determine if the two robberies were committed by the same suspect.

“That's going to take some time for our detectives to sort through it, compare notes with their detectives, and see if maybe we have the same person going around the area doing robberies,” he said.

Anyone with information regarding the suspect or the robberies is encouraged to call police at 801-799-3000. 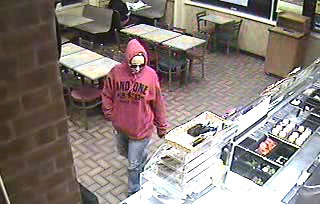