MANTI, Utah -- The "Mountain Man" burglar, who evaded authorities for more than five years and is wanted in dozens of cabin break-ins across central and southern Utah, has been arrested, police announced.

Troy James Knapp, 45, was apprehended Tuesday morning after police tracked his location to a cabin along the Sanpete-Emery County line. He allegedly shot at a police helicopter before being surrounded by officers and surrendering.

"All of us are safer because he's in custody at this point," Sanpete County Sheriff Brian Nielson told reporters on Tuesday.

Police got a tip from a group of antler hunters who encountered him last week. Nielson said deputies tracked snowshoe prints to the cabin where he had been staying the past two days. The area where Knapp was staying, near Ferron, is still under about 4-feet of snow.

More than 40 officers from agencies across Utah where there in the effort to arrest him, using snow machines to get to the scene.

A helicopter from the Utah Department of Public Safety hovered over the cabin and police said Knapp came out shooting.

Sevier County Sheriff Nate Curtis said Knapp pointed an SKS rifle at the Emery County Sheriff, who fired off a shot at him. Knapp then tried to run.

"He was severely outgunned at the time. He ran into a number of officers that were also well armed and he could see he was out of his league and did surrender," Nielson told reporters.

Knapp was "very cooperative" with investigators, Sheriff Curtis said in an interview with FOX 13. They found maps in his backpack marked with all of the places he had allegedly burgled.

"He was telling us about how many he thought we knew about, but he said there was way more than that," Curtis said.

Knapp has allegedly been raiding back-country cabins in several counties across central and southern Utah for nearly seven years. He faces formal charges in three counties and is being investigated by several other sheriff’s departments.

Curtis said Knapp expressed some relief at being captured, saying he was sick of the winters. The "Mountain Man" ate pizza and revealed to investigators why he chose to live alone in the mountains.

"He didn't like being out and being with other people. He felt he'd had enough life experiences that he didn't want to be living out on the street or living at home anymore. He wanted to go somewhere where he didn't have to deal with society," Curtis told FOX 13.

Knapp is accused of stealing guns and provisions from cabins. He also vandalized some, police have said. Sheriff Curtis told FOX 13 that Knapp said he targeted some cabins as a "statement against excess."

"He justified it by saying they had too much. I need it, so I'm going to take it," Curtis said.

Knapp told investigators he particularly disliked ATVs. He traveled across much of the state using snowshoes. When he wasn't breaking into a cabin to sleep, police found hovels constructed of branches and woodland debris scattered all over the state.

Ron Bartholomew was glad to see police apprehend Knapp. He recognized his jacket on the suspect in photos broadcast on TV. It was his cabin, authorities said, that Knapp had been staying at when he was arrested.

"It's scary because, you know, my mom and sisters and grandkids and that spend a lot of time up there in the summer and the fall," Bartholomew said. "That's probably the scary part about it. I'm not scared of him."

Knapp declined to comment to FOX 13 as he was being booked into the Sanpete County Jail on Tuesday night.

Knapp is facing charges related to cabin burglaries in Iron, Garfield and Sevier County. Sanpete County Attorney Brody Keisel said Knapp would likely face charges for firing at officers during Tuesday's arrest. He is expected in court next week.

See below for some photos from Knapp's capture, courtesy of the Emery County Sheriff's Office: 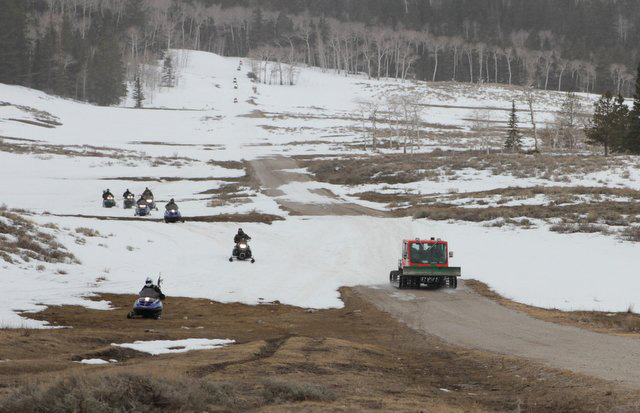