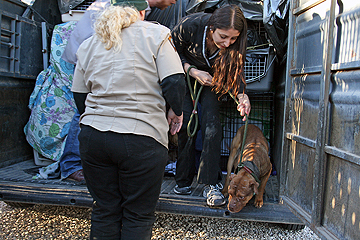 HOLBROOK, Idaho – Sixty-three dogs are now recovering in Boise after a triple homicide in Holbrook last week led to the discovery of a dog fighting ring.

Three adults, Trent Jon Christensen, 32, Yavette Chivon Carter, 27, and Brent L. Christensen, 61, were found shot to death inside a home off Highway 38 in Oneida County, Idaho, on Friday. There were two children found inside the home, alive and unharmed.

A search of the home also found 63 pit bull dogs and puppies. Oneida County Sheriff Jeff Semrad said the animals were either being sold or raised to fight in a ring found outside the home.

The Oneida County sheriff told Local News 8 in Idaho that the dogs likely fed on other dogs.

“Occasionally they will grind up the meat of a dog that dies and feed to the other dogs,” Semrad told Local News 8. “We found a dead dog in the freezer and a grinder nearby.”

The dogs were removed from the home on Monday and are now recovering at the Idaho Humane Society facility in Boise.

According to a press release from the Idaho Humane Society, the dogs were found to be in “very poor body condition.” They say most of the dogs are underweight and suffering from malnutrition.

Many of the dogs had open wounds and extensive scarring from old wounds, and skin, eye and ear ailments resulting from neglect, IHS says. Some have old injuries of broken bones that were left untreated.

Despite their poor physical health, IHS says most of the dogs appear to be friendly and accepting of handling by people.