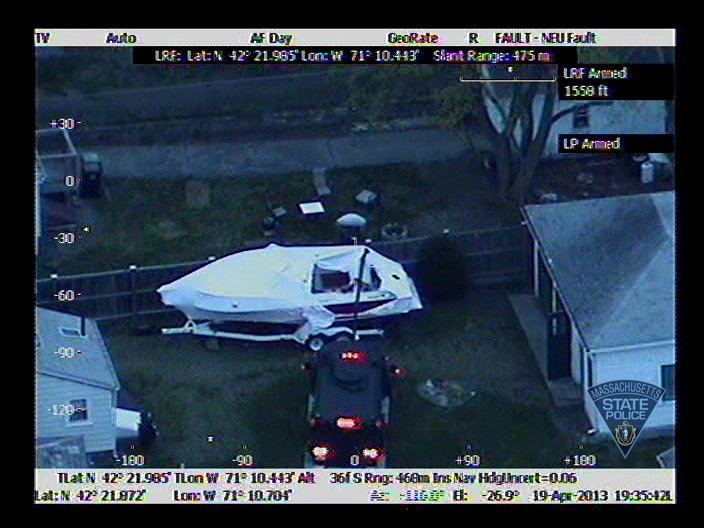 (CNN) — It was a boat owner’s obsession with perfection, making sure his “baby” was stowed just right in his backyard, that led him to discover the surviving suspect in the Boston Marathon bombings.

Contrary to police reports, David Henneberry said the discovery of blood had nothing to do with the inspection of his boat, the Slip Away II, he told CNN affiliate WCVB. During the inspection, he found a bloodied Dzhokhar Tsarnaev, 19, hiding in the boat, he said.

Henneberry said he had been obsessing over how two pads had fallen out of the shrink-wrap protecting his boat for the winter. He had put the pads under the shrink-wrap to prevent chafing, he told the station. It took two visits tending to the boat before he finally saw Tsarnaev and his trail of blood.

“It was really windy, so I didn’t think twice about it,” he said of the dislodged pads.

He couldn’t address the problem until authorities lifted a “shelter-in-place” order for residents of Watertown, Massachusetts, about 6 p.m. Friday.

Then he went outside to get some air, he told the affiliate.

“I am just going to put the pads back. They were bugging me all day. So I went out in the yard and felt the freedom that everyone in Watertown was feeling. When I pulled the strap, it was a lot looser than it usually is. But again, the wind could have loosened things up,” he said.

At this point, he didn’t see blood on the exterior tarp, despite what police have said.

“I said ‘OK, everything is fine.’ There are no visible signs of blood outside the boat. I went inside,” he said.

But in a fit of obsession, he returned to the boat, climbed a ladder and inspected the Slip Away II again.

“I got three steps up the ladder and rolled the shrink-wrap. I didn’t expect to see anything, but I saw blood on the floor of the boat. A good amount of blood,” he told the affiliate.

“And I said ‘Wow, did I cut myself last time?’ I thought. I was in the boat a couple of weeks ago. Then I just look over there, and there is more blood,” he continued.

The blood led to a revelation that would end a two-day manhunt for Tsarnaev.

“And I looked back and forth a couple of times and my eyes went to the engine block and there was a body,” he told the station.

He didn’t immediately connect the body to Tsarnaev.

He recounted how the person was hidden.

Responding quickly, Henneberry didn’t even remember climbing down the ladder and running to the phone to dial 911.

“I didn’t waste any time. I didn’t ask him if he wanted a cup of coffee. I was off that ladder. That is all I remember,” he told the affiliate.

Police later escorted Henneberry and his wife to a neighbor’s home. Police then surrounded the Henneberry’s house. Tsarnaev eventually surrendered.

“I am lucky I am alive,” Henneberry said. “These other people were killed. Sometimes, I just sit and say, ‘Wow.'”

Many on social media want to buy him another boat.

But Henneberry wants nothing of it. He calls himself an “incidental hero.”

“Slip Away is slipping away. But I say it did its job. It held a bad guy and is going away like a viking ship.”