WACO, Texas (CNN) — A row of 12 coffins, each draped with a flag, symbolizes the human cost of an explosion that destroyed much of a small Texas town and left the residents of that town searching for answers.

Hundreds of firefighters from across the nation and other first-responders joined grieving families and President Barack Obama and the first lady at the Ferrell Center in Waco, site of a memorial service Thursday for some of the people killed in a fertilizer plant explosion last week in the nearby town of West.

The president told the crowd that no words adequately describe the courage displayed by those who died.

“What I can do is offer the love and support and prayers of the nation,” Obama said.

Obama told the families and friends of the those killed that they were not forgotten, saying “our hearts have been here in your time of tribulation.”

He promised them the nation will help them rebuild and reclaim their small community of about 3,000 people.

Before the president and first lady Michelle Obama joined the residents of West at the service at Baylor University, the president’s helicopter flew over West and circled several times over the flattened structures and scarred earth.

The Obamas met privately with the families after the service.

Texas Gov. Rick Perry promised the families of the first-responders who died that their loved ones would not be forgotten.

“First-responders know better than anyone that there’s no such thing as a routine emergency,” Perry told the crowd, “but it didn’t slow them down as they raced toward that burning factory.”

Perry urged the families to remember that “the spirit that drove those men we love — they live on” and asked the crowd to “let their deeds serve as an inspiration” to service of others.

The families of the victims recorded emotional video tributes that were played during the service. Some were somber, some were mixed with light-hearted memories. All drew tears.

“Cyrus always hated the word ‘hero,'” said Bryce Reed, whose brother was attending a EMT class when the fire that preceded the explosion began. “He and I shared the belief that heroes are persons (whose names) are etched in marble. And that a hero is a sacred and solemn term reserved for only those who paid the ultimate price when others would falter or run.

“My brother would disagree, but I firmly believe that all privy to this incident can attest that my brother and all those who lay with him are heroes now and forever.”

Earlier, as the service began, everyone in the arena stood in complete silence as family and friends of the victims filed in. Some of the family members wept as they passed the flag-draped coffins — 10 with American flags and two with Texas flags — and photos in front of each one.

Family members hugged one another when they arrived at their seats.

The service — which honored the 10 first-responders killed April 17 and two friends of first-responders who also answered the call — included roll call as the name of each victim was read, followed by one toll from a bell. An officer at the foot of each coffin saluted.

Each family was given a flag and a helmet in remembrance. A bagpiper played “Amazing Grace.”

In all, 14 people were killed by the blast, including two other people who died in their apartment nearby.

Before Thursday’s service, emotions were raw in Waco, the central Texas city about 20 miles south of the scene of the blast.

Many onlookers cried as they lined the street outside as a procession of fire trucks slowly passed. One man held a large Texas flag, bowed his head and rested a cowboy hat over his heart.

Hundreds of bikers from the Patriot Guard stood at attention as the rescue vehicles passed by.

Before leaving Washington, Obama signed a proclamation ordering all flags in the state to be flown at half-staff for the day.

City workers from Waco replaced West workers Thursday so they could attend funerals and take a break from trying to repair the city’s water system and cleaning up the town.

On Wednesday, an American flag was raised and a bugler played taps at a memorial service at the blast site. A few miles away, one of the victims, Kenneth “Luckey” Harris Jr., was laid to rest. Harris, a 52-year-old Dallas firefighter who lived in West, was one of the first-responders who died. One of the coffins at Thursday’s service represented Harris.

Hundreds of firefighters from Dallas and other areas surrounding West came for the funeral, the first to be held for the responders killed in the blast. Firefighters lined the sidewalk as Harris’ flag-draped coffin was carried out and loaded into the back of a Dallas fire truck to be carried to the cemetery. Bagpipes played as the coffin went through the crowd.

“Shovel by shovel,” investigators are combing through the charred remains of the leveled fertilizer distributor after the April 17 explosion in West.

Much of the landscape surrounding the West Fertilizer Co. is unrecognizable. What was once a corn silo appears to have crumpled from the blast. A blue tarp covers the shell of a rail car.

A crater nearly 100 feet wide and 10 feet deep sits where a building once stood. The crater is now filled with mangled metal and crumbs of mortar. Concrete chunks, some the size of shopping carts, are strewn hundreds of yards away from the blast site.

Losses from the explosion will probably top $100 million, said Mark Hanna, a spokesman for the Insurance Council of Texas.

But amid the devastation, forensic mappers are hoping to find clues.

Hundreds of small pink flags indicate anything on the ground that crews want forensic investigators to take a closer look at.

Officials face a difficult task in reconstructing the fire that preceded the deadly explosion. Still unknown: what types of chemicals and in what quantities were stored at the facility.

Putting the pieces together

One official likened the investigation to a jigsaw puzzle.

“Right now, think of that coffee table where all 100 pieces are gathered around,” Brian Hoback, an official with the Bureau of Alcohol, Tobacco, Firearms and Explosives, told the San Antonio Express-News. “Now, we’re going to pull them together.”

Robert Champion, special agent in charge of the bureau’s Dallas Field Division, said that determining what started the initial fire is key.

“We feel the explosion was caused by the fire, so we’ve got to determine what the cause and the origin of the fire was, and that’s why we’re … attempting to re-enact that fire scene,” he said. “A fire scene is complicated in itself. But you compound that with an explosion, and it really complicates the issue.”

Investigators have ruled out the possibility that natural causes ignited the fire. 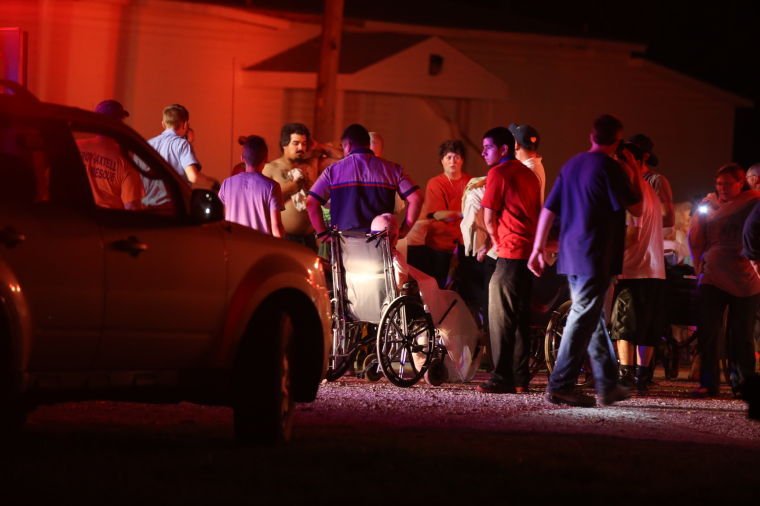