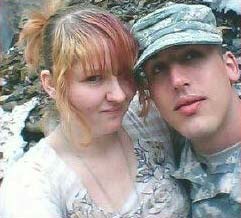 SPRINGVILLE, Utah – Police in Springville are looking for a 16-year-old girl who was last seen with a 19-year-old Texas man on April 23.

Katy Kendall left her home during the early morning hours of April 23. According to police reports, Katy left home with 19-year-old Zachary Metcalf, who is from Texas, and the pair was last seen in the Salt Lake area. Repeated attempts to reach Katy or Zachary have been unsuccessful.

Officials say Zachary is in the Army Reserve and came to Utah in either March or April. The two began seeing each other in mid-April, and that they began saying they were engaged as early as mid-March.

On April 23, Katy left her Springville home and went to a friend’s house in Provo. The next morning, Katy’s mom reported her as a runaway and notified police of Katy’s possible whereabouts.

Katy’s iPod and her family’s laptop were both pawned, most recently the laptop in Salt Lake on April 23.

Their current whereabouts are unknown.

Anyone with information is asked to contact Springville Police by phone at 801-489-9421 or by accessing the tip-a-cop form at www.springville.org.

A candlelight vigil will be held on Wednesday night at 8 p.m. at Pioneer Park in Provo to raise awareness of Katy’s disappearance.