Search for Susan Cox Powell along I-84 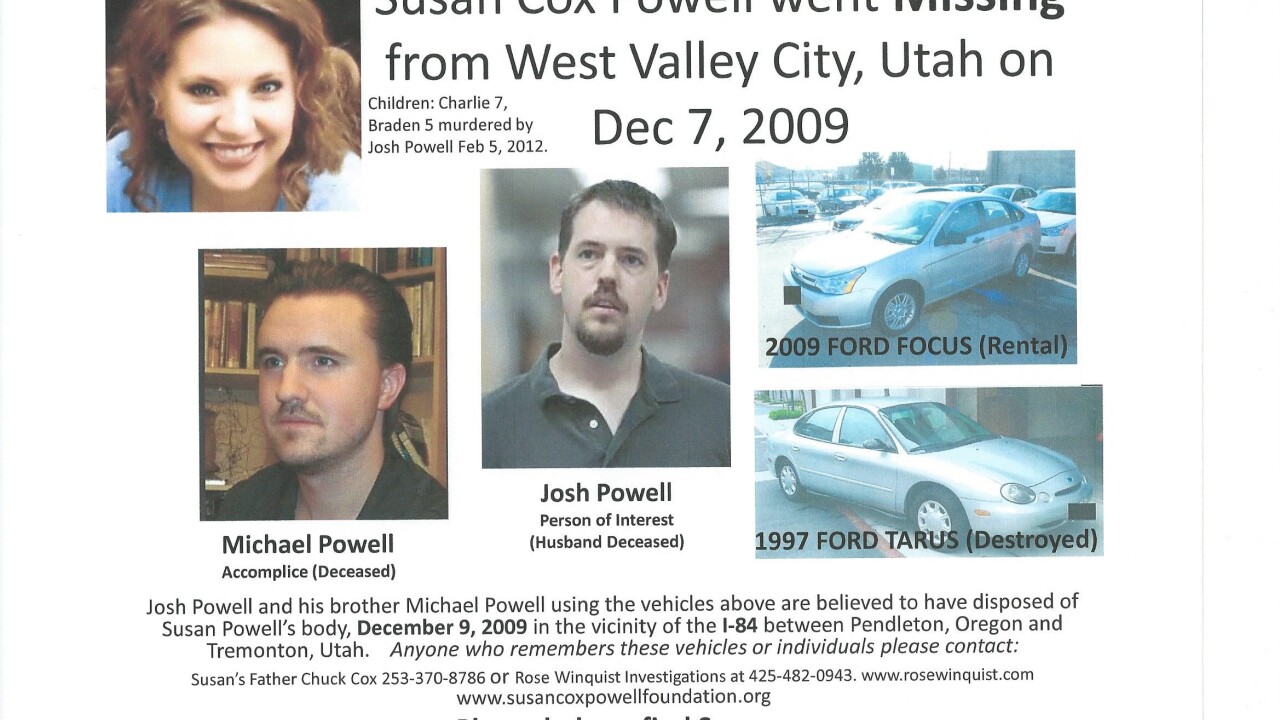 ONTARIO, Oregon -- The family of Susan Cox Powell is launching a new search for the missing West Valley City woman.

Susan's father, Chuck Cox, is traveling down Interstate-84 from Pendleton, Oregon to Tremonton, Utah, in an effort to generate new leads and look for any clues to her disappearance.

At gas stations, diners, city offices and police departments, Cox and his daughter, Denise, handed out fliers with Susan's picture on them. They included information about her husband, Josh Powell, the police's "person of interest" in her disappearance. The fliers also had a picture of Josh's brother, Michael Powell, whom police have claimed may have helped dispose of Susan's remains.

West Valley City police have said that in the days after Susan vanished in December 2009, Josh Powell left a police interview and rented a car. He put more than 800 miles on it. Where he went remains a mystery. Police have told FOX 13 they suspect Michael Powell may have transported Susan's body and dispose of it.

"We know that Michael's car was in Baker, and we know it was towed to Pendleton, and we know that the cadaver dogs hit on it," said Rose Winquist, a private investigator hired by the Cox family to re-examine the missing persons case.

Winquist helped pepper small towns in Oregon and Idaho with fliers, also stopping to talk to local police agencies about the missing persons case. She said she had already received some new tips.

"I've had several phone calls from people that say they've tried to give information to the West Valley City police and just didn't get a call back," she told FOX 13. "I'm not sure what that's about but I intend to call every single of of them back."

Cox said he hoped people in Oregon and Idaho would see the fliers and it would jog their memories.

As they traveled down I-84 through Oregon and into Idaho, Chuck Cox and Denise would take note of places they would like to organize volunteer searches. They plan to wrap up their trip on Wednesday, where they will stop in Tremonton, Utah (where police claim Josh Powell activated a cell phone shortly after Susan disappeared).

Chuck Cox said he would like to meet with West Valley City police this week now that the active phase of his daughter's missing persons case is closed. He said detectives have offered assistance should volunteers find anything.

"We've actually noted a lot of places that on the way back, we're going to stop and search," Denise Cox said. "Because you get that feeling, that it needs to be covered. And if we find something great. If not, y'know, can't say we didn't try."

Anyone interested in volunteering to help search in the coming weeks can contact the Susan Cox Powell Foundation. Tips in Susan's missing persons case can be sent to Winquist Investigations.