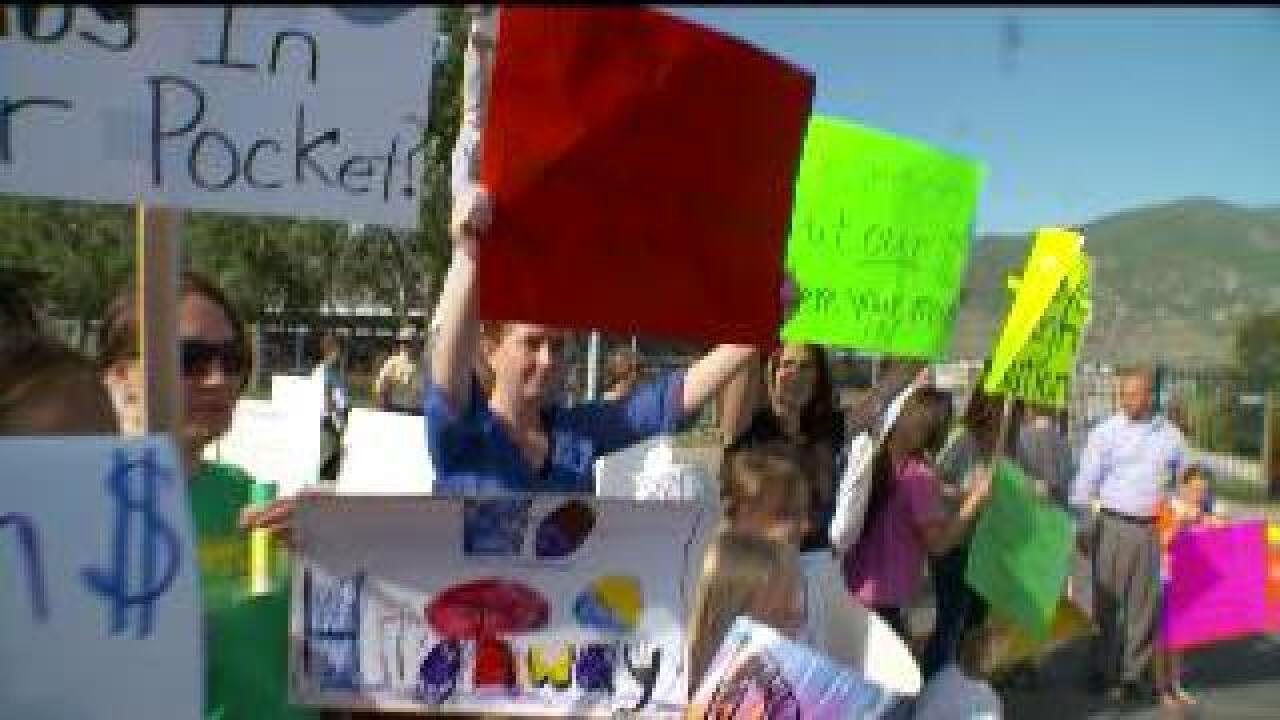 FARMINGTON -- Hundreds of people packed a meeting to weigh in on the proposed West Davis Corridor, a 20-mile extension of the Legacy Parkway.

Blasting AC/DC's "Highway to Hell," about a hundred people stood outside the Legacy Events Center waving signs condemning the road. They were joined by environmental groups who have united to stop the West Davis Corridor, an extension of the Legacy Parkway that will stretch from Farmington to Hooper.

"Were questioning should this go at all? Is there a need for this freeway?" said Lori Kalt, the president of the citizen's group "Save Farmington."

Inside the fairgrounds, hundreds of residents weighed in on the Utah Department of Transportation's proposed starting point for the road -- Glovers Lane or Shepard Lane.

"I don't want Farmington to be surrounded by a freeway," said Nate Cook, who favors the Shepard Lane option.

UDOT has said it favors the Glovers Lane option.

"It avoids key community impacts," said Randy Jefferies, the project manager. "Impacts to a stream in Farmington, for example, a railroad and the golf course community as well as various historic properties."

One woman sobbed as she spoke in favor of choosing Glovers Lane, saying that it would impact less people.

"I don't want anyone's quality of life to be ruined," she cried.

Others wanted to know why the West Davis Corridor even needed to be built at all with all of the money invested in the Utah Transit Authority's Frontrunner, which goes to Ogden.

Jefferies said the West Davis Corridor is being designed in anticipation of massive growth in Davis County.

"Over the next 30 years, we will have an increase in population. Our housing will almost double, that brings transportation demands and challenges," he said. "The West Davis Corridor will help to meet that challenge by reducing levels of congestion by 60 percent."

Questions remain about how the West Davis Corridor will be designed. The Legacy Parkway has a unique set of design standards which came about as a result of years of litigation between the state and environmental groups. There is a 55 mile-per-hour speed limit, trucks are banned (except in emergency situations), no billboards, no street lights and thousands of trees are planted alongside the Legacy Parkway.

UDOT has not said if it would implement those design specifications for the West Davis Corridor; Jefferies has said he would like to hear public comment on it.

Environmentalists, who brought the litigation that locked up the Legacy Parkway project for years over traffic, pollution and wetland concerns, told FOX 13 they would not rule out another round of lawsuits to put the brakes on the West Davis Corridor.

"I think all options are being considered," said Lynn DeFreitas, the executive director of Friends of Great Salt Lake.

Dr. Brian Moensch, the president of Utah Physicians for a Healthy Environment, said his group would join any litigation.

"There's enough determination that there's no question that this will get challenged all the way to the top," he said.