After days of hell, progress made fighting ruinous wildfire near Colorado Springs 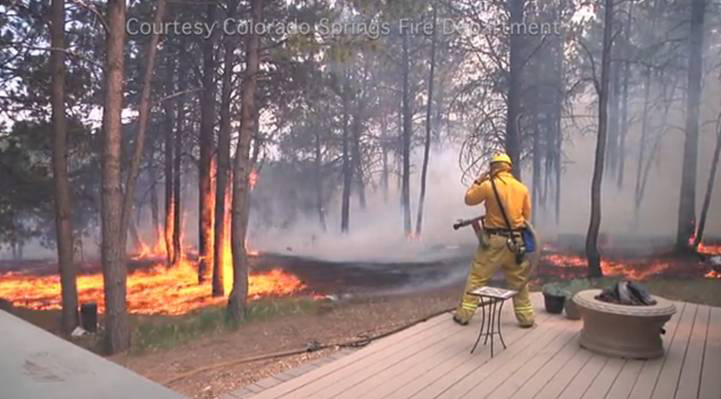 By Greg Botelho and George Howell

COLORADO SPRINGS, Colorado (CNN) — The firefighters are on the offensive.

Over several hellish days, the Black Forest Fire singed more than 15,000 acres north of Colorado Springs. What’s left behind, in some areas, “looks like a nuclear bomb went off,” according to El Paso County Sheriff Terry Maketa.

Then came some rain, more clouds, less wind and — very much related to all of that — marked progress Friday. That continued into Saturday, as defined by a few simple measures: no more structures destroyed, no more area burned and more inroads corralling what’s left.

Then, as if addressing the fire itself, he added, “We’re ready for it … Show yourself, we’ll be there to fight right back.”

In the first few days after the first broke out, for still unexplained reasons, crews had zero containment on the Black Forest Fire as it ravaged woods and neighborhoods. County spokesman Dave Rose told CNN it appeared to be the most destructive in the history of Colorado — a state that’s all too familiar with devastating wildfires.

As of Saturday afternoon, authorities had counted 473 structures totally lost due to the four-day-old blaze, with another 17 partially damaged. Two people had died.

The reason for that mix — why, for the most part, homes were either destroyed or escaped unscathed — was the speed and intensity of the flames, Maketa explained Saturday.

In some areas, there’s no number on the house, no mailbox and next-to-no other signs that someone had lived there, just a few days ago.

“You can’t even recognize where there was a house or some other kind of structure,” the sheriff said. “That is the level of incineration and destruction that took place in some areas.”

But things changed for the better Friday. In the morning, the blaze was 5% contained. By evening, it was 30%.

That pivotal number continued to improve through midday Saturday, when Harvey said there was 45% containment.

Not just that, but authorities are noticing fewer hotspots and fewer flare-ups than they have in days. All of it is positive news, even as Harvey warns that there’s still material sitting on the ground, waiting to be burned, if conditions suddenly change or firefighters let down their guard.

Still, thousands remain evacuated — some of whom have lost their homes, others who live in places that remain too dangerous to renter.

“It’s been a pretty good emotional roller coaster,” said Chris Schroeder, one of those who live in the Black Forest Fire evacuation zone and now has little to do except hope and wait.

Getting him and others off of that wild ride, by saving their homes, remains the primary mission of those on the front lines of the blaze.

More than 1,000 personnel — more than at any point this week — were part of the firefighting effort Saturday. They included boots on the ground, as well as helicopters and tankers overhead.

Said Maketa: “We’re hoping to gain inches each day to get people’s lives back to normal, where it can be returned to normal.”