NTSB: Pilots asked to do a ‘go-around’ 1.5 seconds before impact 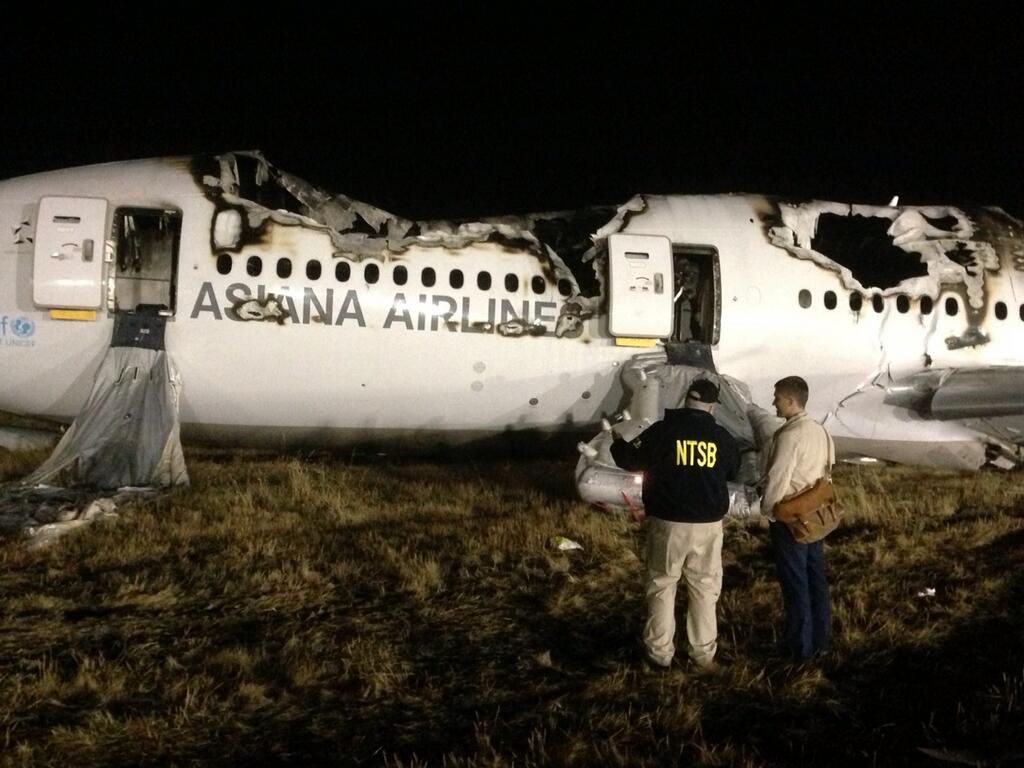 (CNN) — The cockpit voice recorder of Asiana Airlines Flight 214 appears to show the pilots tried to abort the landing just 1.5 seconds before it crashed at San Francisco International Airport, the head of the National Transportation Safety Board said Sunday.

The pilots appear to have increased speed 7 seconds before impact, and they then “called to initiate a go-around 1.5 seconds to impact,” Deborah Hersman said.

The NTSB’s preliminary assessment of the plane’s cockpit and flight data recorders show the flight was coming in too slow. But when asked if pilot error was to blame, Hersman said the crash landing was still under investigation.

“I would discourage anyone from drawing any conclusions at this point,” she said, adding that investigators are still working to corroborate the information on the recorders.

But what happened inside the cockpit of the Boeing 777 may well be the key factor in Saturday’s accident that killed two people, injured 182 and forced the temporary closure of one of the country’s largest airports.

In what appears to be a matter of seconds, Asiana Flight 214 went from routine landing to a disaster.

Amateur video surfaced on CNN Sunday showing the plane approaching the runway and striking what appears to be a seawall before spinning counterclockwise and coming to a stop. Fred Hayes said he shot the video about a mile from the crash scene.

Some of the answers to what happened may just hinge on what investigators found on the cockpit and flight data recorders.

“What we need to do is corroborate the information we have both on the flight data recorder and the cockpit voice recorder,” Hersman said.

For example, she said, the increase of power in the engines appears to correlate with the cockpit crew’s request to “go-around,” a call to abort the landing and try it again.

Asiana Flight 214, with 291 passengers and 16 crew members, was at the end of a more than 10-hour direct flight from Seoul, South Korea, when it began its descent into California’s second largest airport.

According to the recorders, the flight approach appeared normal as the 777 descended, and “there is no discussion of aircraft approach” among the crew.

The target speed for the approach of Asiana Flight 214 was 137 knots, and the crew can be heard on the cockpit voice recorder acknowledging the speed, Hersman said.

But the speed was significantly below 137 knots, and “we are not talking about a few knots,” she said.

At about four seconds before the plane crash landed, the pilots received an “oral and physical” warning inside the cockpit that the plane was on the verge of an aerodynamic, meaning it was about to lose its ability to stay in the air.

The warning — known as a “stick shaker” — included a verbal warning the plane that was flying too low, and a physical warning when the throttle shook.

The NTSB has ruled out weather as a problem and said that conditions were right for a “visual landing.”

Asiana CEO and President Yoon Young-doo has said there was no engine failure, to his knowledge.

Survivors of the crash were being treated Sunday for injuries ranging from paralysis to “severe road rash.”

In all, 182 people were hospitalized and 123 others walked away from Saturday’s crash landing. The number who emerged unscathed prompted the city’s fire chief to describe it as “nothing short of a miracle.”

On the runway, medics found the bodies of the two teen girls lying next to burning wreckage. They were identified by Asiana Airlines as Ye Mengyuan and Wang Linjia, both Chinese nationals.

“We were expecting a lot of burns,” said Dr. Margaret Knudson, San Francisco General Hospital’s chief of surgery. “But we didn’t see them.”

At San Francisco General, 19 survivors remained hospitalized, six of them in critical condition.

Many of the injured said they were sitting toward the rear of the aircraft, said Knudson. Several suffered abdominal injuries and spine fractures, some of which include paralysis and head trauma, Knudson said. Many patients also were treated for “severe road rash,” she said, which suggests “that they were dragged.”

The conditions of victims at other hospitals was unclear Sunday.

Survivors and witnesses reported the 7-year-old airliner appeared to be flying too low as it approached the end of a runway near the bay.

“Stabilized approaches have long been a safety concern for the aviation community,” Hersman told CNN on Sunday, saying they represent a significant threat. “We see a lot of runway crashes.”

“We want to understand what was going on with this crew so we can learn from it,” Hersman said.

Hersman said her team hopes to interview the pilots in the coming days.

Internal damage to the plane is “really striking,” she said, and officials are thankful there weren’t more deaths.

“The tail of the Asiana flight hit the runway and the aircraft veered to the left out of the runway,” said Choi Jeong-ho, head of South Korea’s Aviation Policy Bureau.

Airport technology called the Instrument Landing System, or ILS — which normally would help pilots correctly approach the runway — was not operating at the time, according to a Federal Aviation Administration bulletin.

“There are a lot of systems that help support pilots” as they fly into busy airports, Hersman said.

Some of these systems alert the pilots.

“A lot of this is not necessarily about the plane telling them” that something may be wrong, she said at an earlier briefing. “It’s also about the pilot’s recognition of the circumstances and what’s going on.”

The ILS integrates with the aircraft’s cockpit to trigger an audible warning, consultant and retired 777 pilot Mark Weiss told CNN. “You hear a mechanical voice that says, ‘too low, too low, too low.'”

The ILS is “nice to have,” Weiss said, “but it’s not critical on the 777.” There are redundant systems aboard the aircraft that would provide similar warnings if the plane was coming in too low, said Weiss, who has landed 777s hundreds of times.

The pilot operating the aircraft was a veteran who had been flying for Asiana since 1996, the airline said.

The names of the cockpit crew have not been released by Asiana Airlines or the NTSB.

Although temperatures were mild on the runway Saturday, a London crash landing of a British Airways 777 in 2008 raised suspicions about ice contributing to the San Francisco tragedy.

Investigators believe the UK incident was caused by ice forming in the fuel system as the plane flew through cold air over Siberia en route to the UK. Seventeen people were hurt in that crash.

“Even if the landing temperature was 65 degrees (Saturday), if they were at 10,000 feet shortly before, it potentially could have been a problem,” said Weiss. “But not necessarily. It’s something they want to take a look at.”

Survivors reported hearing no warning from the cockpit before the landing.

Passengers scrambled to exit a crash scene that one survivor described as “surreal.”

When rescuers arrived, they found some passengers coming out of the water, said city fire chief Joanne Hayes-White.

“There was a fire on the plane, so the assumption might be that they went near the water’s edge, which is very shallow, to maybe douse themselves with water,” she said.

Some jumped out or slid down emergency chutes with luggage in hand.

South Korean investigators will work alongside U.S. investigators. Choi said it could take up to two years to learn exactly what caused the crash.

Statistically, 2012 was the safest year in terms of aviation accidents worldwide since 1945, according to the Aviation Safety Network.

Data show that there were 23 fatal airliner accidents, which caused 511 deaths, according to ASN stats. That’s well below the 10-year annual average of 34 accidents and 773 fatalities.

Survival rates have improved due to better staff training and safety advances during the 1980s and 1990s, according to the group.