PROVO, Utah -- A Provo couple has quite the cleanup on their hands after a police chase ended on their doorstep—literally.

Police said a suspect caught in a drug deal had no intention of just giving up, but it was actually the cop chasing him who crashed into the Flanagan's home.  And possibly the biggest surprise of all, this has happened to this family before!

"..and that's when I went back and woke up my husband, and this is the damage after they removed the vehicle," Flanagan said.

A cop's SUV lodged in her porch and inside the house:

Flanagan’s shower was destroyed. The cop's vehicle collided into her home after losing control during a Pit maneuver on a drug suspect Provo police know all too well.

"About a year ago we had a chase with him where a gun was involved as well," said Lt. Matt Siufanua with the Provo Police Department.

Around 3:30 a.m. on Wednesday, undercover cops had Richmond under surveillance at Powerline Park.

"They knew the buy was going to go down," Siufanua said.

After that drug deal, cops said three other people took off with Richmond.  Police thought he was armed and say he refused to pull over as they chased him into the Flanagan's neighborhood.

"As the vehicle was actually in pursuit, they were throwing things out of the window, after the pursuit they were able to find methamphetamine in the car; they were not able to find the gun," Siufanua said.

The suspects were busted right along with the Flanagan's home.

"We have a flagpole to be replaced and the structural damage will have to be determined," Flanagan said.

She's not upset.  "We're very thankful that nobody was hurt," she added.

She’s also glad the suspects are off the streets, but the crash is certainly ironic for this Provo family.

When Judy Flanagan saw the damage, she said: "Oh crap! Oh no, not again, because this happened before between 15 and 20 years ago when we had two of our children on missions.  It was a pursuit, and the person being pursued lost control on the corner and ran into our house." 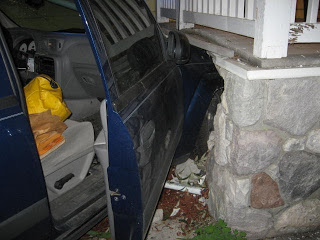