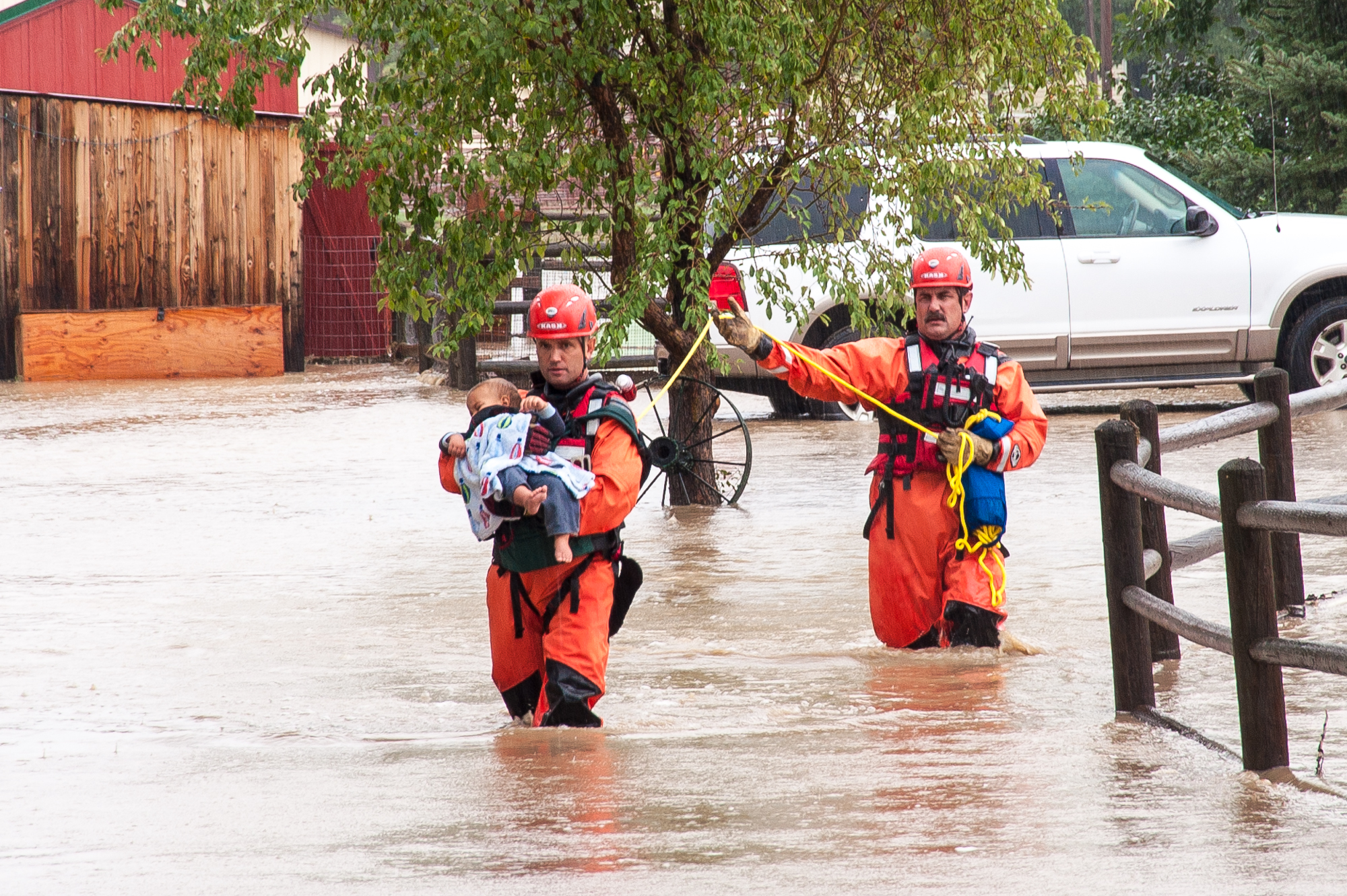 As Governor John Hickenlooper noted, Coloradans went to bed Wednesday night with no inkling that overnight rain could be heavy enough to flood canyons and send rivers of water from Boulder south to Colorado Springs.

Boulder County Sheriff Joe Pelle said the “devastating storm” dumped more than half a foot of rain on the region during a 19-hour period.

The widespread flash flooding washed out roads, pushed dams to their limits and beyond and killed at least three people.

Obama signed an emergency declaration for Colorado, an action that helps allocate federal assistance to the issue.

There were dramatic rescues Thursday, including a man pulled from an overturned car in rushing water on live television. But for much of the day, rescuers had to wait at the edge of impassable roads or for skies to clear enough for helicopter flights.

Helicopters were still grounded as of 6 p.m. MT Thursday, said Ashlee Herring, a spokesperson for the city of Boulder.

The forecast was not encouraging. The National Weather Service issued a flash flood warning “until further notice” for Boulder Creek Thursday evening.

The worst of the reported damage has come in Boulder County, where the National Weather Service reported that a 20-foot wall of water roared down a mountain canyon north of the city.

One death was confirmed and another feared after a car stopped in the rushing water. Witnesses reported a woman emerged from the car and was swept away by the water. A man left the car and tried to reach her and also was overcome, Boulder County Sheriff’s Cmdr. Heidi Prentup said. She said the man’s body had been recovered, while the woman was missing.

Bodies also were found in a collapsed home in Jamestown and on a roadway in Colorado Springs.

Lyons, a small town of 2,000 near the foothills of the Rocky Mountains, was cut off by what city officials described as a 500-year flood.

People were using the city’s Facebook page to search for loved ones, hunt for medicine and even ask for pet food. One post described people riding to safety on a backhoe.

City officials used Facebook to appeal to residents to take in people and pets who were sheltering at an elementary school because they feared the school would lose power Thursday night.

One Lyons resident said it was “almost amusing” to see news video of “debris here and there” in other cities. “They haven’t seen this stuff here yet,” she wrote. Photos on the Facebook page showed swirling water halfway up street signs and a washed-out bridge.

Larimer County Sheriff Justin Smith said some residents there face the dilemma of whether to try to move to safer shelters over bridges that may have been damaged. They will “have to use their own judgment,” he said.

An emergency message from the sheriff’s office to residents of Big Thompson Canyon said, “If you are cut off because of a compromised bridge, you need to stay at your residence but have a plan to get to higher ground at a moment’s notice.”

Pelle said emergency crews were worried about a Lyons Fire Department crew stuck on a mountainside near a washed-out road. Hypothermia from the cold, wet conditions was of particular concern, he said.

As of Thursday evening, authorities in Boulder had not been able to make contact with the Lyons Fire Department to confirm that the firefighters had been rescued, Herring said.

As dawn broke over the region, Pelle said he was “amassing a large-scale effort” to rescue those who are trapped, reach those who are stranded and deliver much needed aid to places like Lyons, where floodwater overtopped several dams protecting the town.

Hickenlooper said the state didn’t immediately need outside help. The problem was reaching the most critical areas.

Rescuers have been frustrated by debris, impassable roads and mudslides, Pelle said.

“This is not your ordinary disaster,” Pelle said. “All the preparation in the world, all the want-to in the world, can’t put people up those canyons while debris and walls of water are coming down.”

The rain started falling in earnest about 6 p.m. Wednesday and continued into Thursday, sometimes at the rate of about an inch an hour, according to radar estimates. That added up to about 6 to 7 inches of total rainfall.

“The rain, it almost feels like hail, the drops are so thick,” University of Colorado Boulder student Ryan Colla told CNN affiliate KUSA. “It just keeps coming and coming, and when you think it’s going to subside, it starts to rain down harder.”

The sudden influx of water turned Boulder Creek — which runs through the campus and other parts of the city bearing its name — into a high, fast, muddy and dangerous torrent, Colla told the station.

At its peak, Boulder Creek was flowing at 16 times its normal rate for this time of year, city spokeswoman Sara Huntley said.

But that was not the only stream causing trouble, Pelle said. Unlike the last devastating flood in Boulder in 1969, this storm caused virtually every waterway in the area to overflow, he said.

Water rushed through Aurora, east of Denver, swirling and breaking like an ocean hitting a beach. CNN affiliate KCNC captured video of one person stumbling dangerously while trying to cross an Aurora street and finally struggling at the edge of the water. Three onlookers pulled that person to safety.

In Estes Park in Laramie County, KCNC video showed the Big Thompson River rushing above both sides of a bridge and flooding several small businesses.

“It could rain again all night,” he said.

Between 25 and 30 roads were closed Thursday afternoon in Boulder County, Prentup said.

Several roads washed away, including one near Lafayette — about 12 miles southeast of Boulder — where rescue crews staged the dramatic rescue of a man from an overturned, partially submerged car.

Lafayette Fire Chief Gerry Morrell said it appeared three cars driving through pre-dawn darkness and heavy rain plunged into the void left when water washed out the road. Two other motorists got out of their cars, at least one with the aid of firefighters.

At first, rescuers feared the last car’s occupant may have died after more than 30 minutes in the partially submerged car, Morrell said.

The rescue — captured live on television — nearly went awry when the car, which had been pulled up so that it was on its side, turned back onto its roof in the swift water just as the man was preparing to climb through a window broken open by his rescuers.

“I was aghast,” said Morrell, who watched the rescue unfold from the riverbank.

All three people were taken to a hospital for treatment of minor injuries, according to fire officials.

A firefighter in Boulder had to climb a tree to escape the initial surge of water. Although injured, the firefighter made it to a nearby home, Prentup said.

In Lyons, water was flowing over the tops of five dams, Boulder County spokeswoman Gabi Boerkircher said. The dams had not broken, but emergency officials were monitoring them very closely, she said.

The extent of the damage was widespread but difficult to pin down, Pelle said.

“We’ve lost roads, we’ve lost bridges, cars, homes,” he said. “And we are just now trying to assess the scope of the damage.”

Hickenlooper said he will ask President Barack Obama for an emergency declaration, a step toward federal funds to help repair damaged roads, bridges and wastewater plants.

‘Not a day to travel’

While at least one shelter was filling up, emergency officials said they had asked few people to evacuate because of the danger of driving through floodwater. The only active evacuation order was in the city of Jamestown, Prentup said.

“This is no day to travel,” he said. “It’s a good day to hunker down and watch the news and find out what’s going on.”

Many roads in the county were closed or impassable, and city and county offices, schools and even the university were closed Thursday. They will remain closed Friday.

The school also had to relocate 21 undergraduates from two residence halls, he said. The rooms of 11 were so badly damaged, they will have to move for the semester, he said.

No injuries were reported on campus.

Early Thursday, the floodwater in Boulder completely washed out Skunk Creek Trail, a bicycle path that goes underneath 27th Street, according to Drew Landis, who filed images of the creek-turned-raging-rapids to CNN’s iReport.

“I’m 6-foot-2 and the creek, which also runs through the underpass, sits about a foot below the height of the footpath,” he told CNN. “So that’s about 5 to 6 feet of rushing water.”

An area where homeless people often camp just south of the campus near Skunk Creek was under 5 feet of water Thursday, graduate student Alan Smith said.

He described water pouring down bike paths and out of drainpipes.

“It’s really cool to see these conduits spewing out water from the base of these buildings,” Smith said. “It’s like a Super Soaker. They’re spewing water several feet away.”