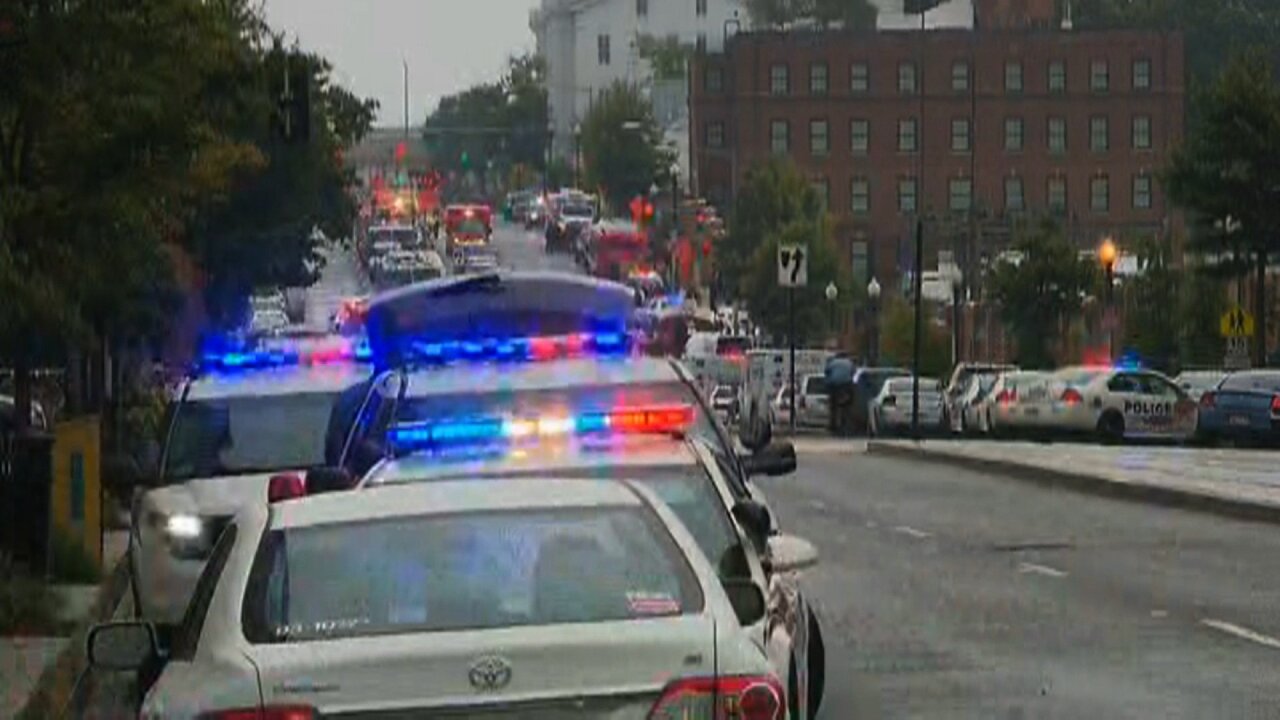 A gunman dressed in all black fired shots Monday, September 16, 2013, inside the U.S. Navy Yard, injuring at least 10 people, according to the Navy and a Washington police spokesman. Dozens of police are pictured on the scene.

WASHINGTON (CNN) — As investigators scoured military contractor Aaron Alexis’ past for clues to what sparked his shooting rampage at Washington’s Navy Yard, surviving victims healed and the nation paused to mourn its latest mass shooting.

“To my knowledge, there is no explanation for the violence that occurred yesterday,” Senate Majority Leader Harry Reid said Tuesday after a moment of silence honoring the 12 people who died when Alexis opened fire inside Building 197 of the Navy Yard.

A former sailor with a history of outbursts and what two Navy officials described as a “pattern of misconduct” in the service, Alexis had recently contacted two Veterans Affairs hospitals, possibly seeking treatment for psychological issues, two law enforcement sources told CNN.

Friends also said he was upset about pay and benefits issues from a previous contracting stint, but said they never expected such violence from him.

But investigators have publicly offered no clues as to what his motive may have been. Authorities said they were certain he had acted alone. Terrorism hasn’t been ruled out but seems unlikely, Washington Mayor Vincent Gray told reporters.

The Navy Yard was closed to all but a handful of essential Navy employees Tuesday as authorities worked a detailed investigation of the shooting scene.

Police Chief Cathy Lanier said Tuesday that Alexis had “multiple contacts” with officers from several agencies during the shooting spree and before he was ultimately shot to death. She said she had “no doubt” that the actions of officers saved numerous lives.

And amid questions over how Alexis was able to pull off the shooting on a secured military base, CNN was first to report Tuesday that Defense Secretary Chuck Hagel ordered a worldwide review of security measures at U.S. military bases. A senior Pentagon official revealed the the information.

Meanwhile, three of the eight victims wounded in the shooting were doing better at MedStar Washington Hospital Center, doctors said.

One woman, shot in the head, was in good condition, said Dr. Jane Orlowski, chief medical officer at the hospital. Two others, including a Washington police officer, were in fair condition, she told CNN’s “New Day.”

Orlowski said the woman who suffered the head wound told her she was underneath her desk when the gunman came by. The bullet grazed the finger of her upheld hand and went into the scalp behind her right ear, she said.

“Thankfully, it sort of hit the bone and bounced off,” she said. “She is an extremely lucky young lady.”

In addition to ongoing activity at the historic base, FBI agents were at the hotel where Alexis had been staying. They could be seen bringing out cardboard boxes and loading them into SUVs.

Agents are investigating Alexis’ activities in cities where he had lived across the country, said Valerie Parlave, assistant director in charge of the FBI’s Washington field office. She declined to discuss any possible motive.

At the Navy Yard, evidence recovery teams are engaged in what she called a “methodical and intensive process” that will including modeling bullet trajectories and mapping the scene.

The investigation into what happened, and why, will be far-ranging, said Shawn Henry, a former executive assistant director of the FBI and president of the security firm Crowdstrike Services.

Investigators will want to know if anyone at the Navy Yard had contacts with Alexis before the shooting and if it seemed he was conducting reconnaissance at the base, Henry said. They’ll also want to develop a precise timeline of the incident to help understand how he was able to carry it out.

Authorities were also appealing to the public for help.

“No piece of information is too small,” Parlave said.

Before working as a military contractor, Alexis had served in the Navy as a petty officer working on electrical systems.

The Navy moved to discharge Alexis in 2010 because of a history of disciplinary issues, including eight instances of misconduct while on duty, a U.S. defense official told CNN.

The incidents involved insubordination, disorderly conduct, unauthorized absences and at least one instance of intoxication, the official said.

Those military offenses were not enough to warrant a general discharge, and without a civilian conviction, the military resorted to an honorable discharge in January 2011, the official said.

Ready Reserve status is a designation for former military members who don’t actively serve in a Reserve unit but who can be called up if the military needs them.

In addition to the military issues, he also had run-ins with police: In Seattle, he was arrested in 2004 for shooting out the tires of another man’s vehicle in what Alexis later told detectives was an anger-fueled “blackout.”

DeKalb County, Georgia, authorities said Tuesday they had arrested Alexis in 2008 on a disorderly conduct charge, police there said Tuesday.

A friend and former housemate, Kristi Suthamtewakul, told CNN’s “New Day” that she had noticed personality changes in Alexis over the last few months, but nothing indicating the potential for such violence.

“Aaron was a very polite, very friendly man,” she said.

Among other problems, he had been frustrated about pay and benefits issues after a one-month contracting stint in Japan last year, Suthamtewakul said.

“That’s when I first started hearing statements about how he wanted to move out of America,” Suthamtewakul said. “He was very frustrated with the government and how as a veteran he didn’t feel like he was getting treated right or fairly.”

Another friend, Texas resident Michael Ritrovato, said Alexis had recently been frustrated with his employer over pay.

But Ritrovato said his friend never showed signs of aggressiveness or violence, though he played a lot of shooting video games online.

“It’s incredible that this is all happening, because he was a very good-natured guy,” Ritrovato said. “It seemed like he wanted to get more out of life.”

Witness: People pushed their way out of building

D.C. Metropolitan Police officials told CNN that Alexis drove onto the installation and parked before walking a short distance to Building 197, where the killings occurred.

Alexis had legitimate credentials to enter the base, Parlave said Tuesday.

Once inside, according to an official, Alexis made his way to an overlook above the atrium and opened fire.

Two witnesses told CNN affiliate WJLA-TV that they heard a fire alarm go off in the building where they worked, then saw a man with a firearm down the hallway as they left the building.

“He aimed the gun and fired our way,” Todd Brundidge told WJLA.

People frantically ran down stairs to get out of the building, Brundidge said.

“They were pushing. They were shoving. People were falling down,” he told WJLA. “As we came outside, people were climbing the wall trying to get over the wall to get out. …. It was just crazy.”

On Tuesday, Washington police released the full list of victims. They are:

Authorities recovered three weapons, including a shotgun that investigators believe Alexis brought onto the base, federal law enforcement sources with detailed knowledge of the investigation told CNN on Tuesday. The other two weapons — handguns — may have been taken from guards, the sources say.

Earlier information that Alexis may have used a semiautomatic AR-15 rifle may have been incorrect, the sources said.

“The shooter rehearsed this in his mind, and he probably walked through it a few times physically ahead of time,” he told CNN’s Chris Cuomo.

“He wanted to make sure he did this,” Voss said. “So he came in very focused, made sure he wasn’t distracted, he probably did exactly as he had rehearsed previously.”

The shooting was the worst since December’s mass killing at Sandy Hook Elementary School in Newtown, Connecticut. Gunman Adam Lanza killed 23 people, 20 of them children, in that incident.

While life was returning to normal in Washington — streets near the base were mostly open, and a Washington Nationals baseball game delayed Monday was scheduled to be made up Tuesday — the shooting was the topic of conversation Tuesday for many.

In remarks before the Senate’s observation, Reid said the nation’s thoughts were with those who had lost loved ones in the shooting.

“There are no words that can possibly ease the pain of the rampage and certainly the deaths involving a dozen human beings who were killed yesterday at the naval yard,” he said. “I hope it is some small comfort that this city, this institution of the United States Senate and the whole nation mourn right alongside them.”