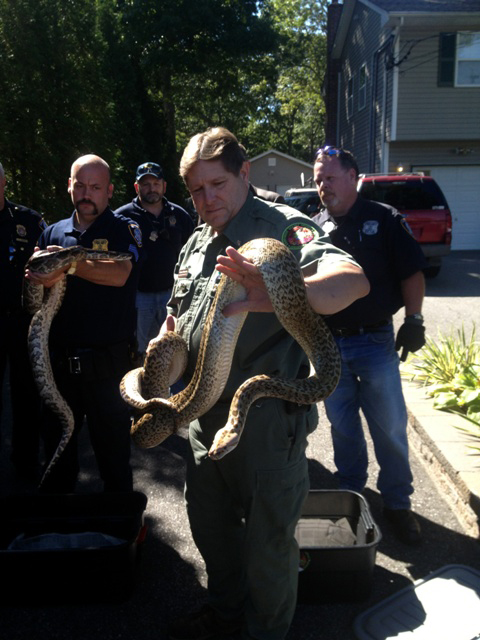 NEW YORK (WPIX) — Undercover officers got a surprise during a worker’s compensation investigation when they discovered 850 snakes inside a Shirley man’s house.

The reptiles, including two Burmese Pythons, were stored in a detached garage of the Auborn Ave. house, along with multiple turtles and turtle eggs — all valued at roughly $500,000.

The illegal snake business belongs to Richard Parrinello, a Brookhaven animal control officer, according to authorities, who revealed Thursday he is running an online business called “Snakeman’s Exotics.”

“I’m shocked, and dismayed that in a residential community like Shirley, this individual would put his neighbors at risk by selling reptiles and snakes as large as six-feet in length out of his home,” said Councilwoman Constance Kepert. “I want to thank our Town Investigators, as well as other law enforcement agencies involved in this investigation, who discovered and put an end to this illegal, and potentially dangerous operation.”

“This is the latest in a series of actions to clean up this Town. These alleged actions not only hurt our taxpayers, but also potentially endanger our residents,” said Councilman Dan Panico. “We will continue to vigorously pursue those who would defraud the taxpayers and threaten the quality of life in our communities.”

Parrinello was issued two violations for the illegal reptile ring; charges are pending.