Park City police seized more than 17 pounds of meth, which on the street could turn into more than 7,000 drug deals.

“This case has sent a very, very powerful message, and that message is simply this: We do have the sophistication required to conduct these types of investigations and take out some very high level people,” he said.

At the beginning of the year, police noticed an increase in drug use and activity in Park City, which led them to members involved in the trafficking operation.

Chief Wade Carpenter, Park City Police Department, said there was activity indicative of drug use in the area.

“We had a lot of break-ins, a lot of property crimes, violent crime was rising, and we also noticed we had three heroin overdoses,” he said.

Investigators followed up on those smaller crimes, which led them to the distributors.

Police said they tracked phone calls between members of the drug cartel to find the key players.

After three months of undercover work they carried out a series of raids Saturday to make the arrests and seize more than 17 pounds of methamphetamine.

“Essentially Park City was a sale head, that had several fingers that went into Colorado, across northern Utah into the Vernal area and some of those other areas,” Carpenter said.

Police said that, by the way the drugs were packaged, it looks like they were smuggled here from Mexico by dealers with ties to a known drug cartel.

Police said they expect to make more arrests as the investigation continues. 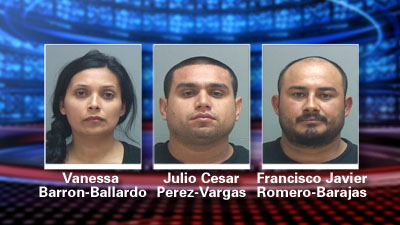