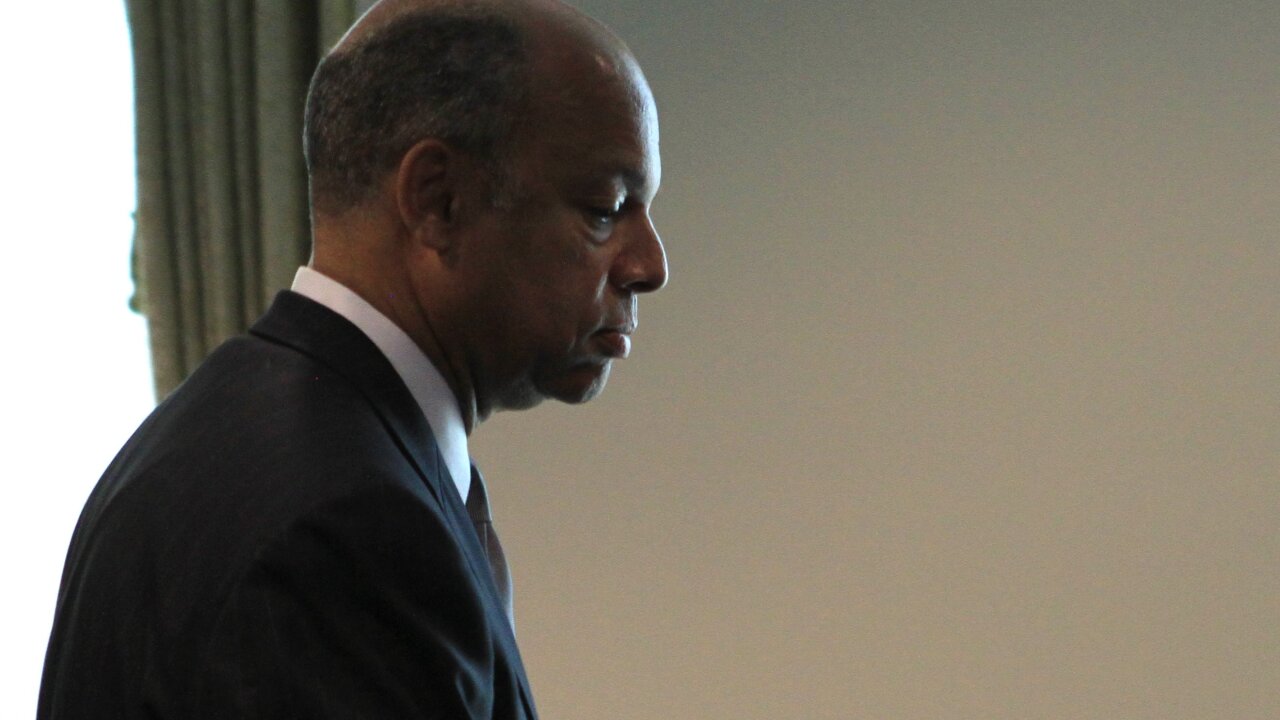 Speaking in the White House Rose Garden, Obama praised Johnson’s work leading the Pentagon’s 10,000 civilian and military lawyers as general counsel, a position he was named to in 2009 and held until he left for private practice last year.

Johnson is “an outstanding public servant who I’ve known for years,” Obama said of his nominee, who must be confirmed by the Senate.

A campaign contributor to Obama’s presidential bid in 2008, Johnson has been with the Obama administration for most of its existence, including working on the transition team.

“He demonstrated again and again the qualities that will make him a strong secretary,” Obama said, highlighting Johnson’s expertise, particularly on issues of terrorism.

Johnson, 56, was one of the key architects of Obama’s anti-terrorism tactics, especially the extensive use of drone strikes. At the Pentagon, he was responsible for the prior legal review and approval of every military operation approved by the President and defense secretary

Johnson was one of the first administration officials to look ahead towards the end of the so-called “war on terror.” In May, Johnson said the United States should no longer see combating terrorism as a “self-defeating” perpetual fight, but one that must at some point end, “like all wars.”

“Jeh was one of the leaders who spoke eloquently about how we meet today’s threats in a way that is consistent with our values, including the rule of law,” the President said. “He’s been there, in the Situation Room, at the moment of decision.”

How much opposition Johnson will face on the path to Senate confirmation remains unclear. Some past Obama nominations have been held up by months and even years. Several senators expressed trepidation at Johnson and his close connections to the President.

“DHS is the most mismanaged department in the federal government,” Sen. Jeff Sessions, R-Alabama, said in a statement.

“It would appear that the President plans to nominate a loyalist and fundraiser to this post. This is deeply concerning. This huge department must have a proven manager with strong relevant law enforcement experience, recognized independence and integrity, who can restore this department to its full capability.”

Sen. John Cornyn expressed much the same hesitation. The Texas Republican was particularly concerned with border security, an experience he worries that Johnson lacks.

“Rather than selecting someone who knows the unique dynamics of our Southern border, President Obama has tapped one of his former New York fundraisers,” Cornyn said in a statement.

“We need someone who knows how to secure the border, not dial for dollars.”

Johnson was also at the forefront of the repeal of the controversial “don’t ask, don’t tell policy” that banned openly gay members of the military. He was a key architect of the Pentagon report that explained how gay and lesbian service members would not affect combat readiness.

“Congress ended up using that report,” Obama said, “to justify repealing ‘don’t ask, don’t tell.’ And America and our military are stronger because we did.”

If confirmed, Johnson would be the fourth head of Homeland Security and the first African-American. Created by former President George W. Bush in the wake of the September 11, 2001 terrorist attacks, the agency is responsible for the entirety of the domestic U.S security apparatus, responding to natural disasters with FEMA and terrorism and border issues via the NSA, FBI and Border Patrol.

9/11 continues to have a strong influence on Johnson, who said when accepting the nomination that the native New Yorker had been in Manhattan when the planes struck the World Trade Center. The date is also his birthday.

“I wandered the streets of New York that day and wondered and asked, what can I do?” Johnson said.

“Since then I have tried to devote myself to answering that question.”

Johnson would replace former Secretary Janet Napolitano, who left the agency last month to head California’s public university system. The agency has since been run by acting secretary Rand Beers.