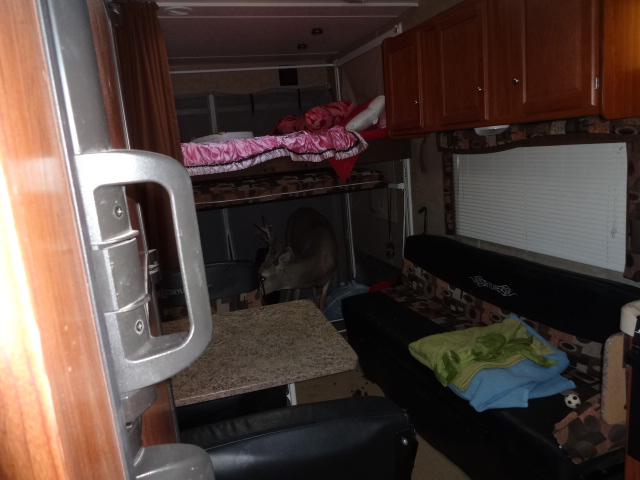 GARFIELD COUNTY — A 3-point buck was found inside a woman’s trailer after hitting it in Garfield County, officials said Monday afternoon.

A Garfield County Sheriff’s deputy discovered a deer inside the woman’s trailer after it had crashed into it making a hole the size of a 50-gallon drum.

At approximately 3 p.m. the woman reported to the deputy that she hit something while traveling on Utah Highway 89 at mile post 134. When sheriff’s deputy, Micah Evans, arrived on scene he inspected the hole and found no blood.

When he went into the trailer to see what she hit, he said he found a buck had gone through the front of the wall of the trailer and appeared uninjured.

Evans took a picture of the deer. When the flash went off, he said the animal charged and leapt from the trailer, jumping over a barbed-wire fence and running away.

“We’re going to have to fine you for hunting without a license,” said Sheriff James D. Perkins jokingly to the woman.

The woman replied, “But I didn’t kill it.”