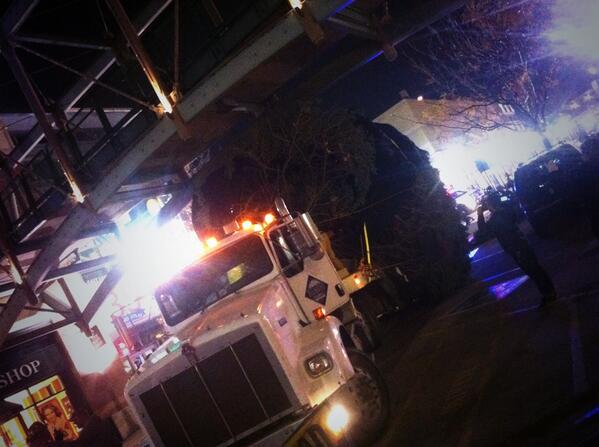 The massive 50-foot blue spruce was donated by a family in Cottonwood Heights, who said the tree had simply grown too large.

Weighing 10,000 pounds and measuring more than 20 feet in diameter, Big Piney literally stopped traffic at the intersection of 400 South and 300 West, where it ran into a traffic signal.

But the biggest challenge was yet to come.

When the tree finally arrived at The Gateway, several hours behind schedule, crews discovered Big Piney was too big to fit under the shopping center's two pedestrian bridges.

After shifting the tree around, workers took a deep breath and dragged it through, snapping branches as it cleared both bridges.

“Yes, I was holding my breath,” said Rochelle Fraser, marketing director at The Gateway. “And (the tree) did a little bit of damage, but it's great, and it's something we expect every year.”

“It's awesome,” said Tim Pulley, who came to watch the Christmas tree’s arrival. “It’s the first time I've seen it come here to The Gateway.”

“(It’s) been worth it all day,” said Brandon Coder, another visitor.

Even after Big Piney arrived at The Gateway, crews have a long night ahead of them, making sure the tree is standing straight and cabled down.

Fraser said Big Piney will be decorated with 300,000 to 400,00 lights for The Gateway’s “Light the Night” annual Christmas tree lightning celebration on November 23.