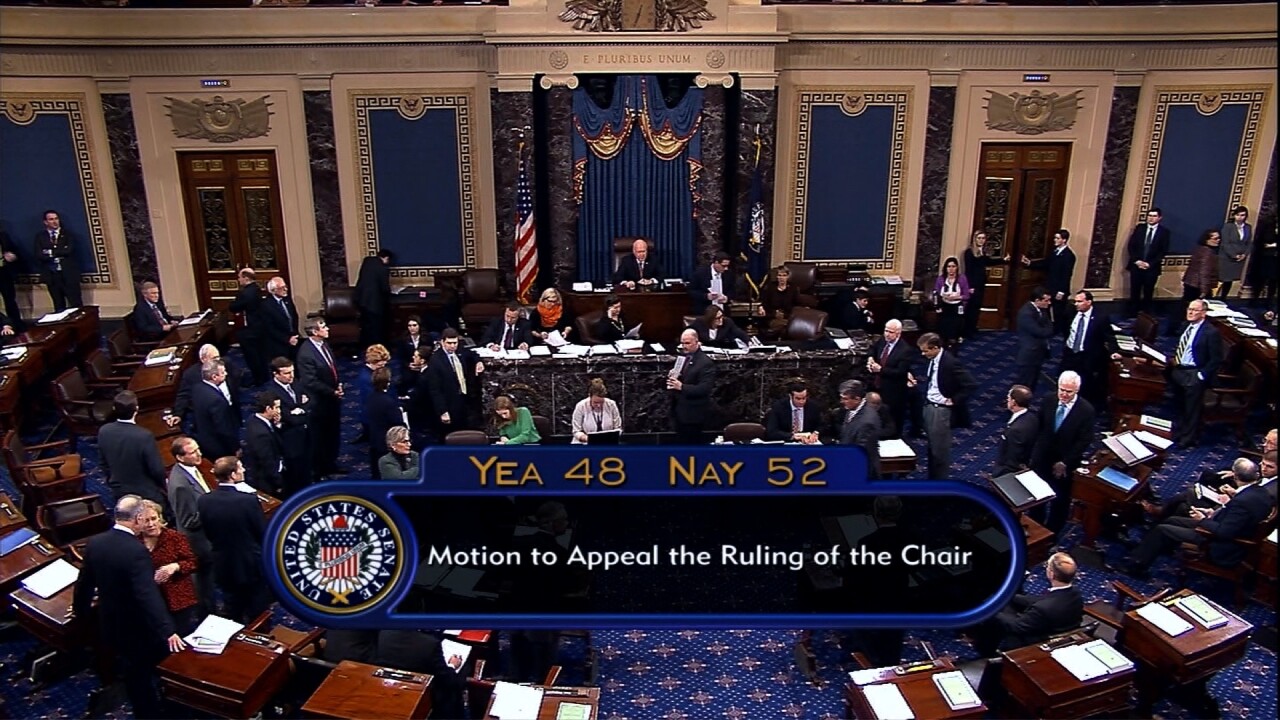 By a 52-48 vote, the Senate ended the ability of minority Republicans to continue using filibusters to block some of President Barack Obama’s judicial and executive nominations, despite the vehement objections of Republicans. Image courtesy Senate TV via CNN.

WASHINGTON (CNN) — Senate Democrats dropped the filibuster bomb Thursday, and now the question is what kind of fallout will result from the so-called nuclear option.

By a 52-48 vote, the Senate ended the ability of minority Republicans to continue using filibusters to block some of President Barack Obama’s judicial and executive nominations, despite the vehement objections of Republicans.

Majority Democrats then quickly acted on the change by ending a filibuster against one of Obama’s nominees for a federal appeals court.

Obama later cited what he called “an unprecedented patter of obstruction in Congress” during his presidency for the move led by Senate Majority Leader Harry Reid.

“A deliberate and determined effort to obstruct everything, no matter what the merits, just to refight the results of an election is not normal,” Obama said of the change. “And for the sake of future generations, it cannot become normal.”

Republicans warned the controversial move would worsen the already bitter partisan divide in Washington, complaining it took away a time-honored right for any member of the Senate minority party to filibuster.

Senate GOP leader Mitch McConnell of Kentucky called Thursday’s maneuvering a diversion from the problem-plagued Obamacare issue that has been giving the White House and Democrats political headaches.

“You’ll regret this and you may regret it a lot sooner than you think,” McConnell warned, adding that “the Democratic playbook of broken promises, double standards and raw power — the same playbook that got us Obamacare — has to end. It may take the American people to end it, but it has to end.”

CNN chief political analyst Gloria Borger said Democrats seem to believe that things couldn’t get much worse, with judicial vacancies increasing and Republicans increasing their use of filibusters after an agreement earlier this year that cleared some presidential appointees.

“I think there is probably a little bit of ‘calling your bluff’ going on here; that Harry Reid basically threw up his hands and said, enough of this, it’s time to do it,” Borger said. Now, she added, the question was whether angry Republicans would further harden their positions in the already bitter political climate which she said “will get worse.”

Thursday’s change affected presidential executive nominations such as ambassadors and agency heads, along with judicial nominations except for Supreme Court appointees.

It did not affect the ability of Republicans to filibuster legislation.

Under the old rules, it took 60 votes to break a filibuster of presidential nominees. The change means a simple Senate majority of 51 now suffices in the chamber Democrats currently control with a 55-45 majority.

The nuclear option deployed by Reid allowed a procedural vote that required a simple majority to change the threshold for approving presidential and judicial nominees, instead of a super majority typically required.

Reid followed through on threats dating back years after Republicans blocked three judicial nominees to the D.C. Circuit Court of Appeals, known as the highest court in the land after the Supreme Court.

Both parties have been guilty of political hijinks involving filibusters.

In 2005, Republicans who then held the majority threatened the nuclear option to prevent Democratic filibusters of President George W. Bush’s judicial nominees. The confrontation was averted thanks to an agreement by a bipartisan group of 14 senators.

Obama, then a senator, opposed the nuclear option at that time.

“I urge my Republican colleagues not to go through with changing these rules,” he said on the Senate floor in 2005. “In the long run it is not a good result for either party. One day Democrats will be in the majority again and this rule change will be no fairer to a Republican minority than it is to a Democratic minority.”

Asked about Obama’s past stance compared to his support Thursday for Reid’s move, White House spokesman Josh Earnest cited increased obstruction of Obama nominees for the need to get the Senate working again.

“The circumstances have unfortunately changed for the worse since 2005,” Earnest said, noting that there were 50 judicial vacancies when Obama took office compared to 93 today and that many of the President’s nominees have bipartisan support but can’t get an up-or-down Senate vote.

Furious Republicans accused Reid of reneging on a pledge against using the nuclear option.

“It is another partisan political maneuver to permit the Democratic majority to do whatever it wants to do, and in this case it is to advance the President’s regulatory agenda and the only cure for it that I know is an election,” said veteran GOP Sen. Lamar Alexander of Tennessee.

Until now, Reid hadn’t necessarily had support from enough of his own Democratic caucus to pass a rules change. Some Democratic senators were reluctant to change the rules because of reverence for the institution and, more importantly, because they know Democrats will not always be in the majority.

However, Republicans argued Democrats were just trying to manufacture a crisis in order to create a distraction from the Obamacare rollout debacle.