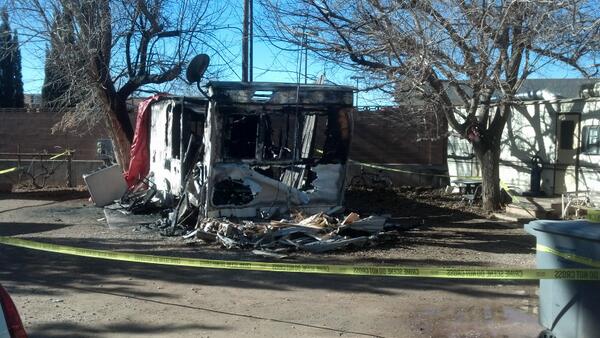 HURRICANE, Utah — A trailer fire in Hurricane left one person dead Wednesday morning, and a woman has been arrested in connection with the blaze.

Fire crews said a travel trailer that was being used as a residence caught fire around 3:30 a.m. in the area of 237 West State Street.

According to Hurricane City Fire Department officials, it was reported that two people were in the trailer when fire crews were called.

Officials said when fire crews arrived, they found the trailer fully engulfed in flames. After extinguishing the fire, crews located a body inside the trailer.

According to a press release from the Hurricane City Police Department, investigators arrested 43-year-old Stacy Barnard and booked her into jail on charges of aggravated arson. The arrest is based on probable cause and evidence that the suspect started the fire, according to the release. Further charges could be filed based on the results of an autopsy being performed by a medical examiner.

According to the press release, there were indications that an accelerant had been used. The deceased is a male who was in a relationship with Barnard. Both were living in the residence. The identity of the victim has not been released.