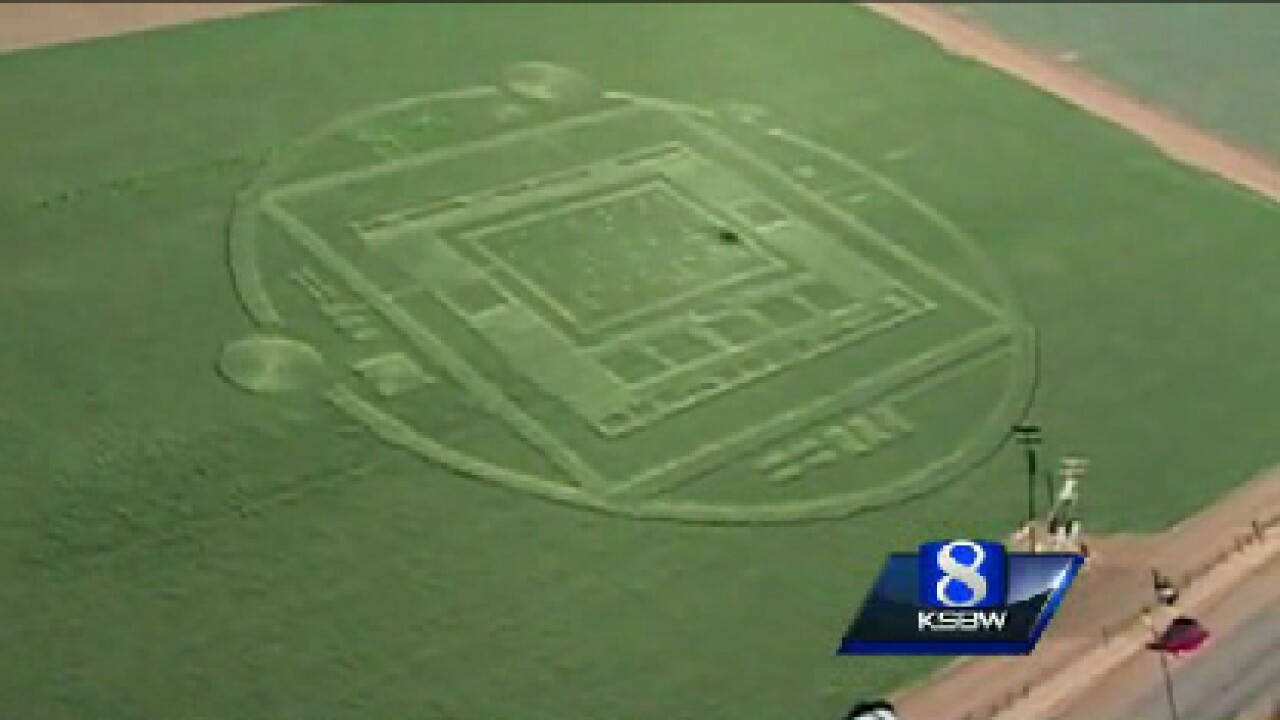 The video above explores the possible meaning behind the crop circle, including its resemblance to Braille writing.

(CNN) — An elaborate crop circle sculpted into a farm two hours south of San Francisco is no more, having been mowed down to the dismay of hundreds who flocked to glimpse the unexplained site.

On Tuesday afternoon, the intricate design etched into a field of barley was plowed back into the earth.

Debra Falanga, a crop circle enthusiast who “definitely believe(s) they are created by other-than-human-beings” — said Wednesday she’s disappointed that it wasn’t kept intact so that people can “go in and experience the energy.”

“When something unusual like this happens, why not let people experience it?” said Falanga, speculating the landowner wants his life “back to normal.”

Still, during the short time it did exist, the crop circle attracted plenty of attention.

It was spotted Monday morning by Julie Belanger, a photographer, as she and her husband flew over in a helicopter.

“What is it?” was her first thought, she told KSBW.

Whatever it was, “it was beautiful, quite beautiful,” she said, adding that they came upon it by chance. She said she was skeptical that the crop circle was evidence of something otherworldly.

“I believe it’s possible that aliens exist, but I don’t know if they would bother making a crop circle to give us a message,” she said.

If they did, what’s the message that was carved into Anthony’s 2,000-acre farm outside the tiny town of Chualar?

Falanga — who called KSBW after seeing a picture — described it as a “very detailed” depiction of the number 192 written over and over in Braille and in such a way to orient the top and bottom of the circle.

“The Braille was so accurately portrayed … That’s hard to do manually…, never mind in a crop circle,” Falanga, a certified Braille transcriber from New Jersey, told CNN. “It looks like a ticker tape of the number 192, 192, 192.”

What to make of that repeated number (if that’s what it is) is another mystery. Falanga said some speculate it is related to the number 192 found in Internet Protocol, or IP, addresses (a fact familiar to many in nearby Silicon Valley). Or it could have something to do with the radioisotope iridium, which has 192 in its symbol.

The theories don’t stop there — including some people’s belief that this is all much ado about nothing.

Anthony described the elaborate design sculpted into one to two acres of his barley field as a lot of squares and rectangles within a large circle.

“To me, it looks like a computer chip or something like that,” Anthony told CNN in a telephone interview Tuesday. “To be that intricate in design, it kind of baffles me as to how that was done.”

Anthony said he was out of town on vacation the week before the discovery, having been alerted to it by a call from an employee on his farm 10 miles southeast of Salinas.

How did it get there? The farmer said he has no idea, adding “it didn’t look burned to me, it just looked like it was pushed over.”

Soon, the news vans showed up, followed by the curious, some of whom stood on fences to get a better view. Anthony called security agents to keep people from crossing onto his farmland, where he also grows broccoli, snap peas and lettuce.

That didn’t stop the roadsides from filling with the curious, many of them self-appointed experts.

“It looks like aliens to me,” Manuel Madrid of nearby Gonzales told KSBW.

“Definitely pranksters,” said Brandon Brooks of Chualar. “This is kind of a strange place to have anything out of the ordinary happen.”

The latter theory got some support from Jim Gillott, who told KSBW that he had seen 20 to 30 people with ladders in the field in the days before the design was discovered.

And Jake Gain said he too had seen evidence that humans were involved.

“Every time I drove by, I saw them either parked over there,” he said, pointing, “or people in the field just walking around, and it looked like they had little GPSes or something,” he said.

And someone identified solely as “Cannot Say” posted a 2½-minute video on YouTube that shows green flashes of light emanating from what appears to be the field before dawn on Monday. “Dude, this is a crop circle,” says one of two men in the video as they clamber from their car into the field.

The founding publisher of Skeptic magazine was unimpressed.

“It looks like a couple of kids did this,” Michael Shermer told CNN. “Short of having a video of it, it’s hard to prove that kids did it. So, in that case, we have to make a choice: what’s more likely? That aliens landed in Chualar, California, or that a couple of pranksters made it?

“We have zero evidence of aliens landing anywhere; we have lots of evidence of pranksters hoaxing.”

Such circles can be made by simply dragging a rope attached to a board over the grass, he said.

Still, he noted, such stories are attractive to many. “People seem less intrigued by pranksters than they do by aliens, so it’s a compelling story for people to think that we’re not alone.”