MURRAY -- A man is wanted in connection with reported arson and the death of an elderly woman in Murray, officials said Saturday morning.

Utah Transit Authority police attempted to stop a man near Murray Central Trax Station for driving through a bus zone. Officer Kenny Bass of the Murray Police Department said the traffic stop, depicted in the videos above, was unusual.

“He was acting a little bit different for a traffic stop, and while he was talking to him, the guy just took off in the car,” he said.

When the driver took off, officers contacted Utah Highway Patrol and gave them the license plate number of the suspected vehicle. The car was tracked back to a Murray home, 20 E. Winchester St.

At approximately 6 a.m. officers arrived to find smoke billowing out of the house, Bass said.

Murray firefighters were called to the scene and discovered a fire in one of the rooms. Crews also found a woman's body.

“It appeared to be contained in a small area of one room in the house," Bass said. "Also in the room was an 85-year-old woman found deceased."

Police identified the woman as Shirley Sharp. They said the woman's family said she was a widow who had lived in the home for many years and was in good health. Police said they have yet to determine a motive or a connection between the suspect and the victim.

“It’s tragic," Bass said. "It’s a horrific event that someone would actually have the mindset to do something like that, it’s awful."

It was not clear how Sharp died. Officials said she had been injured but did not provide specific details.

The suspect is still at large. Police did not provide a description of the man, but dashboard cameras captured several images of him, which are in the gallery below.

Murray resident Jon Williams said it was surprising to have such an incident in the area.

“It’s just sad to me," he said. "You live on the East side of town thinking it’s safe, but I guess you’re not. Somebody lost their life. That’s just not right.” 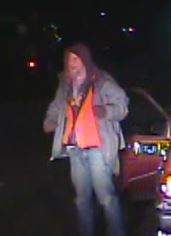