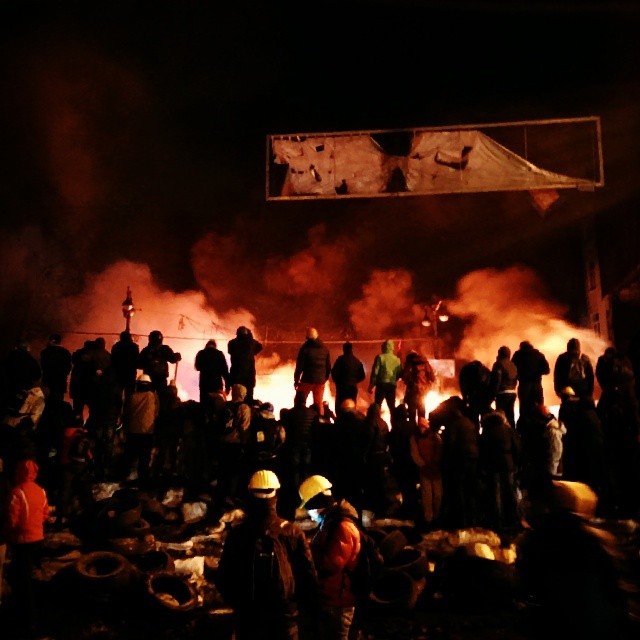 (CNN) — Ukrainian military forces will not interfere in the current political unrest, a government minister said Sunday, despite ongoing protests and clashes that threaten to bring the eastern European country to a standstill.

Opposition leaders have vowed to pursue their demands after rejecting a package of concessions, including government posts, offered by President Viktor Yanukovych.

Thousands of protesters have continuously massed in central Kiev — the power base of the opposition, which seeks the government’s ouster and snap elections — at times clashing with police.

On Sunday, a memorial service was held for a protester was killed in the violence last week. His coffin was carried through snowy Kiev streets amid chants of “Hero” and “He died for us, he died for Ukraine” from the thousands of people, including protest leaders, who had gathered to pay their respects.

Ukraine, a nation of 45 million people, has been thrown into a deepening political crisis after weeks of protests by pro-Europe demonstrators that have escalated into deadly clashes.

But Defense Minister Pavel Lebedev said the military would not intervene.

“The army will abide strictly by the constitution and laws of Ukraine that set clearly its role, functions and tasks, including use of armed forces,” he told Russian state news agency Itar-Tass in an interview on Sunday.

Among the snowy rooftops of the capital, Kiev, smoke can often be seen billowing from the center, where thousands of demonstrators have massed despite the freezing temperatures, setting up makeshift barricades and bombarding police with gasoline bombs.

Scenes of fires, burnt tires, smashed windows and the drumbeats of sticks on corrugated metal have become familiar occurrences on the city’s central arteries.

On Saturday, opposition demonstrators smashed out windows and doors of a government building in Kiev and used fireworks to smoke out police, according to a journalist at the scene.

Opposition leaders said the demonstrators targeted the Ukrainian House because police were launching attacks against them from there.

This came after opposition leader Vitali Klitschko rejected concessions from the government. On Saturday, Yanukovych offered government posts to Klitschko and another leader of an opposing party, the presidential website said.

Arseniy Yatsenyuk, who heads the Fatherland Party, would have become the prime minister and, under the president’s offer, would have been able to dismiss the current government, which has been one of the protesters’ demands.

The president also offered the post of deputy prime minister on humanitarian issues to Klitschko, a former champion boxer known as “Dr. Ironfist.” Yanukovych also said he would agree to a working group to look at changes to the constitution, according to the president’s website.

However, speaking on a public stage where he was joined by heads of other opposition parties, Klitschko rejected the offers. His announcement was greeted by loud cheers from the crowd.

Emboldened, the opposition leaders have said they would press for more concessions — elections and the abolition of sweeping new anti-protest laws.

A special session of parliament is scheduled for Tuesday.

The thousands of protesters who have packed Kiev’s central Independence Square and surrounding streets have shown no signs of leaving. They have set up tent cities and put up barricades, outside of which police have massed.

The clashes are an escalation of weeks of largely peaceful public protests prompted by Yanukovych’s decision in November to spurn a planned trade deal with the European Union and turn toward Russia instead.

More recently, protesters, old and young, have been voicing their anger over new anti-protest laws, passed earlier this month. The controversial new laws have sparked concerns they could be used to put down demonstrations and deny people the right to free speech.

Klitschko’s party, the Ukrainian Democratic Alliance for Reforms, warned on Saturday that authorities are preparing to provoke peaceful protesters and may plant provocateurs among the crowds in an effort to enact emergency rule.

A group of protesters blocked the entrance to the Energy Ministry on Saturday, a move Energy Minister Eduard Stavytsky called a direct threat to the entire energy system. Some protesters entered the building and argued with Stavytsky.

The protesters left the building saying they did not intend to undermine the work of the ministry in any way.

Foreign governments have condemned the escalating violence and the European Union is getting involved in the crisis.

The EU’s commissioner for enlargement and European neighbourhood policy, Stefan Fule, visited Kiev on Friday and Saturday. Next week, EU foreign policy chief Catherine Ashton and a European Parliament delegation are scheduled to travel to Ukraine.

In a statement, Fule said he held talks with Yanukovych and opposition leaders.

“My talks in Kiev showed the need for a series of concrete steps to first start to rebuild trust of people by stopping the spiral of violence and intimidation, to be complemented in a second stage by an inclusive political process leading the stability in Ukraine,” Fule said.