UTAH COUNTY -- A Utah County Sheriff's deputy was fatally shot and another one was injured Thursday afternoon.

The first shooting occurred around 1 p.m. on SR-73 in the Eagle Mountain area.

Utah County Sheriff Jim Tracy said Sgt. Cory Wride pulled up behind a vehicle that looked "either abandoned or disabled" on the side of the road.

"From our preliminary investigation, it appears that Sgt. Wride was ambushed at that time and he was shot in the vehicle and he did not survive his wounds," Tracy said.

A second deputy engaged the suspect in a high-speed chase in the Santaquin area. The deputy was shot near the intersection of Center St. and Main St.

The second officer shot was later identified as 38-year-old Deputy Greg Sherwood, a 13-year law enforcement veteran who had worked as a K-9 handler with the Utah County Sheriff's Office for two years.

Sherwood sustained a head wound and was taken to Utah Valley Regional Medical Center for surgery. He was reported as being in critical condition on Thursday night, and the extent of his head injury was unknown. Tracy said his prognosis appeared to be good.

The suspect then went south on I-15 and was involved in a crash with another vehicle in the Nephi area.

Tracy said the suspect encountered several people after the crash and opened fire before hijacking a vehicle.

"At this point, we don't believe anybody was hit in that third location," Tracy said.

The suspect continued south on I-15 and encountered some sheriff's deputies from Juab County and was involved in another crash.

"He was engaged by the deputies of Juab County and another firefight ensued and the suspect was critically wounded," Tracy said.

The suspect was also taken to Utah Valley Regional Medical Center for surgery. He is expected to survive.

Officers have not identified the suspect, only saying that he has an extensive criminal history.

Neighbors say a man believed to be the suspect had been staying in a Draper home, located near 12300 South and 300 East, and officers served a search warrant on that home Thursday night.

One neighbor said that the man and woman living in the home had not been seen for weeks.

"A warrant for a suspect that was involved in the police shooting today. He was pulled up and was unloading things from his garage and was putting things in his truck," said neighbor Patti Hart. "We haven't seen the guy that lives there for a couple weeks."

A woman, who is considered a suspect, was taken into custody Thursday night. 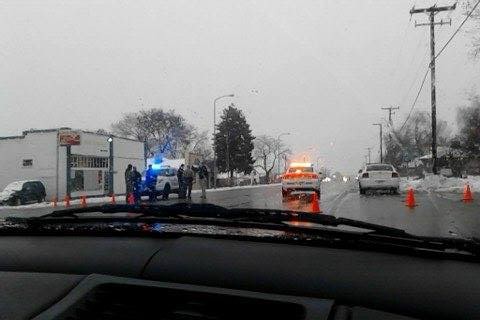