Wife of slain officer speaks of forgiveness at candlelight vigil

SPANISH FORK, Utah – A candlelight vigil honoring two Utah police officers who were shot in the line of duty this week was underway in Spanish Fork City Sunday night.

The vigil was held at the Sports Park, 295 West Volunteer Drive, beginning at 8 p.m., and the Utah County Sheriff’s Office and Spanish Fork Police Department invited the public to attend the event, which was set to feature a short program.

Sgt. Cory Wride was shot and killed and Deputy Greg Sherwood was critically injured Thursday during a series of shootings and chases, during which the suspect in the shootings was wounded. The suspect later died.

"The man that shot Cory, that our family holds no malice or anything towards them and our hearts go out to their family because they are going through the same grieving process that I'm going through and my family's going through, and we hope that in your thoughts and prayers that you'll put them in there too.. I know that some people are angry and stuff, but please just let that go," she said at the vigil.

"Greg is doing great," she said. "He's being a smart alec and obnoxious as ever - it' been great for the officers to come in and see him, and you can just see the weight off their shoulders lifted when they see that he's still Sherwood."

Krystal Lazenby was one who came out to support the families at the vigil, and she said it was powerful to see such support from other police officers.

"It was even emotional just driving here knowing what we were coming into - coming with the other officers, driving in with their lights on... really hard to contain emotion," she said.

Well-wishers crowded the procession route Friday as Wride’s body was returned home, and afuneral for Wride is scheduled for Wednesday at 11 a.m. at Utah Valley University. The funeral will be held in the UCCU Center.

Wride leaves behind a wife and five children, and a fund has been created to assist them with expenses. If you would like to make a contribution, click here. 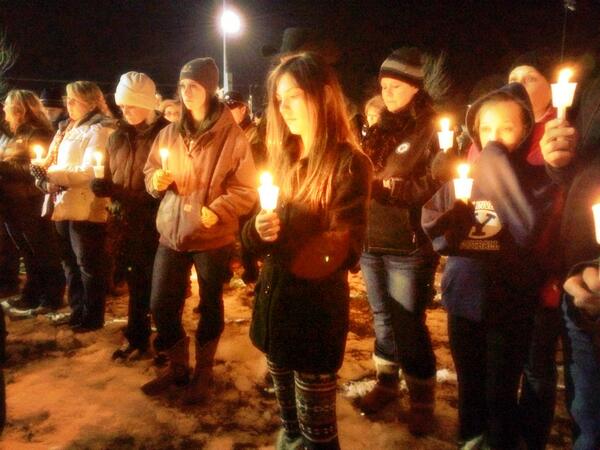