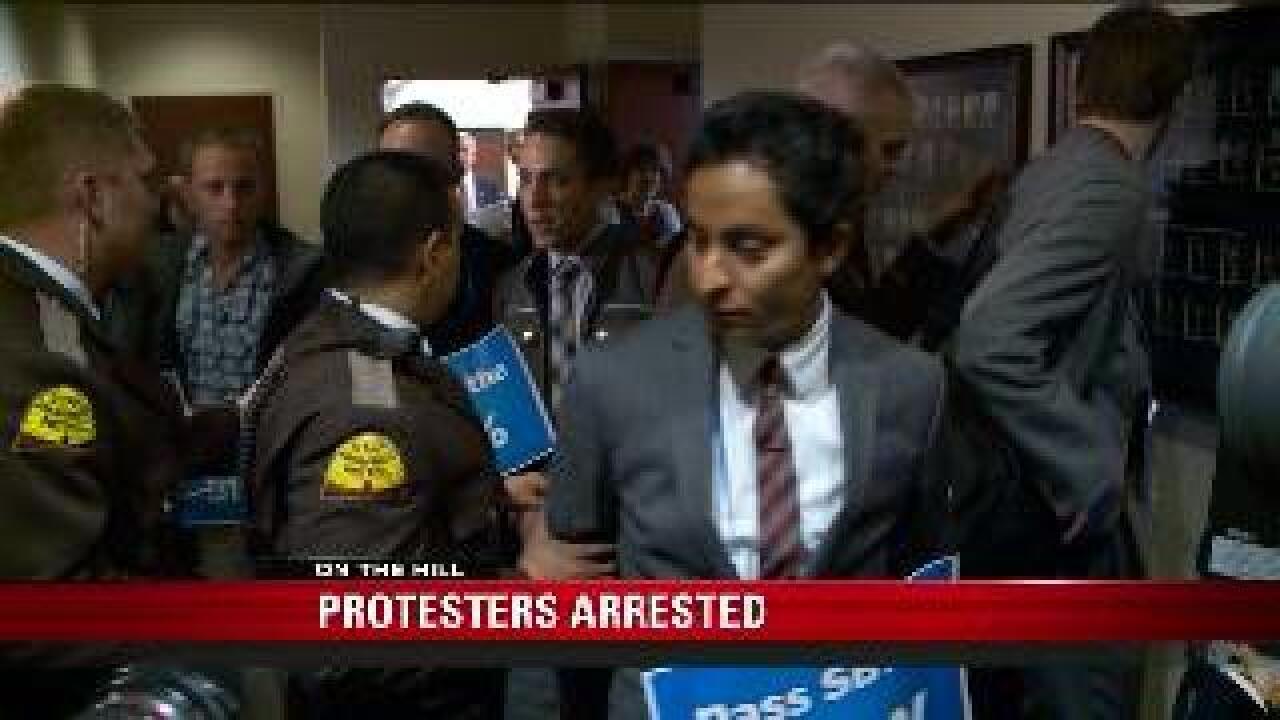 SALT LAKE CITY -- Thirteen gay rights activists were arrested after blockading the entrance to a legislative committee hearing, demanding that a nondiscrimination bill be heard.

They were handcuffed after a day long demonstration that began Monday morning outside Governor Gary Herbert's Office, then moved to a committee hearing. They were demanding that Senate Bill 100 be considered.

"If the democratic process won't work, and if we're allowed for procedural things like tabling to stop hearing things like the nondiscrimination bill, it's time for regular citizens to engage in peaceful acts like civil disobedience," said Dustin Trent, who was led away in handcuffs.

SB 100, which would prohibit discrimination in housing and employment based on sexual orientation, will not be heard this year. Neither will any other bills dealing with gay rights or religious freedom, because it may affect the state's appeal of Amendment 3.

"Amendment 3 is a convenient excuse not to be heard," said LGBT activist Troy Williams. "We demand to be heard!"

The group began standing in front of the governor's office doors about 9:30 a.m. Monday. By mid-day, they had blockaded several people from getting to appointments. Governor's staffers ferried those people in and out through side doors.

"I would like to see their passion and zeal directed in a way that is far more fruitful," Utah Log Cabin Republicans president James Humphries told FOX 13 as he left the governor's office.

"I don't want to see anyone arrested," Urquhart said, pleading with the protesters to give him time to approach the Senate GOP caucus, or to set up a town hall meeting next week to talk about SB 100.

The demonstrators refused to budge.

As the hours dragged on, the protestors sat in front of the governor's office. Senate leadership insisted that SB 100 would not likely make it out of the rules committee, as it did not have the votes.

"The frustration that has driven these Utahns to take direct action is understandable," the gay rights group Equality Utah, said in a tweet.

Last year, a federal judge in Salt Lake City declared Amendment 3 -- which defines marriage as between a man and a woman and does not recognize anything else -- unconstitutional. In 17 days, more than 1,300 same-sex couples wed in Utah until the U.S. Supreme Court granted the state's request for a stay pending appeal.

The 10th U.S. Circuit Court of Appeals will hear arguments in the case in April. Legislative leadership has agreed to not hear any bills either for or against gay rights so as not to show "animus" toward the LGBT community as the appeal goes forward.

LGBT activists protesting outside the governor's office insisted that not hearing SB 100 was showing "animus."

Outside the committee hearing, lawmakers and committee hearing attendees were frustrated with the protesters. Sen. Stuart Reid, R-Ogden, asked them to move and when the demonstrators wouldn't budget, summoned the UHP.

Utah Department of Public Safety spokesman Dwayne Baird said the 13 were arrested on suspicion of disruption of a public meeting, a class B misdemeanor; and disorderly conduct, a class C misdemeanor. They were taken to the Salt Lake County Jail to be booked and released.

"Equality is worth it!" one activist shouted as he was led away in handcuffs.