SALT LAKE CITY -- Officials announced Saturday an arrest had been made in connection with a 4-alarm fire that broke out at an apartment complex still under construction in downtown Salt Lake City.

In an email, Sgt. Cammie Scogg, a public information officer for the Salt Lake County Sheriff's Office, provided arrest information for an individual facing charges that appear to be tied to the fire.

According to a probable cause statement from the sheriff's office, on Friday "Dustin Bowman... stated that he did intentionally start a fire in the structure at 540 East 500 South on 02/09/2014 that resulted in a monetary loss greater than $5,000."

The blaze on February 9 sent flames as high as 100 feet into the air, and the fire could be seen from numerous areas across the Salt Lake Valley.

A press release from the Bureau of Alcohol, Tobacco, Firearms and Explosives announced that an arrest had been made in connection with the fire, but they did not identify the suspect.

Investigators are still examining the scene, and, according to the release from the ATF, "due to the ongoing investigation and continuing judicial process no further information can be released at this time."

In a follow up email, Skogg said: "There is some question as to whether or not this is the suspect that was arrested in connection to the downtown SLC fire; I have spoken to SLC Fire PIO Jasen Asay and they are not confirming or releasing suspect information at this time.

The booking information I sent was based off of charge information alone and therefore I too cannot confirm if this is in fact the person that you were inquiring about."

The address of the fire listed in the probable cause statement is the same address provided by the ATF in their press release.

According to the probable cause statement, the charges Bowman faces include, felony arson, refusing to pay legal fare and failure to appear.

Officials said last week they had made an arrest after an individual falsely claimed to be a firefighter. ATF officials said Saturday's announcement was not related to the individual who was arrested on the day of the fire. 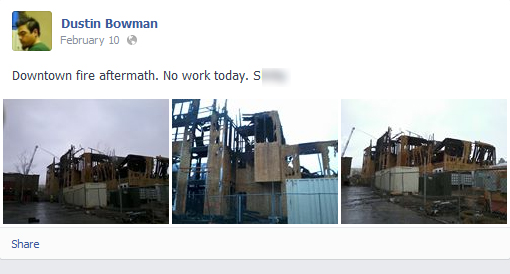