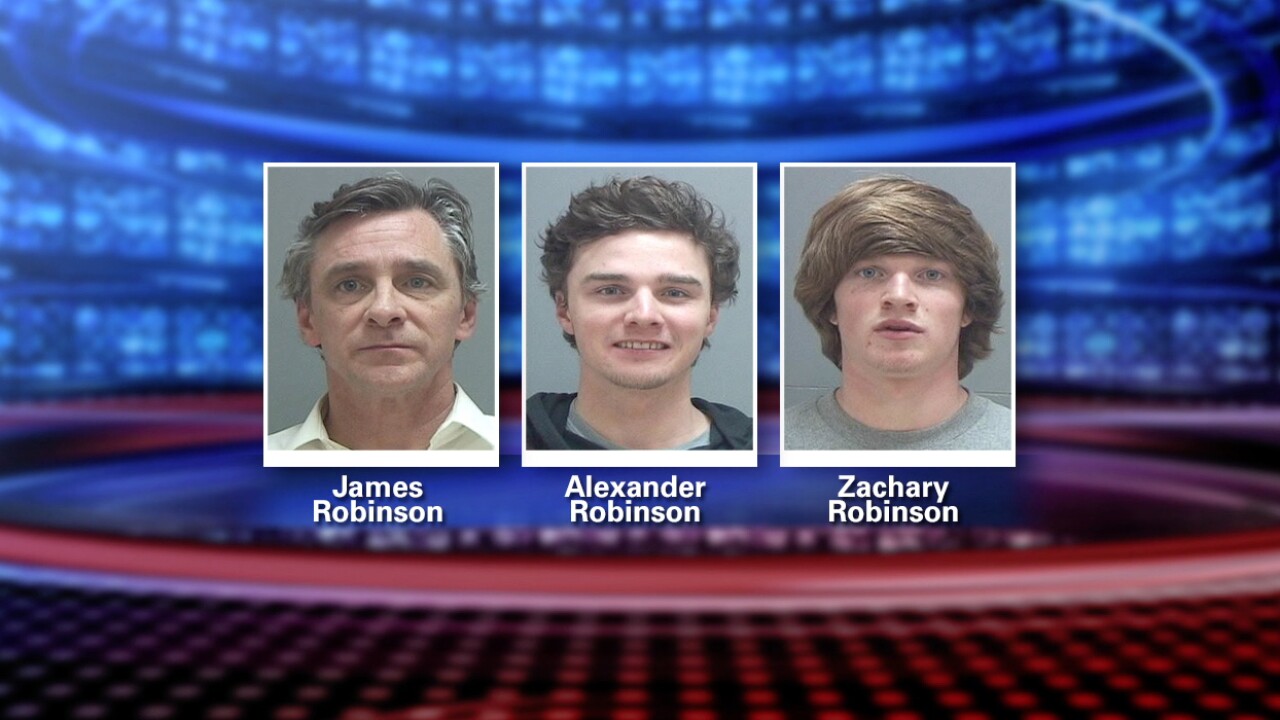 SALT LAKE CITY -- An attorney for Salt Lake City who worked with the Salt Lake City Police Department on civil matters was released from jail on bail earlier this week, but on Friday a warrant was issued for his arrest.

Formal charges were filed Friday against James Wesley Robinson, who was arrested Tuesday night along with his two sons, Alexander and Zachary, after police executed a search warrant at their home.

"He was the civil attorney for Salt Lake City, and he was also the appointed attorney to work with the Salt Lake City Police Department as their representative and their adviser," he said.

Warrants have also been issued Friday for the arrest of the father and his two sons, each with a $100,000 bail. James Robinson was booked into jail Wednesday but he bailed out Thursday.

“One of them is when you have drugs, a certain amount of drugs in the proximity of firearms, then you’re enhanced to a restricted person,” she said. “That’s why he was booked as a restricted person. There’s also an enhancement because on this case it’s within 1,000 feet of a school, and there’s another enhancement on the case as well.”

The documents provide additional details regarding the arrest. The search warrant was obtained after an officer responding to a burglary complaint was invited into the home by James Robinson. The officer stated there was an odor of marijuana and there were bongs and other paraphernalia in plain view.

"What they discovered was a large quantity of cash in the premises, $26,000 in cash, they also had several weapons as well as a lab setting which was being used to distill THC into its raw form," Gill said.

Officers also found a caramel-like substance that field-tested positive for THC. The substance, often called "Dab" or "Shatter", is a marijuana byproduct that is much stronger than regular marijuana.

In the basement, officers found a pressure cooker with hoses leading to an air compressor. Officers also found glass tubes, a butane torch, and glass with "Dab" residue on it.

In James Robinson's room, police found a 9 mm handgun and a vile containing a substance that field-tested positive for cocaine.

In Alexander Robinson's room, police found paraphernalia, "Dab", a scale, a vacuum sealer and $2,500 in cash.

Both Alexander and Zachary face one count each of clandestine laboratory precursors and/or equipment enhanced, possession of a controlled substance with intent to distribute and possession of drug paraphernalia.

An officer stated in the documents that the Robinson residence is located within 400 feet of Clayton Middle School property.

A witness told police that she had purchased marijuana from Alex and Zach Robinson on numerous occasions, and she said she could see large quantities of marijuana in the home.

Gill said it isn't uncommon for drug activity to be occurring within a family.

"It's unfortunate that we have a father and two children, but I wish I could say to you that this is something that's strange: It's not," he said. "Unfortunately in our community, and when there are drugs involved and crimes occur, unfortunately we see a lot of familial connections. I wish I could say this is something unique and something we don't see daily, out of the hundreds of cases that we file we see those familial connections all the time."