SANDY, Utah -- A high-speed chase that originated in Utah County ended with a violent crash in Sandy Monday morning and two arrests.

Police said the pursuit began in American Fork when two people allegedly tried to rob a Wal-Mart store at knifepoint. The suspects then fled the scene in a gold Buick and led police on a chase on northbound I-15.

Police identified one suspect as 27-year-old Ramen Quinteze Powell. Lt. Sam Liddiard of the American Fork Police Department said the suspect displayed a weapon as he was taking four large, flat-screen televisions from the store.

“Went ahead and grabbed the carts," He said. "As he walked by, he had the knife in his hand and reached out and slashed at the asset protection manager, so he just backed off and let him walk out the door,” Liddiard said.

The chase ended when the Buick crashed near the I-15 off-ramp at 9000 S in Sandy. A pickup truck and an SUV were also involved in the crash.

Kelley Clark witnessed the crash, and she spoke about the scene.

“Just looking in my rear view mirror while merging with oncoming traffic and noticed a gold car coming up behind me rather quickly,” she said.

Clark said the car was going fast and sounded loud, and she also noticed a side-view mirror hanging from the car.

“It was just kind of dangling, which just didn’t really fit with the situation; the passenger in the car was kind of in the backseat and seemed to be  leaning between the driver and passenger seat which to me seemed strange for a speeding car on the freeway,” she said.

Police said spikes were deployed to stop the vehicle.

“The vehicle was spiked by Lehi Police Department," Liddiard said. "A set of spikes were deployed and a tire ran over those tire spikes."

Liddiard said Powell faces charges of aggravated robbery, theft, evading and four counts of aggravated assault. Police are still working to determine what charges, if any, they will file against the female who was with Powell.

The crash forced lane closures on 9000 S near 150 W. The Utah Department of Transportation reported all lanes were open again shortly after 11 a.m. Monday morning. 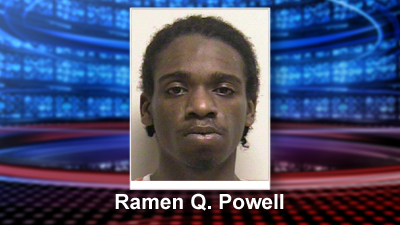