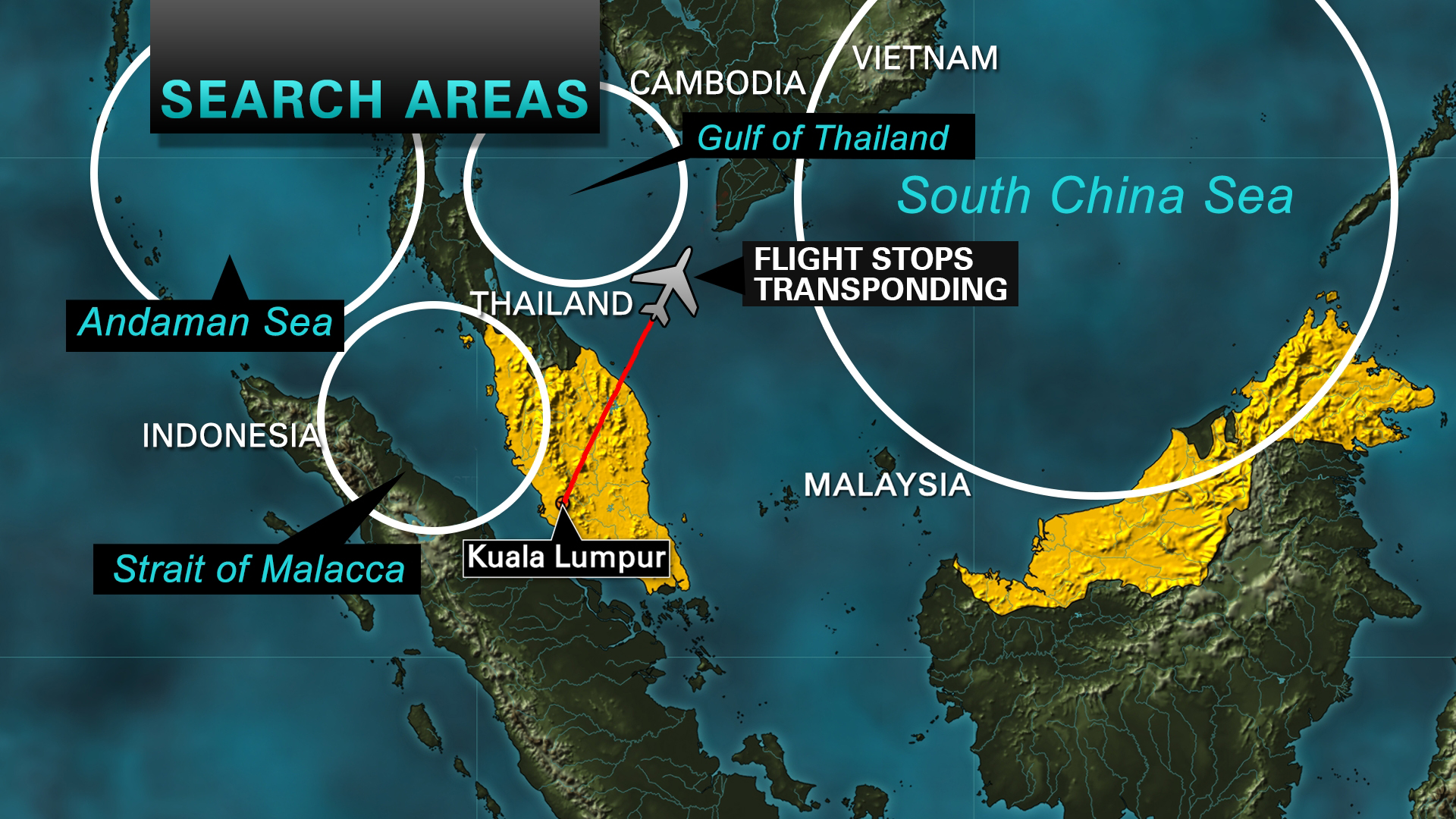 (CNN) — It’s a mystery that authorities still haven’t been able to solve: Where is Malaysia Airlines Flight 370?

There were still more questions than answers Thursday as U.S. officials said investigators will start combing the Indian Ocean as they look for the missing aircraft.

Why would authorities expand their search rather than narrowing it?

Malaysian authorities believe they have several “pings” from the airliner’s service data system, known as ACARS, transmitted to satellites in the four to five hours after the last transponder signal, suggesting the plane flew to the Indian Ocean, a senior U.S. official told CNN. That information combined with known radar data and knowledge of fuel range leads officials to believe the plane may have made it to that ocean, which is in the opposite direction of the plane’s original route.

“There is probably a significant likelihood” that the aircraft is now on the bottom of the Indian Ocean, the official said, citing information Malaysia has shared with the United States.

It’s the latest twist in a case that’s baffled investigators and grabbed global attention for days since the plane disappeared on its way from Kuala Lumpur to Beijing. Information about the missing flight has been hard to come by, and numerous leads have been revealed by some officials only to be debunked by others hours later.

This new information led to a decision to move the USS Kidd into the Indian Ocean to begin searching that area, the official said.

The Navy destroyer is now on its way there at the request of the Malaysian government, Cmdr. William Marks of the U.S. 7th Fleet told CNN’s Wolf Blitzer Thursday.

“We’re not out here freelancing, and it’s not just something the U.S. Navy thinks and no one else,” Marks said. “So this was by request of the Malaysian government. They asked the Navy to move our ship to the west into the Strait of Malacca. … It is coordinated, but certain ships and aircraft stay in the east, and some go to the west. And we’re moving to the west.”

It won’t be easy to search such a wide area, he said. Moving into the Indian Ocean, Marks said, is like going “from a chess board to a football field.”

“It’s a completely new game. … Now we have to come up with a new strategy, new tactics,” he said.

There are conflicting reports about this latest lead as well.

Earlier Thursday the Malaysian government denied a Wall Street Journal report that the plane was transmitting data after the last transponder signal.

And a senior aviation source with detailed knowledge of the matter also told CNN’s Richard Quest on Thursday that there was no technical data suggesting the airplane continued flying for four hours, and said specifically that the Wall Street Journal account was wrong.

But U.S. officials maintained Thursday afternoon that the information from the airplane’s data system was being actively pursued in the plane investigation.

Analysts from U.S. intelligence, the Federal Aviation Administration and the National Transportation Safety Board have concluded that the pings likely came from the missing aircraft, the senior U.S. official said.

There is reason to believe the plane flew for four hours, officials said, but there is no specific indication where the plane actually is.

Multiple bursts of data were received indicating the plane was flying over the Indian Ocean, the senior U.S. official told CNN.

But there’s another confusing twist. An emergency beacon that would have sent data upon impact apparently did not go off, the official said. The beacons, known as Emergency Locator Transmitters, activate automatically upon immersion in fresh or salt water, but must remain on the surface for a distress signal to transmit.

The failure of the beacon to activate could mean that the plane didn’t crash, that the transmitter malfunctioned, or that it’s underwater somewhere.

Mary Schiavo, former inspector general for the U.S. Department of Transportation, said even though it’s unclear how accurate the latest information is, authorities have no choice but to pursue it.

“Well I think basically given that there is some information — how reliable or not — we have to respond,” she said. “There is no way we cannot follow up on this lead. It would be inhumane. And it might turn out to be just the lead we need. … There isn’t much, but I think we have to do it.”

So are we any closer to knowing whether a mechanical problem, terrorism or hijacking could be tied to the plane’s disappearance?

“The sad thing here is, we don’t have enough information to say, ‘It’s not this, it’s not that,'” she told CNN’s Don Lemon. “We’re still at the point, six days later, it could be anything, and that’s the frustrating thing.”

“This is beginning to come together to say that …this had to have been some sort of deliberate act,” ABC aviation analyst John Nance told CNN’s Erin Burnett.

White House spokesman Jay Carney didn’t go into details when he discussed the search for the plane Thursday, but he said “some new information that’s not necessarily conclusive” could lead U.S. searchers to the Indian Ocean.

“We are looking at information, pursuing possible leads, working within the investigation being led by the Malaysian government, and it is my understanding that one possible piece of information or collection of pieces of information has led to the possibility that a new search area may be opened,” Carney said.

Originally, a report from The Wall Street Journal said data from the plane’s Rolls-Royce engine had raised questions among some U.S. officials about whether the plane had been steered off course “with the intention of using it later for another purpose,” the newspaper reported, citing a “person familiar with the matter.”

The newspaper later corrected its story, saying that data leading investigators to believe the plane had flown for up to five hours came from the plane’s satellite-communication link, which the newspaper said is “designed to automatically transmit the status of certain onboard systems to the ground.”

And Malaysia Airlines Chief Executive Ahmad Jauhari Yahya said that Rolls-Royce and Boeing have reported that they didn’t receive transmissions of any kind after 1:07 a.m. Saturday. Air traffic controllers lost contact with the plane shortly afterward, around 1:30 a.m.

Erin Atan, a spokeswoman for Rolls-Royce in Asia, declined to comment on the matter, telling CNN it was “an official air accident investigation.”

Authorities have not ruled out the possibility the plane continued to fly, however. And given the lack of evidence, all options remain on the table.

Four more hours in the air could have put the plane many hundreds of miles beyond the area currently being searched.

But one aviation industry observer expressed skepticism about the report even before the denials by officials.

“I find this very, very difficult to believe,” Tom Ballantyne, chief correspondent for the magazine Orient Aviation, told CNN. “That this aircraft could have flown on for four hours after it disappeared and not have been picked up by someone’s radar and not have been seen by anyone, it’s almost unbelievable.”

The mystery over the fate of the passenger jet, a Boeing 777-200, and the 239 people it was carrying has so far left government officials and aviation experts flummoxed.

Searchers have already been combing a vast area of sea and land for traces of the plane. But so far, after six days of searching, their efforts have been fruitless.

Chinese officials originally described the images as showing “a suspected crash site” between Malaysia and Vietnam, not far from the plane’s expected flight path.

But Hishammuddin later said the images didn’t actually show any debris relating to the plane.

Malaysian officials say they are still trying to determine if a radar blip detected heading west soon after the plane lost contact was in fact the missing jet.

If it was, the plane would have been hundreds of miles off its original flight path and headed in the wrong direction. Malaysian officials say they have asked U.S. experts to help them analyze the radar data.

Meanwhile, India is joining the multinational search, dispatching two of its naval ships off the remote Andaman and Nicobar islands, a military spokesman told CNN.

Also on Thursday, a Malaysian aviation official told CNN that the last known words from the flight crew of the missing plane were “All right, good night.”

Malaysian civil aviation officer Zulazri Mohd Ahnuar said he couldn’t confirm which member of the flight crew sent the message, which was transmitted from the plane back to Malaysian flight controllers as the aircraft transferred into Vietnamese airspace early Saturday.

For the families of those on board the missing plane, the wait for news is torturous.

Danica Weeks is trying to keep it together for her two young sons, though the possibility of life without husband Paul, who was on the plane, is sometimes overwhelming. She’s clinging to hope even though, as Weeks told CNN’s Piers Morgan, it’s “not looking good.”

“Every day, it just seems like it’s an eternity, it’s an absolute eternity,” Weeks said from Australia. “We can only go minute by minute … and hope something comes soon.”