(CNN) — A US Airways plane blew a tire while taking off Thursday evening at Philadelphia International Airport, prompting it to abruptly come to a stop, an airline spokesman said.

Todd Lechmacher, the US Airways spokesman, said there were no initial reports of injuries, as did Federal Aviation Administration spokesman Jim Peters. But a Philadelphia fire department spokesman told CNN that there was one minor injury.

Passengers on the Florida-bound flight were evacuated from the plane onto the runway and waited to be picked up, according to Lechmacher.

CNN first learned of the incident via tweets from people at the airport.

The aircraft, an Airbus A320 with 149 passengers and five crew members on board, never caught fire, said Lechmacher.

Flight 1702 was scheduled to take-off at 5:50 p.m. and arrive in southern Florida about three hours later, according to US Airways’ website, though the FAA’s Peters said the incident took place around 6:25 p.m.

Departing and incoming flights at the Pennsylvania airport were temporarily halted. They resumed around 6:55 p.m., Peters of the FAA said, though one runway remained closed about one hour after that.

Images from the airport showed the plane pitched forward, but otherwise upright, and surrounded by flashing emergency vehicles. One showed the plane at a standstill as some people left from an emergency slide and others got out on the wing.

“So my plane just crashed,” tweeted one apparent passenger. A short time later and minutes before taking a selfie at the scene, she added, “I almost just died.” 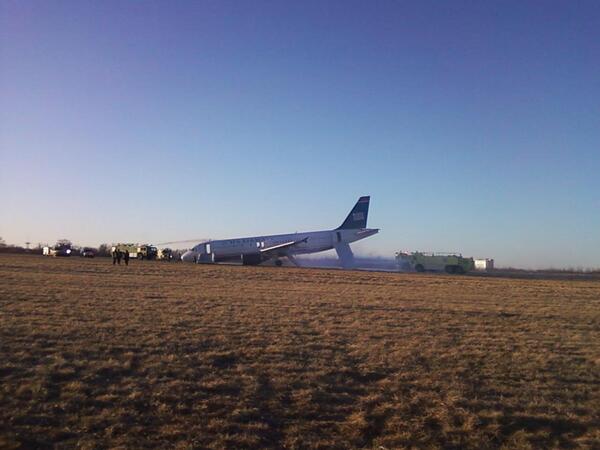