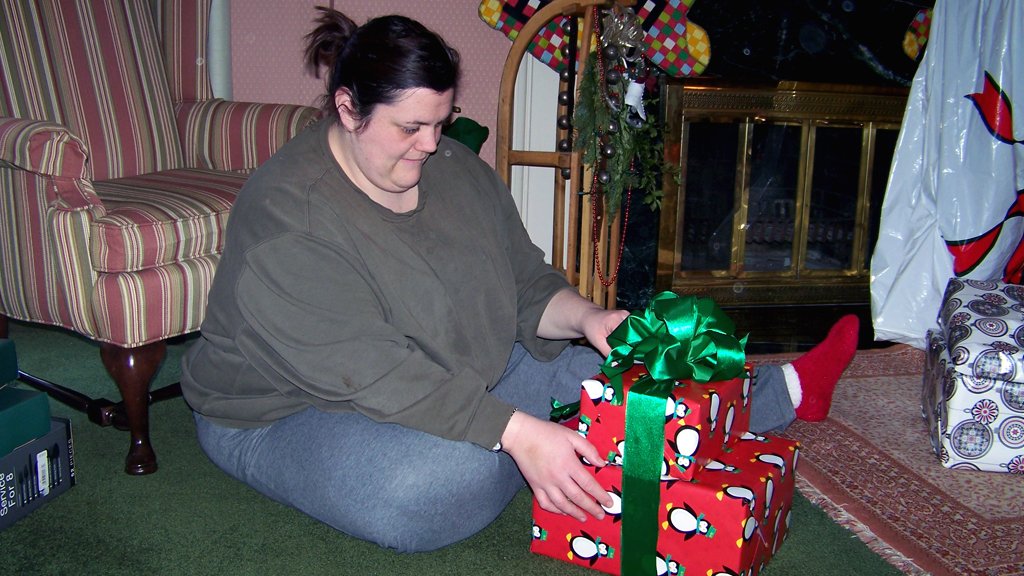 (CNN) — Sara Lugger was skeptical as she placed her first $5 bet. But she realized that all she had to lose was weight — and a few bucks if the money didn’t motivate her to get in shape.

A friend’s success had inspired Lugger to join DietBet, a website that hosts private and public games where people can bet on their own weight loss. Each game sets a goal, such as losing 4% of your body weight, and users who reach that goal split the pot.

She had struggled with obesity most of her life. In the ninth grade, she was diagnosed with ulcerative colitis, and doctors put her on prednisone. The steroid made it difficult for her to maintain a normal weight.

But in 2004, Lugger had surgery to fix the colitis. “From there on out, I couldn’t blame anything but my poor habits.”

Shortly after her birthday in February 2013, Lugger decided that reaching 350 pounds would be “unacceptable.” The Oxford, Michigan, resident realized that her weight was holding her back from doing the things she wanted to do.

She had been the heaviest person in her college classes, where she studied to become a physical therapist. And although family and friends never said anything outright, she noticed they didn’t exactly try to set her up on dates.

She avoided social situations and outdoor activities that might call attention to her size, and she worried about traveling because fitting in an airplane seat was difficult.

“For weeks before I flew, that would be on my mind,” she said.

After signing up for DietBet, Lugger made a plan. She threw out all the junk food in her house. She decided she would wake up 30 minutes early every morning to work out on her elliptical machine. Then, at lunch, she would use the physical therapy equipment at her office to strength train. That way, if she wanted to go out with friends in the evening, she wouldn’t miss a workout.

“I have never seen her so driven and persistent on a goal,” her friend Travis Summerville said. “I don’t know where that came from, but she chose a simple exercise regimen and diet style that worked well for her, and she just kept at it consistently.”

Lugger traded her morning bowl of cereal for a protein shake. She stopped frequenting fast-food places and instead used Pinterest to find lighter fare to cook at home. She now keeps to a 1,200-calorie-a-day diet.

Losing weight did happen. Lugger loved the support she found from her group on DietBet and signed up for two more games after the first one ended. Over time, she upped her bets to $10 and then $50 as she gained confidence — and lost 140 pounds.

Lugger’s friend Christie Williams has also lost 60 pounds using the site. Looking back, Williams is amazed at how heavy she and Lugger once were. But what she’s always loved about her friend is still there, Williams says.

“I don’t believe Sara has changed as a person. She still laughs loud, dances crazy and screams at the wrong parts in horror movies. What has changed is the activities we do. It’s not always takeout pizza and two movies. We’ll go walk a couple of miles or play “Just Dance” before we go out to eat.”

The friends are training for an upcoming 5K and helping each other maintain their slimmer figures.

“We are holding each other accountable,” Williams said. “My biggest fear was (Lugger) having a heart attack at age 45. That fear is gone, and I don’t want it back. … It’s never going to be easy, but it will be easier than losing her at a young age.”

Overall, Lugger has won more than $330 on DietBet. She’s also won a new outlook on life.

Lugger used to tell her friends — and herself — that she didn’t like basketball because she knew she wouldn’t fit into the arena seats. Now she’s a Detroit Pistons fan.

“Turns out, I really like basketball,” she said with a laugh.

Lugger is also traveling more. And shopping. She loves dressing in clothes she feels express her style instead of trying to hide in the background.

“I’m finding me more, and that’s a really neat thing.”